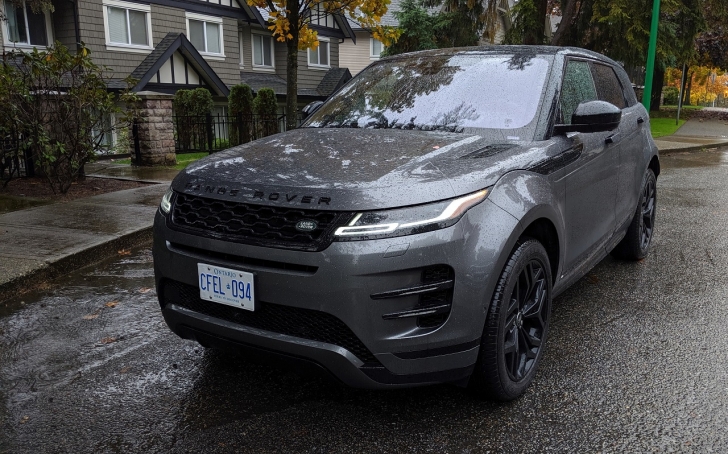 The Evoque is the smallest Range Rover vehicle you can buy; it has been on sale since the 2012 model year in Canada and the United States. The Evoque is quite a popular vehicle, especially in Europe, with total worldwide sales just shy of the one-million-unit mark.

All trims of the Evoque come with a turbocharged 2.0-liter 4-cylinder gasoline engine; the base and First Edition trims (P250) engine produces 246 horsepower and 269 pound-feet of torque, while the R-Dynamic increases horsepower to 296 and 295 pound-feet of torque (P300). A diesel engine is offered in Europe, no word on whether that engine will make it to Canadian shores. Power is sent to all four wheels via a 9-speed automatic transmission.

The P300 engine is a mild hybrid (MHEV), the system harvest energy during braking and deceleration and deploys it to assist in acceleration and helps with running some of the electronic components of the car. The engine shuts off as you’re decelerating, below 20 km/h and with a certain amount of pressure on the brake, and also harvest the kinetic energy from that process. It’s a pretty seamless system and does help a bit with fuel savings and carbon emissions, as you’re not idling and spewing out gases when stopped.

The 2020 Range Rover Evoque is quite fun to drive, especially in the P300 guise with the added horsepower and torque. The small turbocharged engine punches above its weight, and I was quite surprised by the responsiveness of the Evoque. The Evoque takes off quite quickly from a standstill, some of which can be attributed to the power provided by the MHEV system.

Driving the Evoque feels more like a car than an SUV/CUV, it’s actually pretty fun to take into tight corners, thanks to its torque-vectoring by braking system. The Evoque comes with 6 pre-set driving modes (Terrain Response 2): Eco, Comfort, Grass/Gravel/Snow, Mud/Ruts, Sand, and Auto.

The Evoque is a great little CUV for the city, it’s also quite good at highway speeds, passing slower cars is accomplished quite easily, thanks to the availability of the 295 pound-feet of torque between 1,500 – 4,500 rpm.

Most people probably will never take their Range Rover Evoque off-roading, but it is capable of being driven in some rough conditions. The week I was reviewing the Evoque happened to fall during the week when the Land Rover Above & Beyond Tour was taking place in our town, so I went to see/drive the Evoque on the off-road course. I went to a similar course a few years ago with the first generation Evoque, I was extremely impressed by the capabilities of the Evoque back then. The course this year was much smaller but it still showcased the off-road capabilities of the smallest Range Rover, it was impressive again. See photos below.

In addition to the Terrain Response 2 system, the Range Rover Evoque comes with quite a few other useful features, features like “Clearsight Ground View”, which displays a video from under the front of the car, so you can manage going around or over large obstacles when off-roading. Another feature is “Wade Sensing”, this system uses ultrasonic sensors under the side mirrors to alert the driver, visually and audibly, when the vehicles approaches its wading depth of 23.62 inches (60 cm). All Terrain Progress Control lets you set and maintain a steady speed between 1.8 and 30 km/h, it’s like cruise control but for off-road or challenging conditions. In addition to these, the standard Hill Descent Control system, which was a Land Rover innovation, is also available.

I thought the first-generation Range Rover Evoque was quite stylish, the second generation Evoque is even more stylish in my opinion. It’s a mix between the original Evoque and the Range Rover Velar, which is a very sleek looking SUV.

As I mentioned earlier, according to JLR, the new and old Evoque share almost no parts, but the overall look and shape of the new Evoque is distinctly Evoque. The overall shape looks almost exactly the same. The biggest difference in styling is the front and rear, the headlights feature the new styling on all Range Rovers, which first debuted on the Velar.

The Evoque still features short overhangs at the front and back, which I was a big fan of. It also comes with retractable door handles, which is becoming quite popular, JLR first introduced these on the F-Type sports car.

Like the exterior, the interior on the 2020 Range Rover Evoque looks familiar but is a modernized version of the original Evoque. There are a few things that catch the eye upon entering the cockpit of the new Evoque, the first is the addition of a touchscreen below where you’d find the typical infotainment touchscreen. Again, this system first debuted on the Range Rover Velar; the Jaguar I-Pace EV also uses a variation of this system.

This second screen does give the Evoque a much cleaner and futuristic look. This screen controls the climate system, seats (heated/cooled with massage), vehicle driving modes, and vehicle settings. There are two large knobs integrated into the touchscreen, which change their function depending on which sub-menu you’re in. For example, in the climate menu, the left knob controls the temperature and the right one controls the fan speed, pushing the knob lets you adjust the heating/cooling levels of the seats. It is a fairly easy system to use and does pack a lot of different functions into a small space, without overwhelming you, thanks to the different sub-menus. The screen is responsive and the graphics are crisp. When I first heard about this system, I didn’t think it would be this easy to use but I was pleasantly surprised.

Above this screen is the more typical infotainment screen, which displays the maps from the Navigation system, media, phone/contacts, and video from the cameras around the vehicle. This screen also has crisp and modern graphics, with easy-on-the-eyes navigation map graphics.

There’s also another TFT screen behind the steering wheel, where you’d find analogue gauges. This large screen displays digital gauges, which you can change between different modes and even turn the entire screen into a huge map. This screen can also display other information like trip computer, fuel consumption, distance traveled, and driving range.

The other major difference on the interior is the addition of a gear lever, instead of the rotary knob that sinks down when you turn off the car. Personally, I have always thought and said, that knob belongs more on their big luxury vehicles (like the Jaguar XJ and full-size Range Rover), the more sporty vehicles like the Evoque (Velar, RR Sport, XF, XE etc) should come with this gear lever, which give the vehicle a sportier look and feel. And thankfully it has been added to the Evoque and I believe they’re going to be (or already have) adding it to their sporty vehicles.

The steering wheels also features small touchscreens, which at first seem like typical buttons but they slightly change when you’re going through menus for the TFT screen. Another party trick the Evoque has is the rear-view mirror, which acts a normal mirror but if you flip the little lever attached to it, the mirror turns into a screen displaying video output from the roof mounted camera. The “Clearsight” mirror gives you an unobstructed view of the road behind you, which is pretty cool. Your rear view isn’t obstructed by rear passengers etc., you get a view from the back of the vehicle. The video quality is high, but I would’ve like it to be even higher, 4k would be great, and I did find the camera gets dirty once in a while, obstructing the view significantly.

The interior is quiet and there is a mixture of soft and hard-touch materials. The Evoque is a small CUV, but I found it to have a good amount of leg room for four average sized adults, putting a fifth adult in back seat for longer distance would not be a comfortable experience. Behind the rear seats, there is 612 liters of luggage space, with the rear seats folded down, that space increases to 1,430 liters. The rear seat can be folded 60/40.

The new Evoque is a best seller for Range Rover, and for good reason. It’s a very stylish vehicle, that’s quite fun to drive, it has a nice interior with the latest tech, and on that odd occasion you feel adventurous, it can actually go through some rough terrain thanks to its Land Rover DNA.

Originally published on November 6, 2019 in Uncategorized