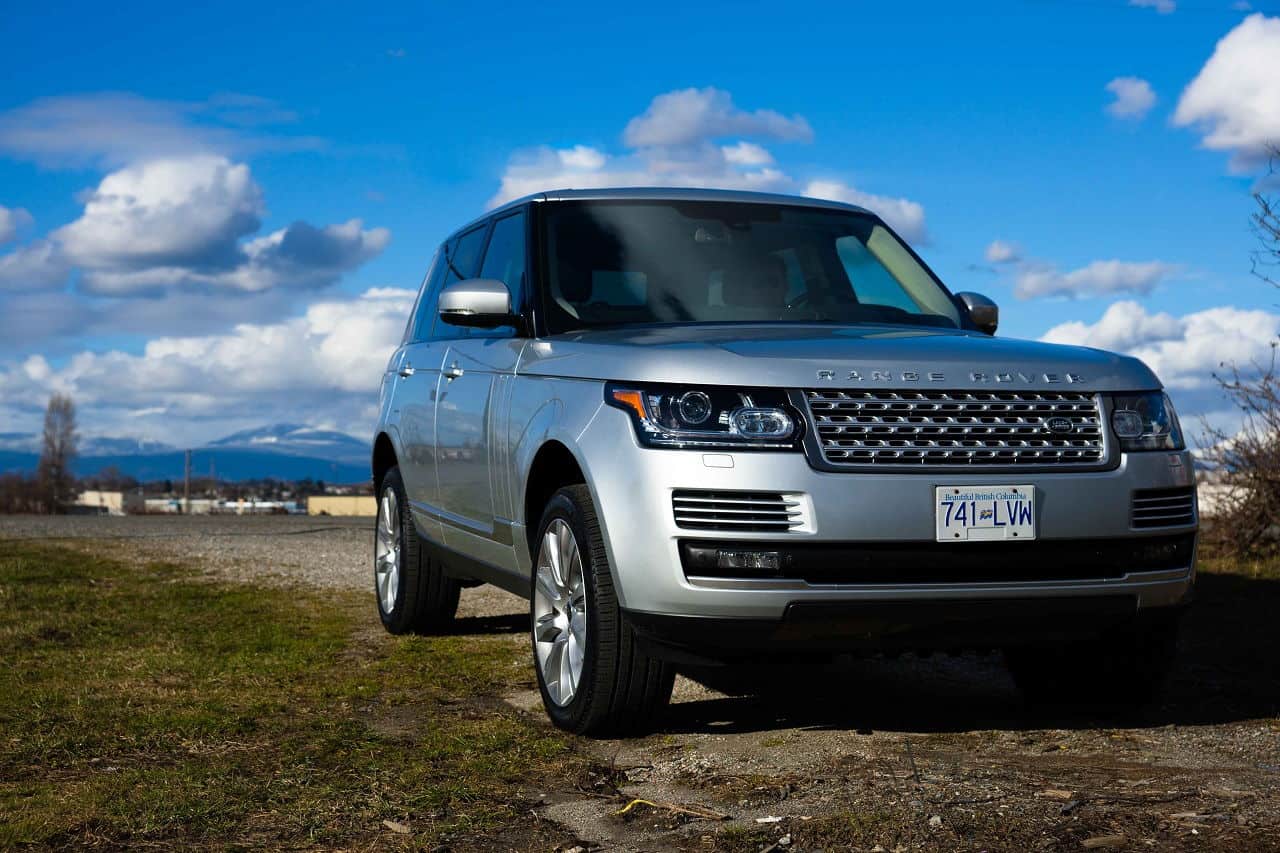 It’s hard to believe that about a decade ago, if a car had over 500 horsepower, you’d consider it a supercar.  Fast forward to 2014, we have SUV’s that produce 500+ HP!  Said SUV is the new 2014 Range Rover Supercharged, and we reviewed it for a week.

The Range Rover, by Land Rover, has been around for a very long time; if you watch any safari-type movies/shows, you’ll definitely see at least one of these tough off-roaders.  This British SUV has been in production since 1970, but the current model is only the 4th generation of this iconic vehicle; have a look at the image below to see how these vehicles have evolved over the years.  The latest generation Range Rover was introduced in 2012 as the 2013 model.

The Range Rover has come a long way over the years, it’s still as tough as it used to be but now it’s a full-blown luxury vehicle.  Gone is the body-on-frame architecture, instead the 4th generation features a uni-body construction with aluminum body panels.  With the redesign, the new Range Rover is up to 700 pounds lighter than its predecessor.

The 2014 Range Rover is offered with two engine choices in the United States, a supercharged V6 and a supercharged V8; in Canada we only get the supercharged V8.  The V6 produces 340 horsepower and 332 pound-feet of torque.  The Range Rover we test drove came with the mighty supercharged V8 engine that produces 510 horsepower at 6,000 rpm and 461 pound-feet of torque at 2,500 rpm, mated to a ZF 8-speed automatic transmission with steering wheel mounted paddle shifters.  The RR does the 0-100 km/h sprint in 5.4 seconds (0-60 mph in 5.1 seconds), with an electronically limited top speed of 250 km/h (155 mph).  Not bad for a big heavy SUV.

The Range Rover has gained its iconic status because of its off-road capabilities.  However, nowadays, most of these vehicles will never stray off the paved path.  But that doesn’t mean it can’t, the 2014 Range Rover is just as capable as ever, and now with even more tech gadgetry to get you out of the stickiest situation. 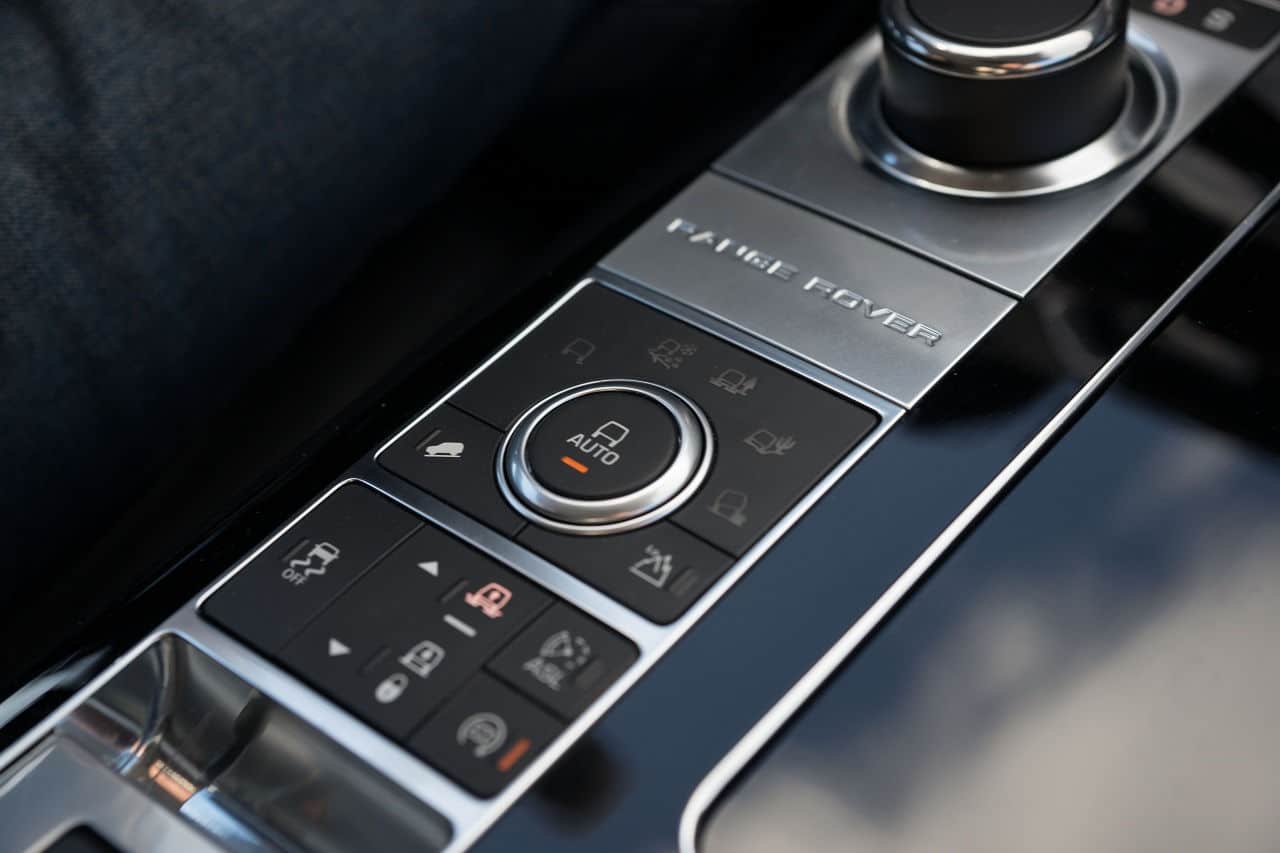 The vehicle is equipped with the Terrain Response 2 system, with a knob placed on the center console to put it into various modes.  With the second generation system, now you can pick “auto” and let the vehicle do all the thinking.  Or you can manually choose between “General”, “Snow” – which includes grass and gravel, “Mud/Ruts”, “Sand” and “Rock Crawl”.  Just leaving the system in auto does a pretty good job, but if/when conditions worsen, it’s better to put it in the appropriate mode.

I made use of the “Snow” mode on a trip to our local ski mountain; we had a pretty decent sized snow storm that weekend.  The roads were covered with 3+ inches of snow and the Range Rover plowed through it with no problems, on summer tires.  On the way back down the mountain, I just put the vehicle in the automatic hill-descent mode and let the computer figure out how much braking and accelerator to apply.  In this mode you can descend at up to around 40 km/h, the traffic ahead was slow, so it worked out really well and the system made the drive down the mountain a breeze. 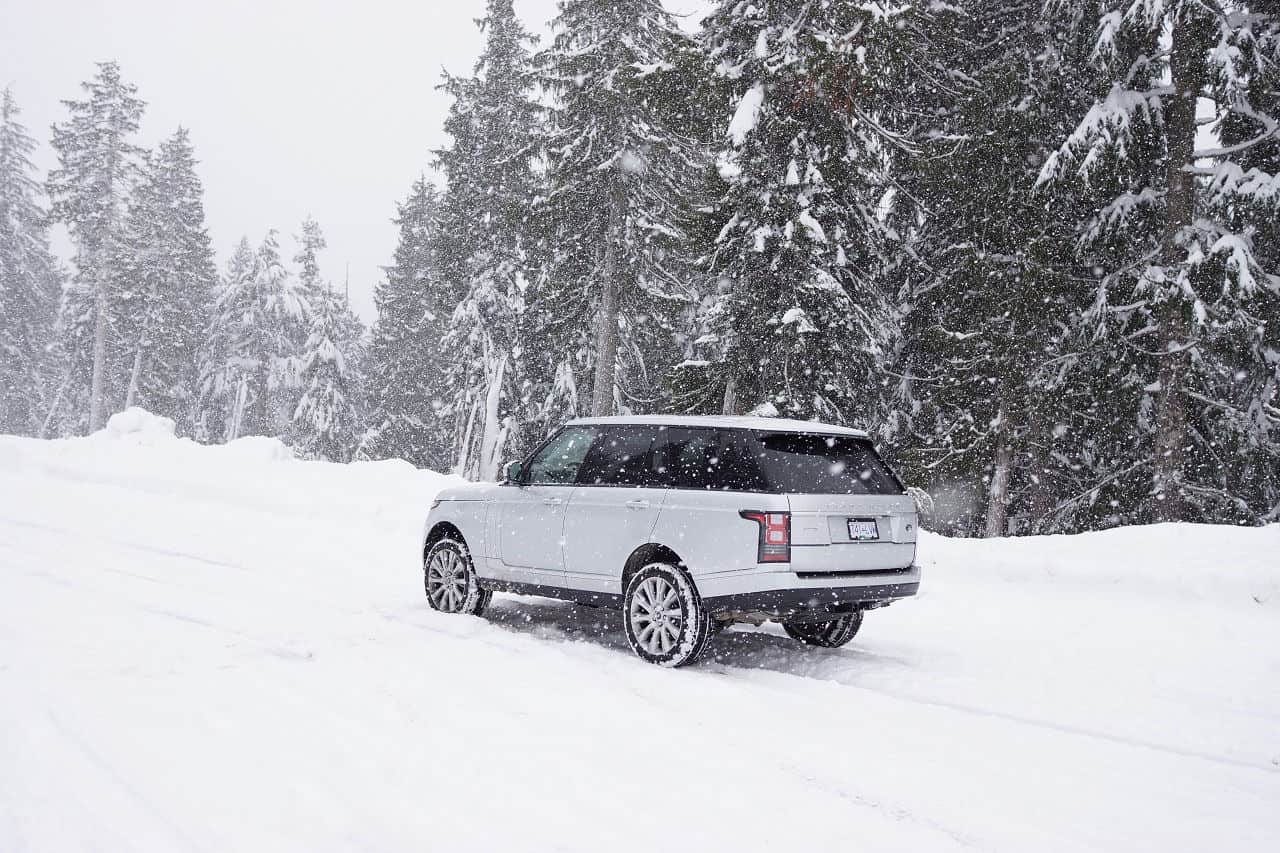 The 2014 Range Rover is also equipped with permanent four-wheel-drive system and high and low ranges for those that want to do some real off-roading.  The air-suspension can raise and lower the vehicle and comes with three settings.  At its highest setting, the vehicle has 11.9” of ground clearance.  The vehicle also comes with a lot of cameras to look around it, especially useful when doing rock crawling or other off-roading; it can be equipped with up to19 cameras.

Like I said earlier, most of these vehicles will explore the urban jungle most of the time, with the capable off-road system being called upon during rough weather conditions, like we experienced.  On city roads, the vehicle is very well behaved, easy to drive, and has a comfortable ride.  I called the Range Rover a jacked-up XJ sedan, obviously the ride quality isn’t as good as the XJ, but it’s very comfortable for an SUV.  The interior is very quiet; you barely hear the supercharged V8 engine and the driving dynamics are closer to a sporty car than a big SUV.  The steering is precise and the 8-speed automatic transmission is very smooth.  The engine is very responsive and in the dynamic mode, the Range Rover really goes; it’s pretty surprising how fast this thing gets up to speed. The power is very addicting and will have you drag racing from one red light to the next.

The styling on the 4th generation Range Rover is distinct; you won’t mistake it for another vehicle.  It still looks like a proper Range Rover, with design elements from the 3rd generation vehicle but modernized.  It’s less boxy with smooth lines and features a more raked windshield; it also borrows design elements from the Evoque.  What I’ve noticed with most modern cars is that they look much better in person than in pictures, and that’s the case here as well.  When I first saw pictures of this vehicle in 2012, I wasn’t sure if I liked it, but seeing it in person, I quite like it.  It has a nice presence on the road but for some odd reason, it looks even better (to me at least) when it’s parked off-road in the dirt and rocks. 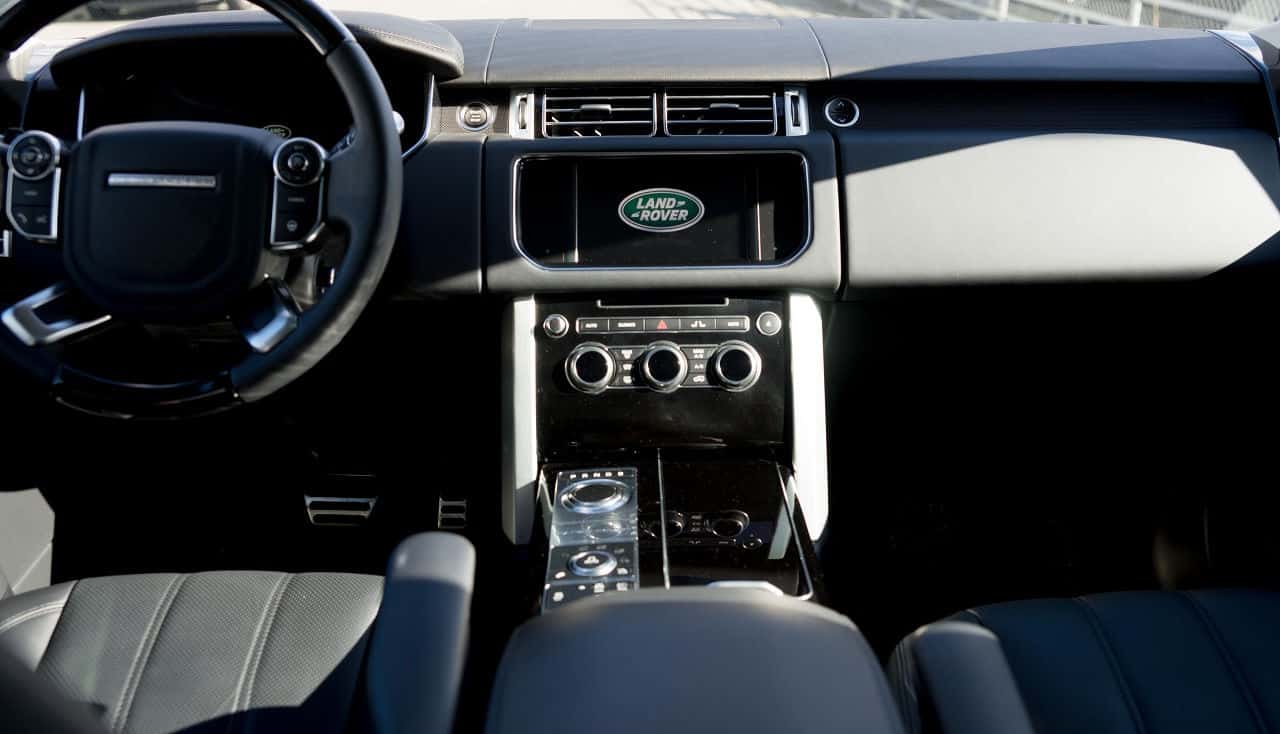 The interior on the Range Rover is very luxurious; it’s bigger than before, quiet, comfortable, and full of tech gadgetry.  The front console area is 50% less cluttered than before (per the designers), with very few buttons.  Most of the functions are controlled via the 8” touchscreen, with buttons for the climate control below it.  The knobs for the climate are the same style as those on the F-Type, which look great.  There is also a 12.3” screen behind the steering wheel that shows the two gauges and other vehicle information.

I like the interior but it doesn’t feel as special as the one found on the XJ luxury sedan, it’s a nice place to be in.  You’re surrounded by soft-touch materials everywhere and the front and rear seats are heated and cooled.  The driver and front passenger seats also get massage with three settings.  My other big complaint about the interior is the touchscreen system; it’s not as responsive as the competition and seems at least one generation too old. 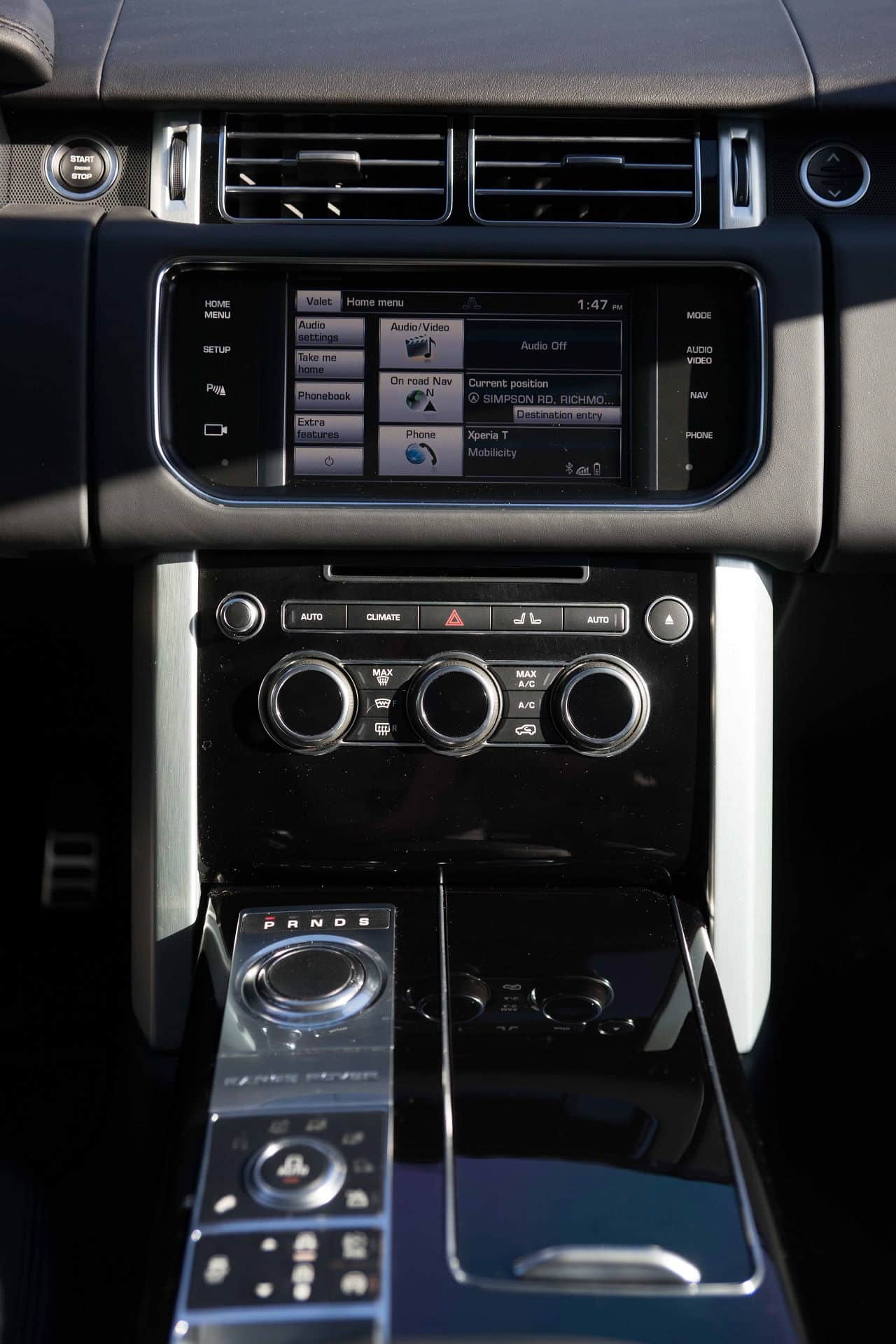 The 2014 Range Rover is full of other technologies and accessories that make life easier.  It comes with automatic Xenon headlights, blind-spot monitoring, front and rear park assist with cross-traffic monitoring, rear camera in addition to front and side cameras, navigation, hands-free phone, Bluetooth connectivity, iPod (or other MP3) player connectivity, a refrigerator, 4-zone automatic control, power seats, and a panoramic sunroof.

To save fuel, the Range Rover Supercharged also comes with stop-start system.  In theory this system is great for fuel savings, but it’s not as smooth as I would expect in a luxury vehicle of this calibre.  If the engineers can make the engine turning on and off more seamless, I would’ve left the system on most of the time (I had the system off almost all of the time).

My overall impressions of the 2014 Range Rover are very positive.  There are not too many vehicles that can get you to 60 mph in 5 seconds, take you off road through some of the toughest terrain, and drive on the road with the comforts of a large luxury sedan.  The engineers and designers at Land Rover have done a great job on producing the 4th generation Range Rover.