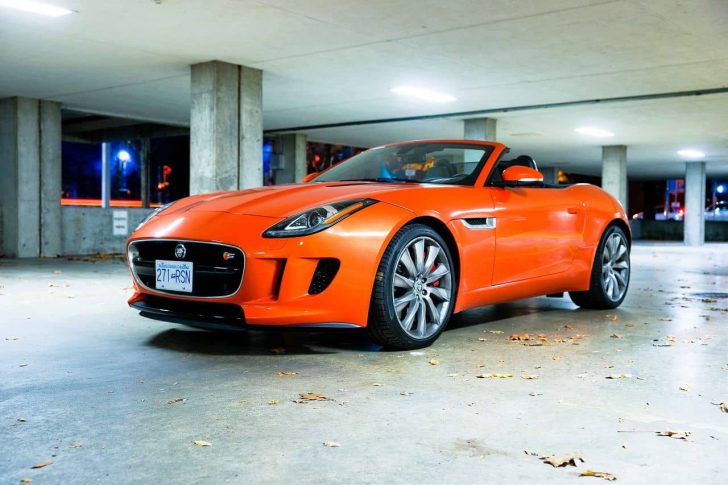 I’ve been waiting all summer for this week, as a matter of fact, I’ve been waiting for this since I first saw the Jaguar F-Type concept way back in September 2011, back then it was called the C-X16 concept.  I was hoping to get the car during a sunny summer week, but having a convertible in a cold month is not as bad as I thought it would be.

So after reviewing the powerful Jaguar XKR coupe for a week, I was presented the opportunity to test drive the 2014 Jaguar F-Type S roadster for another week, it doesn’t get better than that!

The Jaguar F-Type is decades in the making, a true predecessor to the E-Type, a car that has been called the “world’s most beautiful car” by numerous automotive journalists and even Enzo Ferrari said it was the world’s most beautiful car.  So the F-Type has big shoes to fill and all I can say is the wait was definitely worth it.  The F-Type is a gorgeous looking car that drives wonderfully and will leave a grin on your face every time you go for a drive or just look at it parked in your garage or driveway.  My hat goes off to Ian Callum for designing this beautiful car.

Originally when the F-Type was presented, it was in coupe form but Jaguar decided to put the roadster into production first.  I knew, as did every other automotive journalist, that Jag will offer a coupe version of the F-Type and they did in November 2013.  I can’t wait to review that car as well.

For our review, we spent a week test driving (having too much fun with) the 2014 Jaguar F-Type S, which has a starting price of $88,800 in Canada.  Our test car was loaded with $16,200 worth of options including climate package, leather and sports seats, upgraded sound system, 20” wheels, and upgraded brakes.  The total cost of our review F-Type S was $108,025 with fees and PDI, before taxes.

I’ll start with the way the Jaguar F-Type looks, and I must say it looks incredible.  The car is a true predecessor to the E-Type but it doesn’t rely on any retro styling, the design is completely modern.  The design is very clean, with no over-the-top elements; the F-Type is the convertible of a gentleman.  With the top up, the F-Type roadster looks okay, but with it down, that’s when this car really shines.  This car needs to be driven with the top down.

The F-Type features a long hood with a short rear end, like a true British sports car.  The design has been kept very clean, even the door handles are built into the doors, they pop out when the car is unlocked.  At the rear, there is a spoiler that’s integrated into the trunk, it lifts up at speeds of over 60 mph and can also be activated manually with a button on the center console, at speed less than 60 mph.

The front end of the F-Type has a jungle cat look to it; at least that’s how it looks to me.  The headlights come with LED day-time running light strips that are shaped like the letter “J”, and are called “J-blade” lights (pictured on the right).  The rear lights also come with LED strips, the look of which is homage to the E-Type’s rear lights.  Both the front and rear LED lights give the car a distinct look and they look striking.

Driving the F-Type was a totally different experience after spending a week with the more powerful XKR, obviously the F-Type V6 S a lot less power than the XKR, which can be remedied by the V8 S, but it made up for it with the way it handles.  The F-Type is very nimble and so much fun to drive, the car feels very balanced, as it should with its 50/50 weight balance.  The body and chassis is constructed out of aluminum and the engineers even put the battery and fluid for the windshield wipers in the trunk, to get to that 50/50 front/rear weight ratio.  They hydraulic steering is a pleasure to flick left and right, it has a nice amount of weight to it, and it makes the car very fun to drive on curvy roads or just zooming in and out of traffic.

I was completely addicted to the rumble the XKR made; but wow, was I completely blown away by the sound the F-Type S made.  It makes one of the nicest sounds I’ve ever heard a V6 engine make, the sound is very raspy and the exhaust burbles like nothing else I’ve heard.  When you lift your foot off the throttle, the exhaust makes popping noise which gets even more aggressive with downshifts, the sound was so addicting, I rarely used my brakes to slow down, instead I kept downshifting every opportunity I got.  The exhaust note is enhanced by what Jaguar calls “switchable active sports exhaust”, which can be turned on or off with the flick of a switch next to the gear lever.

The body of the Jaguar F-Type roadster is very rigid, I didn’t feel much body roll and the car doesn’t really feel like a convertible.  The car drives comfortably in the normal mode but if you want to feel sporty put it in the “dynamic” mode and things change dramatically.  The throttle response is quicker, the gears shift even quicker, and the suspension firms up.  In the dynamic mode, you can adjust the settings for individual items such as suspension, engine response, gear shifts, and steering response (pictured on the left).  This feature came in handy when I was driving in the dynamic mode on some very bumpy roads, I switched the suspension to normal setting and the car rode much smoother with the rest of the features still in the dynamic mode.

Before I drove the F-Type, I had complained about the lack of a manual transmission, I’m old school and prefer to change gears myself.  I know I’m going to get hate mail for this, but the 8-speed ZF automatic transmission worked so seamlessly that I totally forgot about the lack of a manual; using the paddle shifters felt so natural and I usually don’t even bother using the paddle shifters on most cars I review.

The interior on the 2014 Jaguar F-Type S is just as nice, if not nicer than the exterior.  Everything is covered in soft-touch material and miles of beautiful leather with body-color matching stitches is applied to the seats, dashboard, door panels, and center console.  Unlike the XKR, the F-Type’s interior is very modern and driver-centric; it looks to be inspired by a fighter jet.  Everything is well laid out with some very cool touches like the climate control temperature being displayed on a small LED (or LCD?) screen integrated into the temperature knob.  Press and twist the same knob to adjust the temperature on the heated and cooled seats.

Another cool feature on the interior is the hidden HVAC center vents on the dashboard, when the climate is turned on, the vents magically rise above the 8” LCD screen to blow hot or cold air onto the occupants.

With the roof down, there isn’t much wind turbulence in the cabin; I drove the car around with the roof down in the freezing cold weather, it felt quite comfortable with the heated seats and steering wheel and the heater blasting at full.  With the roof up, the interior is pretty quiet and very well insulated; it definitely didn’t feel like a convertible.

The F-Type is loaded with modern tech that’s found in other Jaguar cars, but the execution here is much better.  The large touchscreen, for example, has a much quicker response time than all the other Jaguars I’ve test driven and the navigation screen has the cleanest looking maps I’ve ever seen in a car.  Hopefully Jaguar is able to update the software in all their other cars soon.

The F-Type S also comes with stop/go engine technology; the engine shuts off at a stop to save fuel.  The same system is also found in the Jaguar XJ, but in that car, I found it a bit rough, however, Jaguar engineers seem to have made it smoother on the F-Type, the system felt a lot more seamless compared to the XJ sedan.  This system can be manually shut off in normal mode and automatically shuts off when you’re driving in the dynamic mode, which is how I drove it 90% of the time.

I was very satisfied with the performance and looks of the 2014 Jaguar F-Type S roadster; I think it has a stunning design, a beautiful and comfortable interior, and it’s a lot of fun to drive.  The car is quite a head turner and will definitely differentiate you at golf club parking lots full of Porsches and BMWs.  Would I buy the F-Type roadster? That decision will have to wait until I get to test drive the F-Type coupe and then decide if I want to go topless or not.

For more information on the 2014 Jaguar F-Type Roadster and the options you can load it up with, check out Jaguar’s official website.