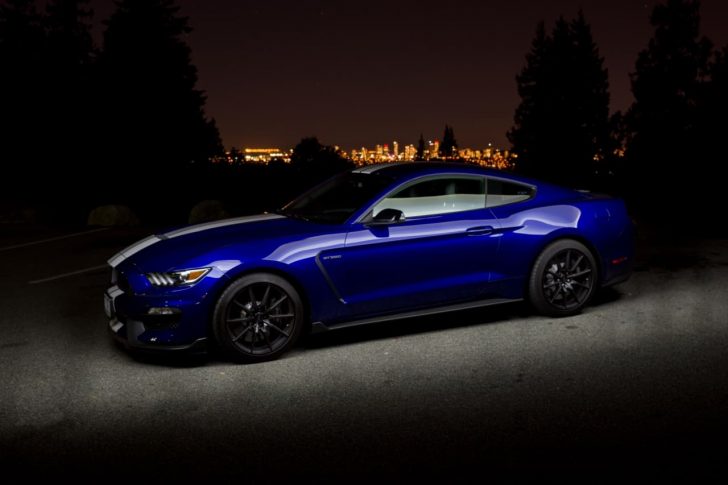 Most of my friends consider me very lucky because I bring a new car home almost every week. They think I have one of the best jobs in the world, which I do, but after a while reviewing cars becomes just like any other job, because you have to review cars that are not necessarily exciting to drive or even look at. But then there are weeks when you can’t wipe the smile off your face because you’re driving something very special.

Last week was such a week, when I was given the opportunity to bring home a shinny 2016 Ford Mustang Shelby GT350 sports car! I’ve reviewed the regular versions of the 6th generation Mustang (GT and EcoBoost) over the last year, but the GT350 is something very different, “it’s a weapon” as Chris Harris would say. 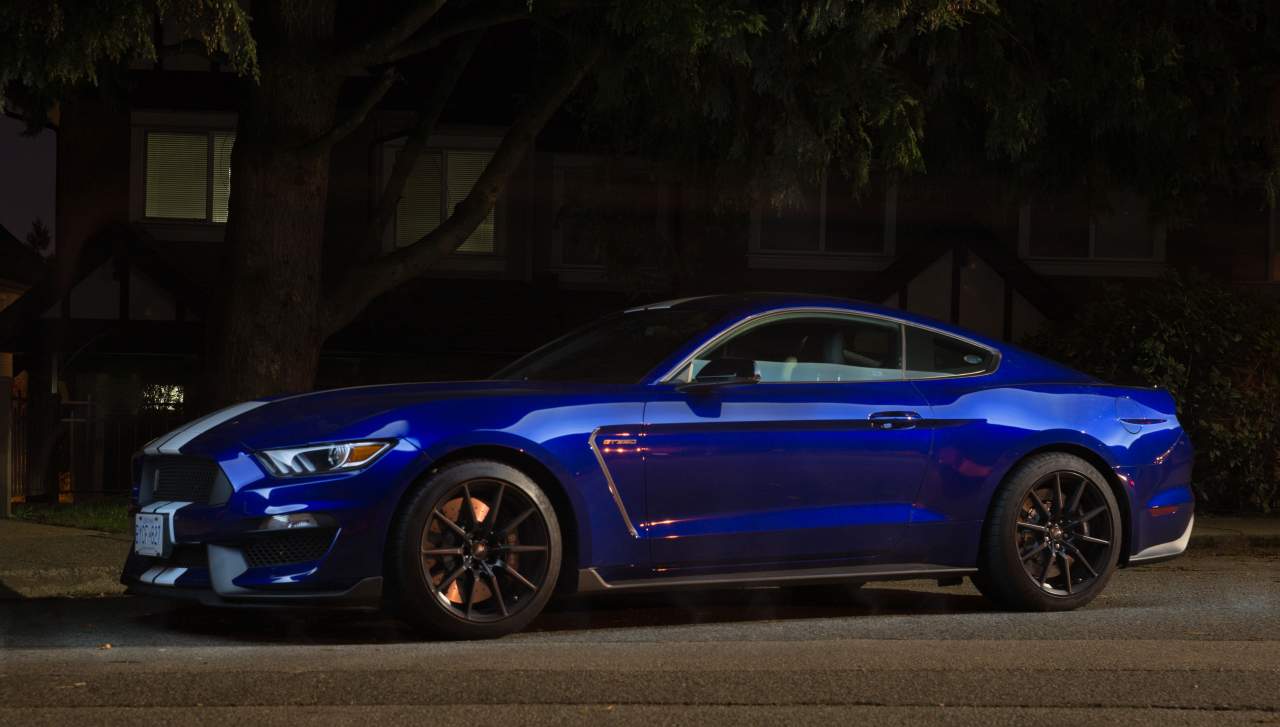 Ford has been doing an impressive job of producing vehicles for the performance-minded car buyers, while most of the other manufacturers are busy making more and more cross-overs and SUVs; Ford has brought to market quite a few very sporty affordable cars that the average consumer can buy without taking out a second mortgage. In addition to the regular Mustang, you can buy the Shelby GT350 and GT350R, Focus ST and Focus RS, Fiesta ST, and of course their supercar, the Ford GT. The Ford GT is going to very expensive, but I can’t complain about Ford’s sporty offerings, there are plenty to choose from from the vehicles mentioned above.

If you’re car fanatic, like myself, and haven’t been living in a cave for the past year or so, then you’ve definitely heard of the new Shelby GT350, and you’ve probably read and watched numerous videos of this car. The consensus so far has been “thumps up”, and I’m not here to change your mind, I was expecting a lot from this car and I was not disappointed the moment I pushed the “start” button, but more on that later, let’s talk some numbers. 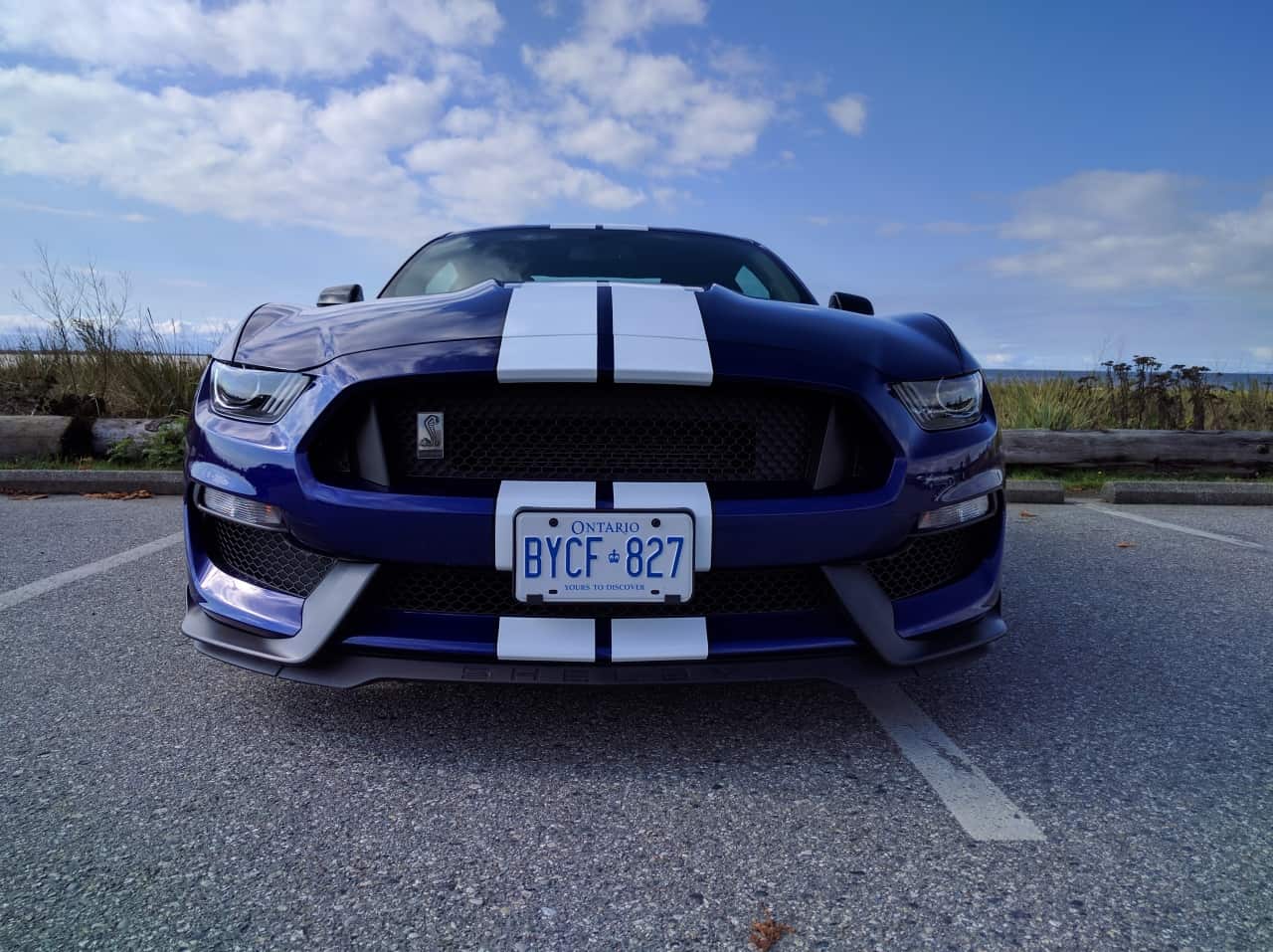 In Canada, the 2016 Ford Mustang Shelby GT350 has a starting price of $62,599, if you’re looking on Ford’s website and can’t find that figure, that’s because for 2017 prices have changed with different packages now being offered. Our review car came with the Technology package ($9,400), which includes power heated/cooled sports seats (this deletes the manually adjusted Recaro seats), dual zone climate control, and voice activated navigation system with SYNC 3. For 2017 this package is replaced by either the Convenience or Electronics packages. With the Electronics package, you get all of the stuff from the Tech package, but you get to keep the Recaro seats. And if you want power seats, then the Convenience package is the equivalent of the 2016 car’s Tech package.

Unlike some of the previous special versions of the Mustang, the 2016 GT350 is powered by a naturally aspirated engine. The engine is a 5.2 liter flat-plane crank V8, producing 526 horsepower at 7,500 rpm and 429 pound-feet of torque at 4,750 rpm. The only transmission offered is a 6-speed manual, which sends power to the rear wheels. The V8 engine revs all the way to a red line of 8,200 rpm!!

The big news with the GT350 is the very high revving flat-plane crank V8 engine, I won’t bore you with what this engine type is and how it works, if you’re interested in learning more about this type of engine, watch this video and head on over to Wikipedia. The 5.2 liter engine is also the most powerful naturally aspirated engine Ford has ever put in a production vehicle.

As you’d expect from a car with 500+ horsepower, the GT350 is properly fast, with a 0 – 60 mph time of 4.3 seconds. But the GT350 is not just about going fast in a straight line, the car can actually turn and do it without losing its cool. The GT350 is very stable in corners and can keep up with and even beat a lot of European cars. Thanks to its magnetic suspension, the car stays flat in corners and is comfortable enough around town that it won’t loosen your cavities like some of the hardcore sports cars.

The GT350 is also not as hard to drive as the performance numbers would suggest, in the dry. In wet conditions, you do have to be gentle with the throttle because all those ponies are directed at the aggressive Michelin Pilot Super Sport rear 305/35 ZR19 tires (fronts are 295/35 ZR19). The GT350 also comes with “Weather” mode, which does help with controlling the back end in tricky conditions.

Driving in “Normal” mode, the GT350 drives and feels like a normal sports car, it’s not too loud and easy to handle. Put it in “Sport” mode and the car becomes much more aggressive and the exhaust sounds like a volcano arguing with itself. The exhaust is very loud and fun to listen to, revving the V8 engine became quite addictive and every time I entered a tunnel or an underpass, I made sure to roll the windows down, downshift, and give it some juice.

Driving around town is quite easy in the GT350, the V8 produces a lot of torque, so you don’t really need to constantly downshift. But when you do decide to downshift, the car takes off like a rocket. Shifting gears through the 6-speed manual transmission is smooth and the clutch is very soft and won’t strain your leg. The ride quality is surprisingly comfortable, I was able to drive for many hours and didn’t feel much fatigue. The magnetic suspension soaks up bumps very nicely and the car feels very stable. In fact, it feels so stable that you feel like you’re going a lot slower than you actually are when driving around town. All the down force, the suspension, and the weight of the car makes the GT350 feel glued to the road. 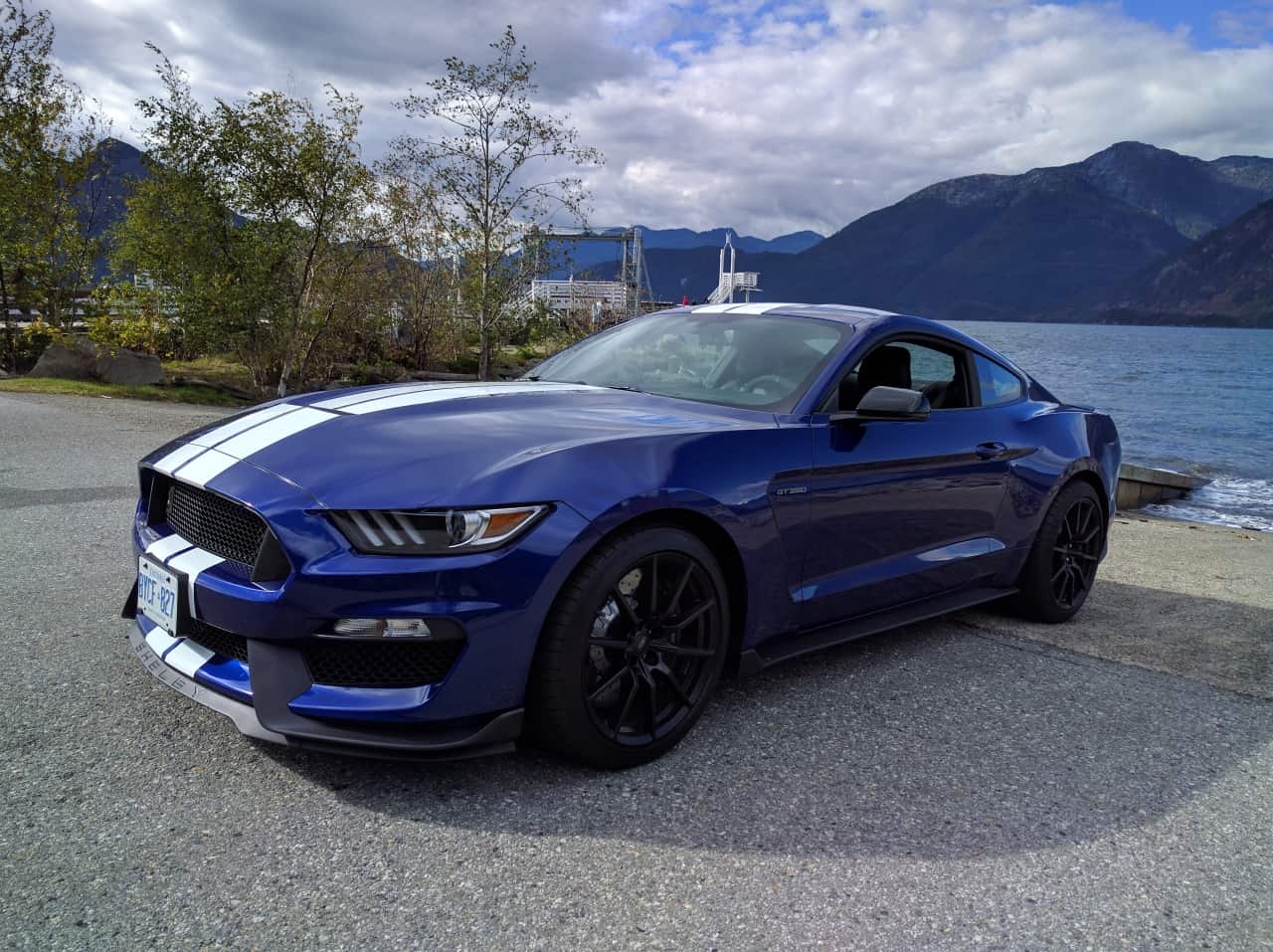 When the 6th generation Mustang was introduced a few years back, I wasn’t really sure if I liked its styling based on the press release pictures. But when I spent time reviewing the Mustang GT, I started to like its design. The GT350, on the other hand, I was a fan of from the first time I saw photos of it. The GT350 sits lower, is wider, and has a new fascia compared to the standard Mustang. The front is very aggressive and low, it looks very fast even when it’s going slow. I also noticed drivers moving out of the passing lane very quickly as I approached them from behind to pass the, this is something very rare in the Vancouver area, drivers here love to hog the passing lanes.

The GT350 is completely different from the Mustang GT from the A-pillar forward, with aluminum fenders that are wider and feature vents for air flow from the wheel wells and to cool the front brakes. The hood is also lower and features extra curves and a functional air vent that releases hot air from the engine and also provides additional down force at higher speeds to keep the front end planted to the road. On the side, the GT350 features new side skirts with aero bits and comes with a rear diffuser and quad exhaust tips. 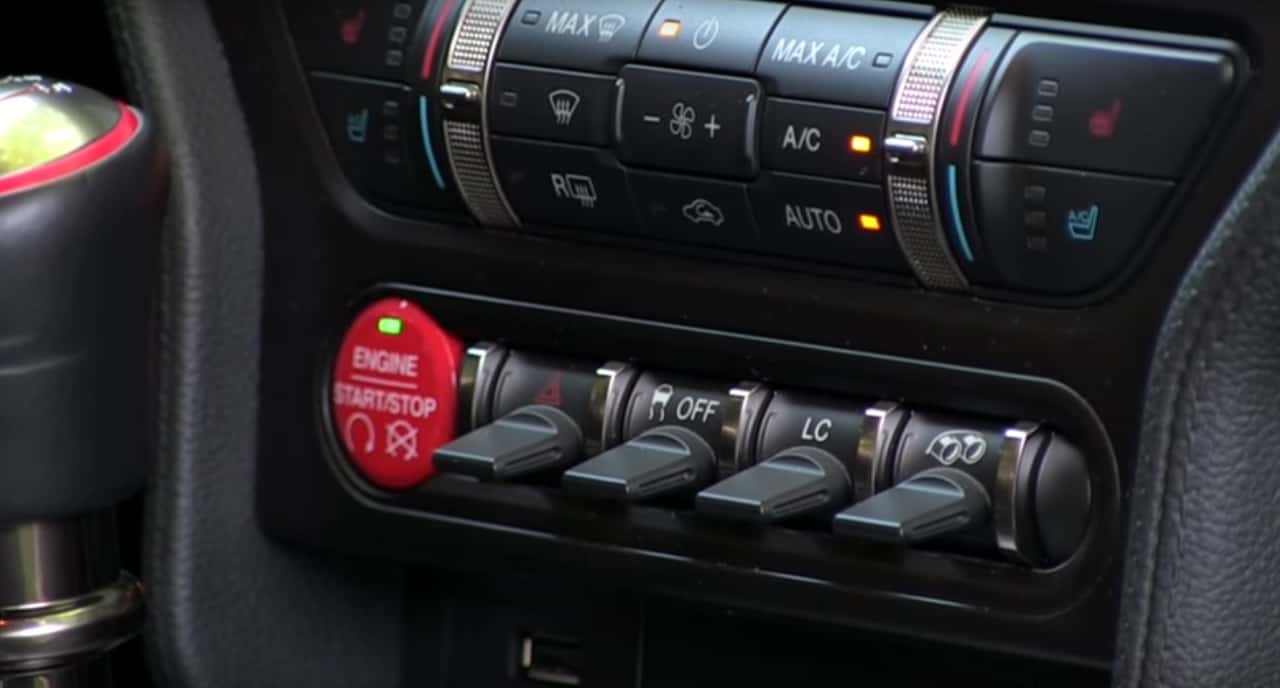 The interior is basically the same as the rest of the Mustang lineup. The toggle switches at the bottom of the center stack on the GT350 are now used for changing the exhaust sound, launch control, hazard lights, and turning off the traction control. The steering wheel also houses buttons to change the driving modes between “Normal”, “Sport”, “Weather”, and “Track”. You can also change the suspension and steering feel individually by pressing the two buttons on the steering wheel, next to the driving mode selector.

Our review car had the Technology package, which removes the Recaro seats and adds power adjustable sports seats with leather and Alcantara. I personally always prefer Recaro seats in sports cars, but the sports seats on our review GT350 were also very supportive and very comfortable, the seats provided lots of back support and held me in place quite nicely in high speed corners.

I had a great time reviewing the Mustang GT350, I’ve been waiting eagerly to get my hands on it for months. I did get the car towards the end of the year, but I was lucky to get a few sunny days to really enjoy the car and see how it performs in the dry. The sound and the power of the V8 are very addictive and you just want to drive this car for hours. It’s also very fun just starting the engine and listening to the roar of the V8.

For the price, I don’t think you can find any car that has this much performance. It’s also a good looking car and is pretty rare, which are qualities I look for in a car. I’m very tempted to put one of these in my garage, maybe within the next year or two. For more information on the GT350 and other sporty offerings by Ford, visit ford.ca.

Originally published on October 19, 2016 in Cars