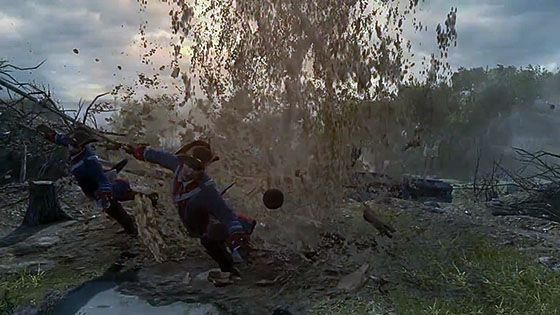 As the November 30th release date for Assassin’s Creed 3 draws ever nearer, Ubisoft continues to bring us trailer after trailer, and screenshot after screenshot. They’ve got a great reason to do so, as AC3 looks fantastic. Generally the trailers have a very action oriented stilt to them, but with this latest offering, it seems they’ve taken a slightly different direction.

As you’ll see in just a moment, the pacing of this video is much slower than Ubisoft’s usual sword swinging, slow motion, dubstep filled offerings. Instead, we’re shown a more somber representation of the game, featuring a young, undoubtedly annoying child singing Amazing Grace.

Oddly enough, I couldn’t help but be reminded of the A Part of Our Heritage videos that the Canadian Government used to play over and over again on daytime television. I must have watched each of them thousands of times as a child, and if you’re lucky enough to be one of our Canadian readers, I’m betting you remember them too. This isn’t necessarily a bad thing, and I would actually go so far as to say that the slightly down-tempo ambiance they used this time around was actually kind of refreshing.

What’s even more surprising than the tone is that we actually see one of the Red Coats kill a colonist! I know it’s not the same as Connor actually doing this, but it leads me to believe that maybe… just maybe, Ubisoft will actually have the stones to allow players agency in where they place their allegiance. I have a feeling I’m going to be sorely disappointed in that respect, but I’ll wait to try the game before throwing a nerd tantrum.

The Assassin’s Creed 3 release date is November 30th, 2012 for Xbox360 and PS3, with the PC version arriving sometime in the next few centuries.