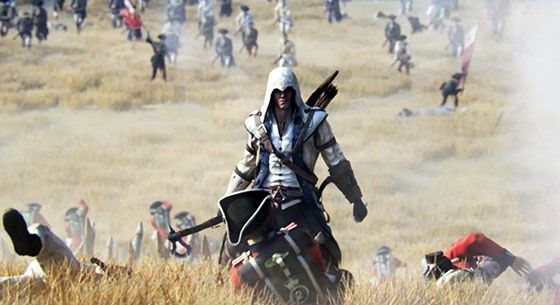 In the game world, it takes a lot to get me excited these days. Just yesterday, as the E3 2012 videos started rolling out, I was telling myself just how jaded I must be to not find any of them particularly exciting. Well, that feeling started to change with the release of many great new videos and screenshots, including the Assassin’s Creed 3 Official E3 trailer.

You’ll all undoubtedly heard of the AC franchise, and have probably even seen our previous coverage of the game, so I’ll spare you the prologue. What I will say, though, is that this new trailer is absolutely fantastic, in a “we know this is The Patriot the game, and we don’t care” sort of way. If you’ve seen Roland Emmerich’s 2000 film The Patriot, you’ll see exactly what I’m talking about in just a moment here.

Assassin’s Creed 3 – The Patriot, The Game

I’ll be honest with you, I was sick to death of the series by the time Assassin’s Creed: Revelations hit stores shelves. I picked up a copy and made it maybe 1/4 of the way through before putting down my copy out of absolute boredom. It wasn’t so much that the game wasn’t interesting (though it wasn’t), but mostly that it was just more of the same.

AC3 appears to be a fairly large departure from the previous games with AC3, and that excites me. Sure, it’s got the incredible looking sword play and Parkour we all know and love, and yes – they look better than ever, especially the animations – but the game also has a very different tone to it. The inclusion of a wild, outdoor element goes a long way towards making the game feel new and fresh. I’m really looking forward to giving this one a try, and my only hope/critique is that we’re given an opportunity to fight against more than just the British. Giving us only that one option would be the easy way out, and I know that Ubisoft can do better than that.