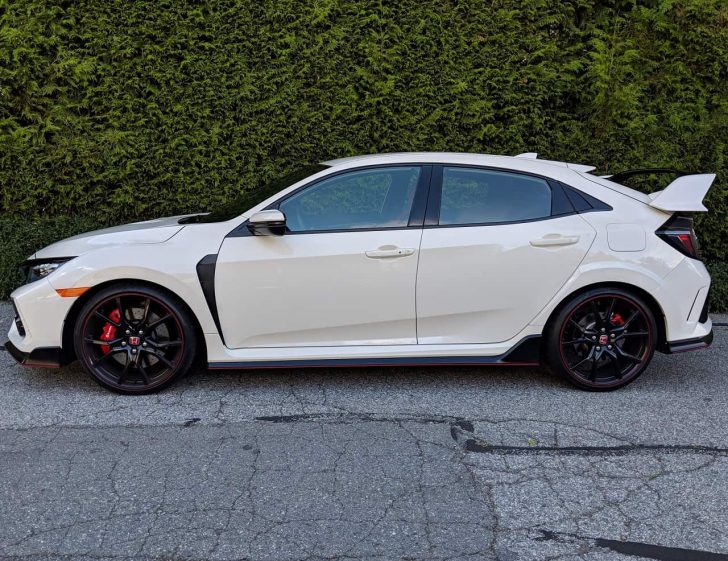 Beautiful On The Inside: 2018 Honda Civic Type-R Review

North American fans of “hot hatches” have been lusting over the Honda Civic Type R since it was first introduced in 1997, it took Honda 20 years to finally let us North Americans have a shot at the very popular and capable Honda Civic Type R. The Type R has been available in Canada and the United States since 2017 and we finally had a chance to spend a week reviewing it.

In Canada, the 2018 Honda Civic Type R has a starting price of $42,870, price includes Freight & PDI of $1,780. There is only one option, an $861.16 Illumination Package, which adds some accent lighting. The Civic Type R is offered in three colors: Black, White, and Red; other colors are offered in different markets. Our review car came in white. 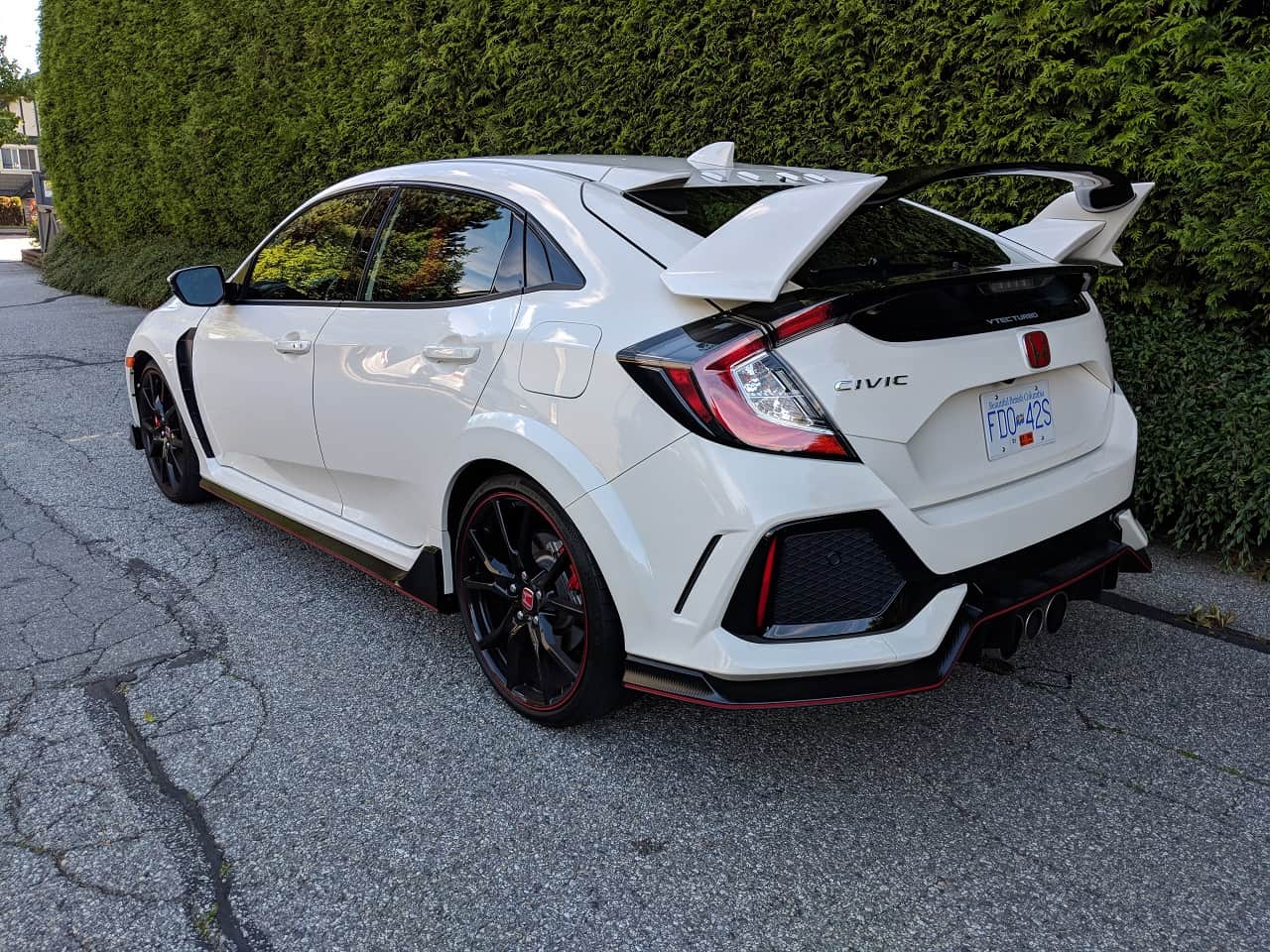 My mom always said you shouldn’t judge someone on their looks, and it’s what’s on the inside that matters, more on the “inside” of the Civic Type R in the section below.

One of the most controversial element of the Civic Type R is the styling. I understand looks are subjective but most people I talked to about the Type R’s styling, thought it was over the top. I wouldn’t mind the styling too much, if most of it was functional, but a lot of it is to give it some sort of racer look (I guess).

We’ll start at the front, where you’ll find giant “air intakes” but they aren’t really intakes, the front bumper houses two giant cheese graters that don’t do anything and give the car a fake aggressive look. There’s a front splitter, which is fine, but it’s made from fake carbon fiber, this fake carbon fiber can be found throughout the car. Again, make it real carbon fiber or use plastic, no need to fake this stuff. The same fake carbon fiber is found on the side skirts and at the rear diffuser. At the rear is another pair of big cheese graters. The Civic Type R features triple exhaust tips, I’m not a mechanic or an engineer, so I’m not sure if the three exhaust tips are needed, they also look a bit over the top.

The biggest talking point is the giant spoiler at the back, which is actually functional, Honda needed all the downforce to set a track record for a production front-wheel drive car at the famed German racing track, Nürburgring. It also looks over the top to me, but then again, I’m not a young man anymore. I think the looks of the Civic Type R would appeal more to my 20-year old self, but then again, my 20-year old self couldn’t even dream of buying a car that costs close to $50,000 (with taxes).

Personally, I would’ve liked the styling of the Civic Si on the Type R, which is sporty looking but not over the top. 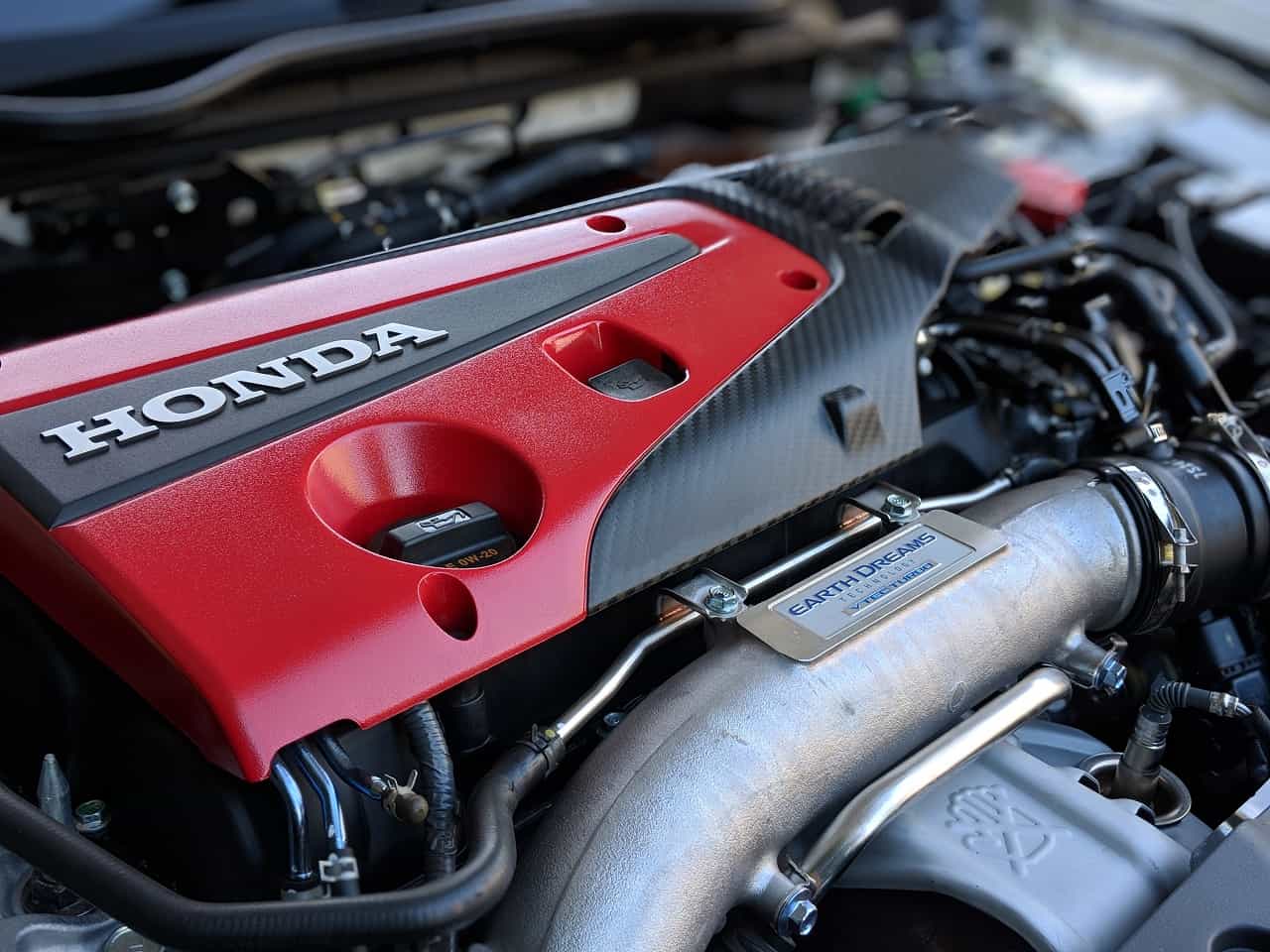 As I said above, it’s the inside that matters and the Civic Type R does have a very beautiful “inside”. The beautiful inside consists a turbocharged 2.0 liter 4-cylinder engine with direct injection, producing 306 horsepower at 6,500 rpm and 295 pound-feet of torque between 2,500 – 4,500 rpm. Power is sent to the front wheels via a 6-speed manual transmission with rev-matching. Sorry, no automatic transmission is offered, this is a true enthusiast car after all. To keep the car pointed in the right direction, it comes with a Helical limited slip differential.

Judging by my rant on the outer looks of the Civic Type R, you probably think I hated it. On the contrary, I loved every minute of my week with the Civic Type R (when I was inside the car and not looking at it from the outside).

The Type R is an amazing driving machine, the little 2-liter engine is one sweet piece of engineering. It produces so much power, giving you smiles every time you get behind the wheel. The engine has lots of low-end torque, thanks to the turbochargers, and a lot of horsepower at the top end. The Type R is easy to drive as a daily driver, just put in the “Comfort” mode, which makes the engine a little tamer, the steering a little lighter, and the suspension soft. Want to have more fun, put it in “Sport” mode and the car changes personality and you’re on your way with a stiffer ride, more throttle response, and a nice and heavy steering feel. Put it in “R” and wow, this car becomes a totally different animal. The steering feels so heavy (in a good way), the suspension is in it’s firmest position, and the throttle response is amazing. 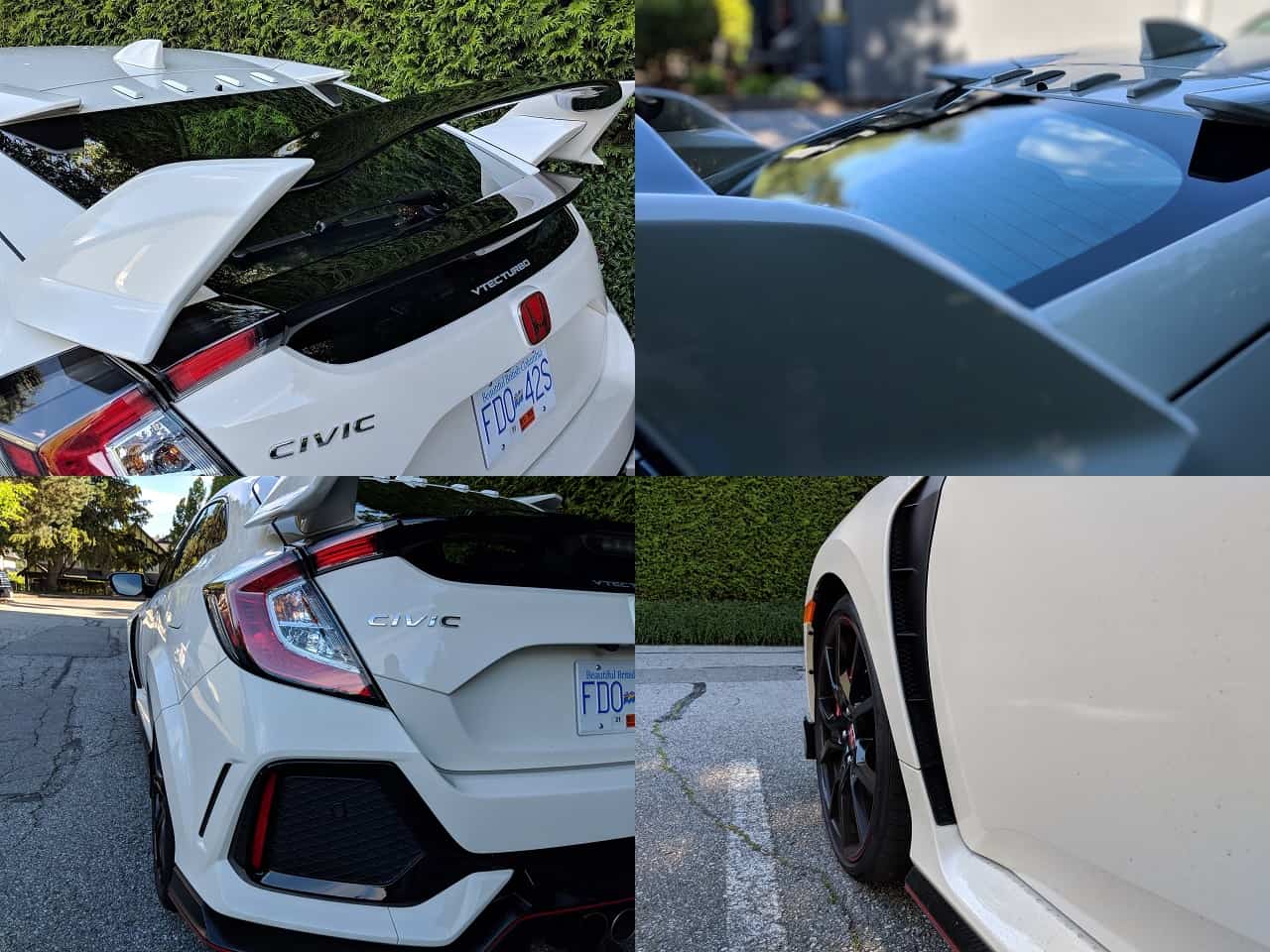 I had a lot of fun in the Civic Type R, the heavy steering feel with all the available grip, makes you feel like you’re driving a race car, which the Type R kind of is. The steering feel was my favorite part of the car, the steering is so quick and precise, just a little flick on it and you’re already changing lanes, and it feels amazing on twisty roads. The amount of mechanical grip and the grip provided by the sticky tires is out of this world, the Type R makes you want to go on the most twisty roads and makes you want to go as fast as you dare. The grip and the way the power is delivered makes you forget you’re driving a front wheel drive car, and that’s not even taking into consideration how much power is being sent to the front wheels. I barely noticed any torque steer, which is an amazing feat accomplished by Honda Engineers.

The transmission is another great part of this car, the throws are short and precise, and they have a very mechanical “thump” to them, the 6-speed transmission also comes with rev-matching, making you feel like a hero (I personally don’t need it, but for those that do need it, it’s a nice little feature). The clutch is light and smooth. The brakes are also very powerful, which they need to be, with the front Brembo 4-piston calipers giving you lots of braking power.

The overall interior on the Civic Type R is the same as on a regular Civic, the exception is a pair of very excellent red Recaro bucket seats, which do a great job of holding you in place in high G situations. The Recaro seats are comfortable and supportive, they also give the car a very sporty look. Other minor changes include red accents throughout the cabin, red stitching, and some more fake carbon fiber trim.

The interior is fairly quiet, it does get noisy at highway speeds, most of that noise comes from the aggressive tires. The interior is also roomy and practical, just like the regular Civic hatchback. I was expecting visibility to be affected by the huge rear spoiler, but the spoiler is so tall that it actually aligns with the roof of the car, so you don’t see it at all in the rear view mirror.

As far as tech features go, the Type R has the same features found on a loaded regular Civic. There are a few extra display options on the TFT screen in the gauge cluster, which includes turbo boost, G-meter, lap timer etc.

If you can get over the looks of the Civic Type R, which I started to after spending a week with the car, then it’s great sporty and practical car. But would I personally buy it just judging it by the looks, I’m not 100% sure.

On the other hand, based on the performance, this is a winner. I loved every moment of driving around in the Type R, even in city driving, it was fun and when taken to some twisty roads, I enjoyed it a lot. The car has a lot to offer and it’s incredible how much power a small 2-liter engine can put to the front wheels and still be drivable. If I can convince myself that it’s not too aggressive looking, the Type R would definitely be on my shopping list of a sporty car.

For more information on the 2018 Honda Civic Type R and other Honda products, visit honda.ca.