“They won’t miss you coming in that”, “We could see you coming from a mile away”, and “They can see you from space”…. although I don’t know who “they” are, but these were some the comments I got last week when I was reviewing the bright green “Energy Green Pearl” 2016 Honda Civic Coupe Touring.

The green is a beautiful color and is definitely going to get you noticed, and you might even get a few thumbs up… and some people might even give you “the look”, but we won’t focus on those.

We’ve already reviewed the all-new 10th generation sedans this year, both in the turbo and naturally aspirated guises, check those articles for detailed information on the available equipment and options. Last week we were given the keys to the new 2016 Honda Civic Coupe, in the top of the line “Touring” trim. The 2016 Civic Coupe is offered in three trims, with two featuring “Honda Sensing” suite of technology, making for a total of 5 trims. There are two engine and transmission choice. Below are prices for all the trims. 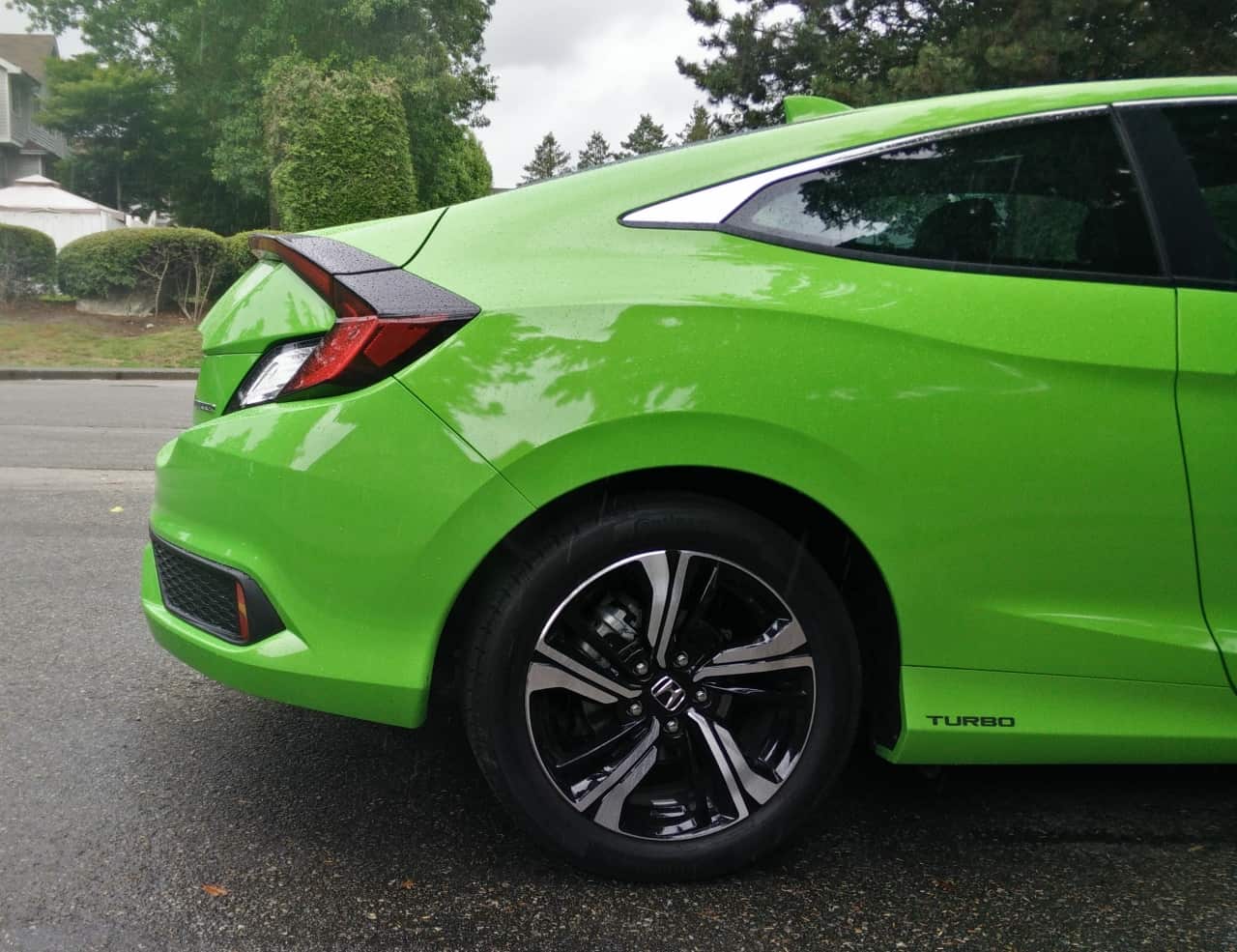 The two engines offered on the Civic Coupe are the same engines found on the sedan. A 2.0 liter naturally aspirated 4-cylinder engine, producing 158 horsepower and 138 pound-feet of torque. This engine is available on the LX trim and can be paired with a 6-speed manual or a Continuously Variable Transmission. The other engine is the 1.5 liter turbocharged 4-cylinder, producing 174 horsepower and 162 pound-feet of torque. The EX-T and Touring trims are equipped with this engine and the CVT is currently the only transmission offered, there is talk of the manual being offered with this engine at a later date.

According to Honda, the 1.5 liter turbocharged 4-cylinder with the CVT transmission should consume 7.5/5.6/6.7 liters/100 kilometers in city/highway/combined driving. I averaged 8.7 L/100 km in pure city driving with the a/c on, and 6.2 L/100 km on 50/50 highway/city driving. These numbers are provided by the car’s on board computer. If you’ve read my previous two reviews (if you haven’t, now might be a good time to do it), you’ll see how impressed I have been with the new Civic. And I’m not the only one, the Civic sedan has won numerous awards, such as North American Car of the Year and Canadian Car of the Year, to name just a couple.

The Civic Coupe is no different, it takes the same great recipe of the sedan and gives it an even sportier twist. Take out two doors, tune the suspension, and lower and aggressively rake the roof line. The end result is a very sporty looking car that’s also quite fun to drive and is pretty practical.

The Civic sedan is already a pretty sporty car, with the coupe’s uniquely tuned suspension, stickier tires, and lighter wheels, it makes for a fun ride. The Civic Coupe is a sports coupe rather than a full on sports car, but that means it’s more practical and comfortable for daily driving. The styling on the Civic Coupe is similar to the sedan, at least at the front of the car, which is very handsome. Obviously the design changes when you make a coupe version of a sedan. There some nice lines in the bodywork, giving the coupe some character. The Civic Coupe looks very sporty and I like the overall look of it. The Coupe’s roof is 1” lower than the sedan, the overall length is 5” shorter, and the wheelbase is actually 1” longer than the sedan. The interior on the Coupe is the same as the sedan, which is quite a pleasant and easy to use design. The interior is very comfortable and quiet. There is plenty of room for the front passengers, the rear seat is not bad. It is easy to get in and out of the rear seat and there was enough legroom for me to be comfortable, however, due to the steep rake in the roof, headroom is very tight. My hair was touching the headliner, I’m 5′ 8” tall with about 1” spike in my hair. Because of the lack of headroom, I wouldn’t want to spend much time in the back seat. My other small complaint was the ability to grab the seat belt for the front two occupants, the belt is a bit hard to grab, Honda should put a seat belt holder on the seats, so you don’t have to twist your shoulder to reach back to grab the belt before fastening it.

Technology-wise, the Coupe and Sedans are identical in what’s available, have a look at my review of the Civic Turbo for a complete listing.

Overall, I think the 2016 Honda Civic Coupe is a pretty good sporty car, just like its bigger brother. It’s pretty fun to drive, powerful enough, fuel efficient, affordable, and can be equipped with a lot of different tech features. It is also one of a very small handful of FWD coupes currently available in the marketplace. For more information, check out honda.ca.

Make Money During Fun Time, To Have More Time for Fun