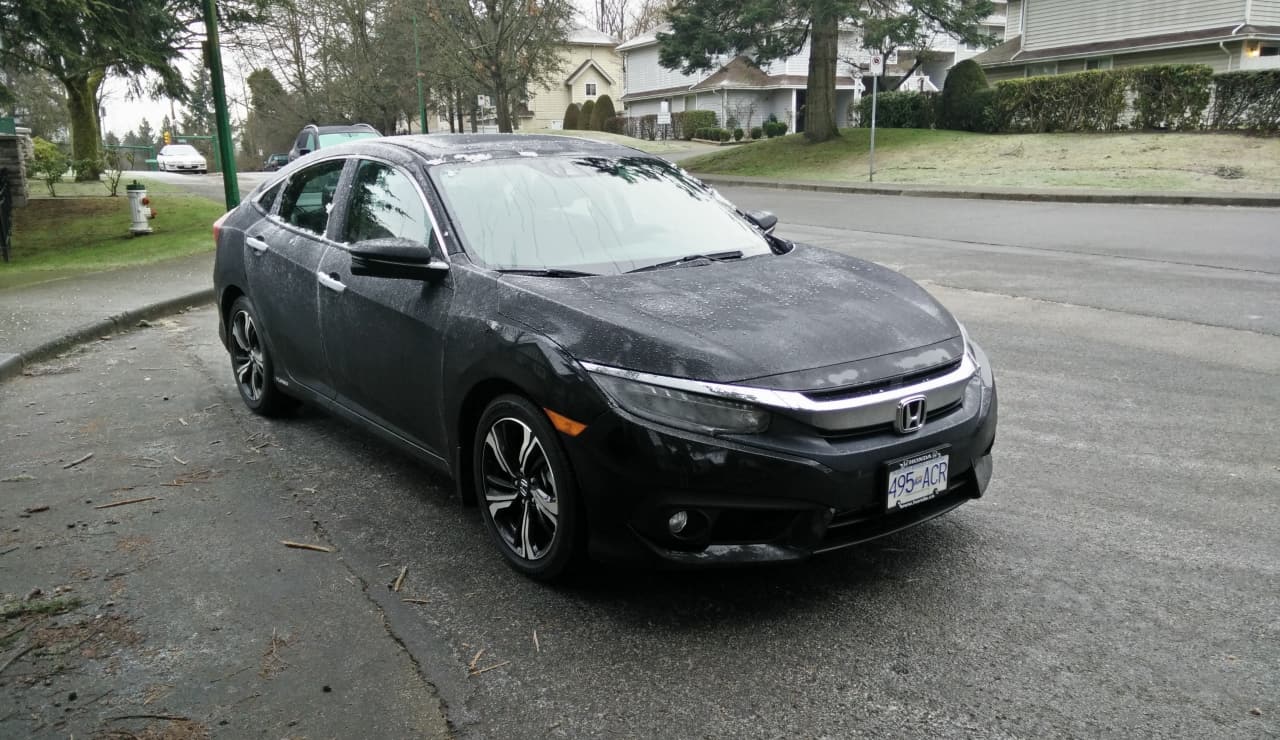 Being at the top isn’t easy, you seem to inspire a lot of competition and every one of those competitors want to bring you down and take your crown. The Honda Civic has been at the top for the last 17 years, at the top of the Canadian car market that is. It has been the best selling car in Canada for almost two decades and now the Japanese car maker has introduced a fully redesigned Civic, and we just spent a week reviewing it. Check out our reviews of the previous generation Honda Civic Sedan and Civic Coupe.

The all-new 2016 Honda Civic is the 10th reiteration of this popular car. For the 10th generation, it’s bigger, more luxurious, offered with lots of equipment, more powerful and fuel efficient, and is available with a turbocharged engine. This is the first time ever a turbocharged engine has been used on a Honda badged car.

The new Honda Civic offers a lot of choices to the consumer. The car comes in sedan, coupe, and for the first time in Canada (and USA), a 5-door hatchback format. The Civic will also be offered as a sporty Si model and another first for North America is the introduction of the Civic Type-R. The future is looking good for the Civic, Honda, and the consumer.

Customers can choose from two different engines on the new Civic; a 2.0 liter inline 4-cylinder engine, which is offered with the DX, LX, and EX trims, producing 158 horsepower at 6,500 rpm and 138 pound-feet of torque at 4,200 rpm. Power is sent to the front wheels via a 6-speed manual transmission (standard on the DX and LX trim) or a Continuously Variable Transmission (available on the LX and standard on all the higher trims).

The big news is the availability of the 1.5 liter turbocharged 4-cylinder engine with direct injection. This engine is offered on the top two trims, the EX-T and Touring, producing 174 horsepower at 6,000 rpm and 162 pound-feet of torque between 1,700 and 5,500 rpm.

Our review car was equipped with the turbocharged engine, and what a sweet little engine it is. It has plenty of power for a family sedan and it isn’t too bad on gas. The car takes off from stop with ease and it quickly gets up to speed. According to Honda, the turbocharged Civic sedan can do the 0 – 100 km/h (0 – 62 mph) sprint in 6.7 seconds, which is pretty fast for a family sedan like this.

The engine is very smooth and quiet, mated to the CVT, it makes for smooth acceleration. The turbocharged Civic feels right at home on the highway, and passing slower vehicles doesn’t require too much effort. I would have liked paddle shifters on the steering wheel, which makes passing on the highway even easier with the drop of a simulated “gear”.

The turbocharged engine is also pretty frugal on gas. According to Honda, the Civic Touring should consume 7.6/5.5/6.7 L/100 km city/highway/combined. For our week long review, we managed 8.5 L/100 km in the city and 6.0 L/100 km combined, with 50/50 city/highway driving. Our numbers are based on the information provided by the on-board trip computer. Overall, it’s a pretty efficient car, especially on the highway.

The new Civic also benefits from a more luxurious ride, thanks to new suspension bits and a longer wheelbase. I’d say the car drives more like an entry level luxury car than a small family sedan. The ride is very relaxing, I was pretty impressed with how comfortable it was and how easily the suspension soaked up bumps and ruts on the road. 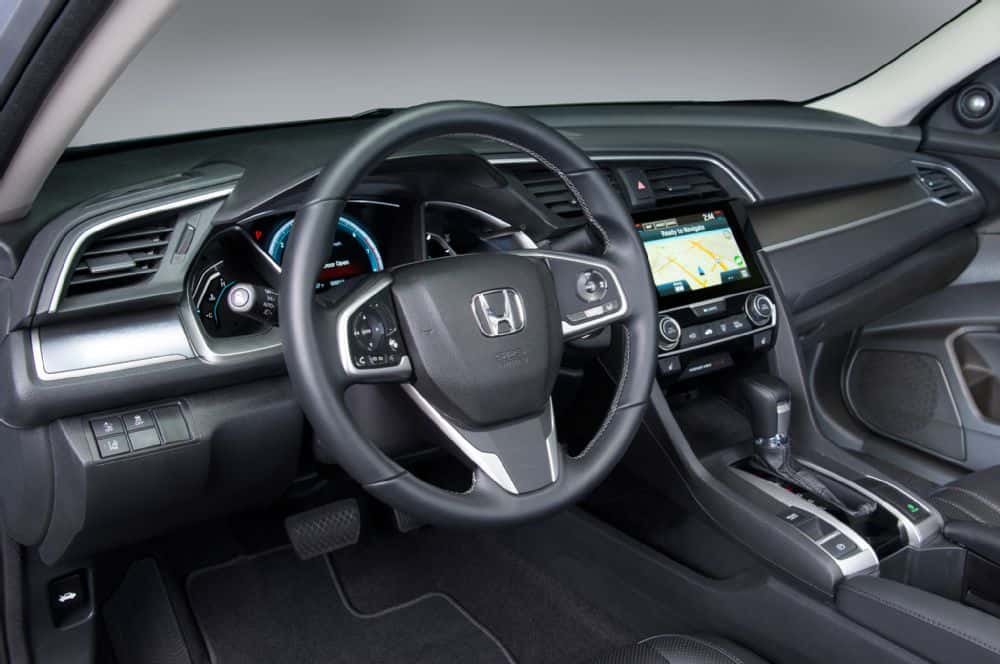 The interior also has an upscale feel and look to it. The dashboard is covered with soft-touch materials, however, there is hard plastic on the sides of the center stack. The interior is feels much more open than the previous generation Civic, and it actually is bigger on the inside compared to the last model. The new Civic is 75 mm longer, 50 mm wider, 20 mm lower, and has a 30 mm longer wheelbase. All that translates into more room for the occupants, making the car feel more like a mid-sized car than a small car. There is plenty of leg room for the rear passengers and the back seat is very comfortable, however, the rear floor isn’t flat anymore, due to the lower ride height, there is a hump in the middle for the exhaust. So the middle passenger will be bumping knees with the other two passengers in the back seat.

The interior is very quiet, it’s a good improvement over the previous Civic. There is a bit of noise at take off but once you’re up to speed, the engine quiets down and is barely noticeable. Driving at speed on the highway is very comfortable and there isn’t much wind noise in the seams on the windows. 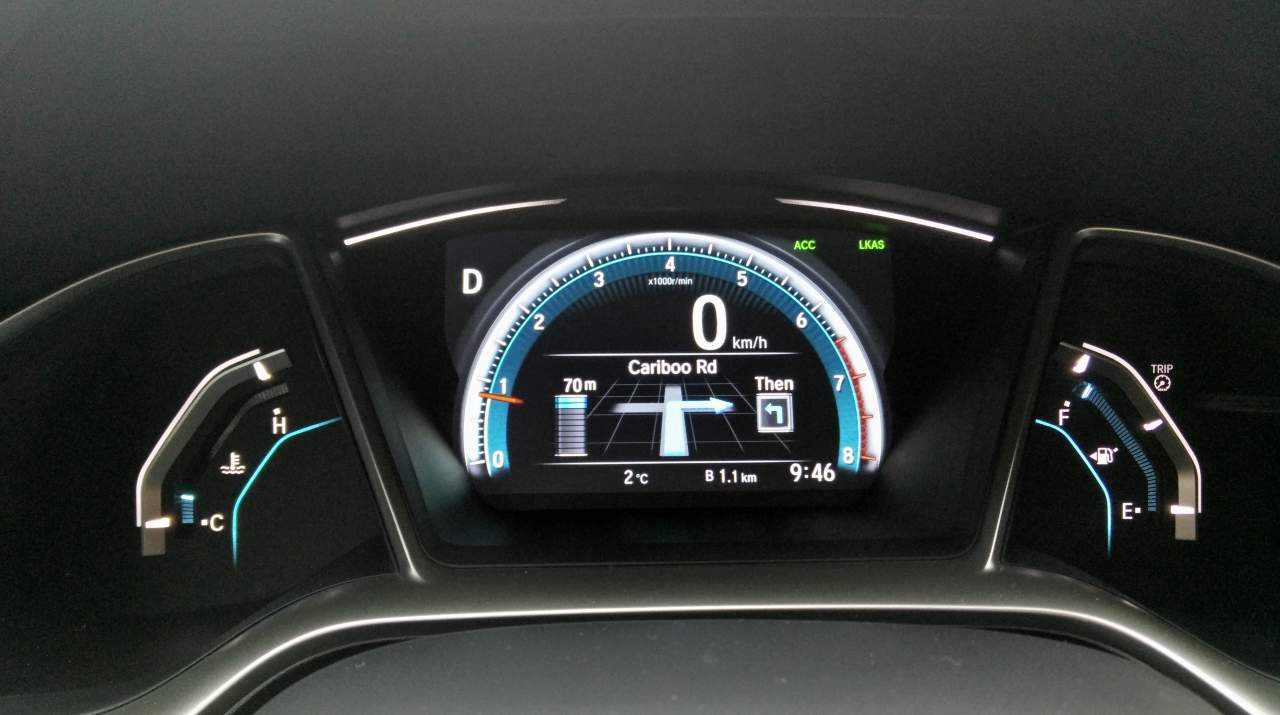 The Civic also gets a new layout for the gauge cluster, the two-tiered gauges are gone, which I had become quite fond of, but the new layout also seems to work well. The new gauge cluster has very clean and simple design, with a large round gauge in the middle surrounded by a smaller gauge on each side. The center gauge is digital, displaying the rpms and speed. The center of this gauge is dynamic, it can display information like the trip/mileage, navigation directions, boost gauge etc.

The center stack features a minimalist look with only a few buttons, most of the functions are controlled via the 7” touchscreen, which is very responsive. The center screen also acts as the display for the backup camera and the right side “LaneWatch” camera. The LaneWatch camera has a very crisp display, it has improved over the last generation camera, but the rear camera isn’t as clear. I personally would’ve preferred a much clearer rear camera, because in the rain and dark the rear camera’s images were of low quality and it was hard to see what was behind you.

Like I mentioned above, the Civic has grown in size, it looks much more substantial now and has quite a bit of road presence. The overall shape of the car looks like a hatchback, but it has an actual trunk. I guess the 5-door version will connect the trunk to the rear glass, making it a true hatchback.

I like most of the styling on the new Civic, the front end has an aggressive look to it, it looks quite sporty with its low “beak” and kind of looks like an Acura product. The rear-end on the other hand doesn’t really do it for me, it is a little too fat to me, but looks are subjective and I’m already seeing quite a few of these cars on the road, so people are liking the styling overall.

Another surprise on the 2016 Honda Civic was the amount of technology packed into this car, especially on the Touring trim. The Civic offers tech that’s found on higher end cars, yet you don’t have to pay an arm and a leg to get the latest tech on your Civic. Below is a list of safety and tech features offered on the new Civic.

I was extremely surprised by the 2016 Honda Civic Touring; the amount of equipment offered, the refinement, luxury, power, and fuel economy were beyond expectation. The new Civic is going to be the new benchmark in this segment, and I have a feeling the Civic is going to be the top selling car in Canada for at least one more year, making it 18 consecutive years.

We’ll see how the competition responds to this challenge by Honda, because the 2016 Honda Civic is a lot of car for the money.