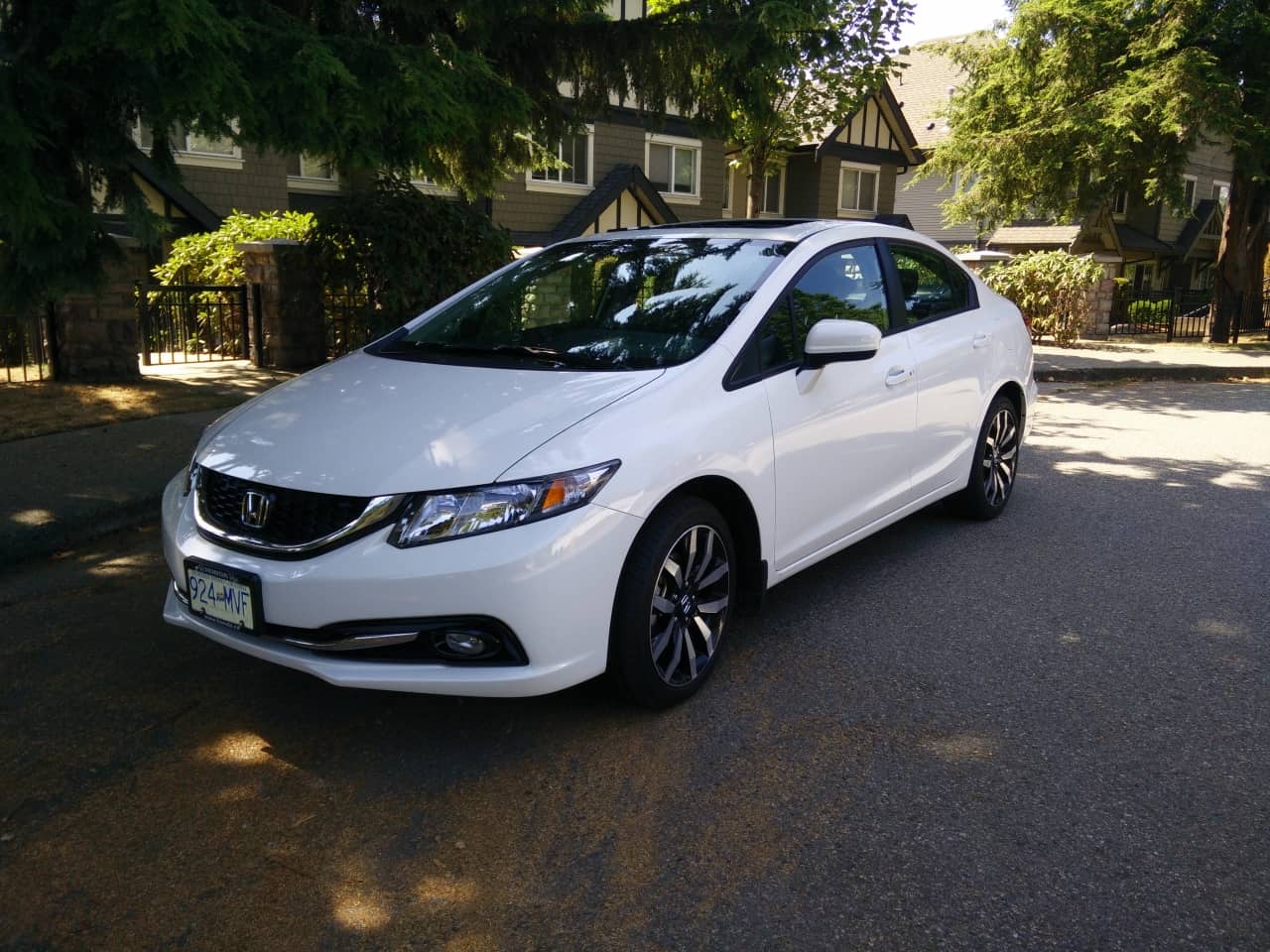 Last year I reviewed the Civic Ex coupe, that review covers most of what’s offered on the Civic, head on over to that review for a detailed look.

Being the best selling car in Canada for 17 years, Civic sedans and coupes can be seen on pretty much every street corner; unlike the Coupe, the sedan does have a bit more competition in this segment. The Civic’s main rival is the Toyota Corolla and other rivals include the Hyundai Elantra, Mazda3, Ford Focus, Chevy Cruze, and Nissan Sentra. The competition offers some enticing vehicles yet the Civic seems to come out at the top every year.

The regular Civic is offered in four trims in Canada, the base model DX with manual transmission is priced from $15,750, the next higher model is the LX, which is priced from $18,550 for the manual and $19,850 for the automatic, the EX is priced from $20,750 and $22,050 manual/auto, and the top of the line Civic Touring has a price of $25,350 and is only offered with an automatic transmission, these prices do not include Freight & PDI. The Civic sedan also comes in the sporty SI and the fuel efficient hybrid trims. 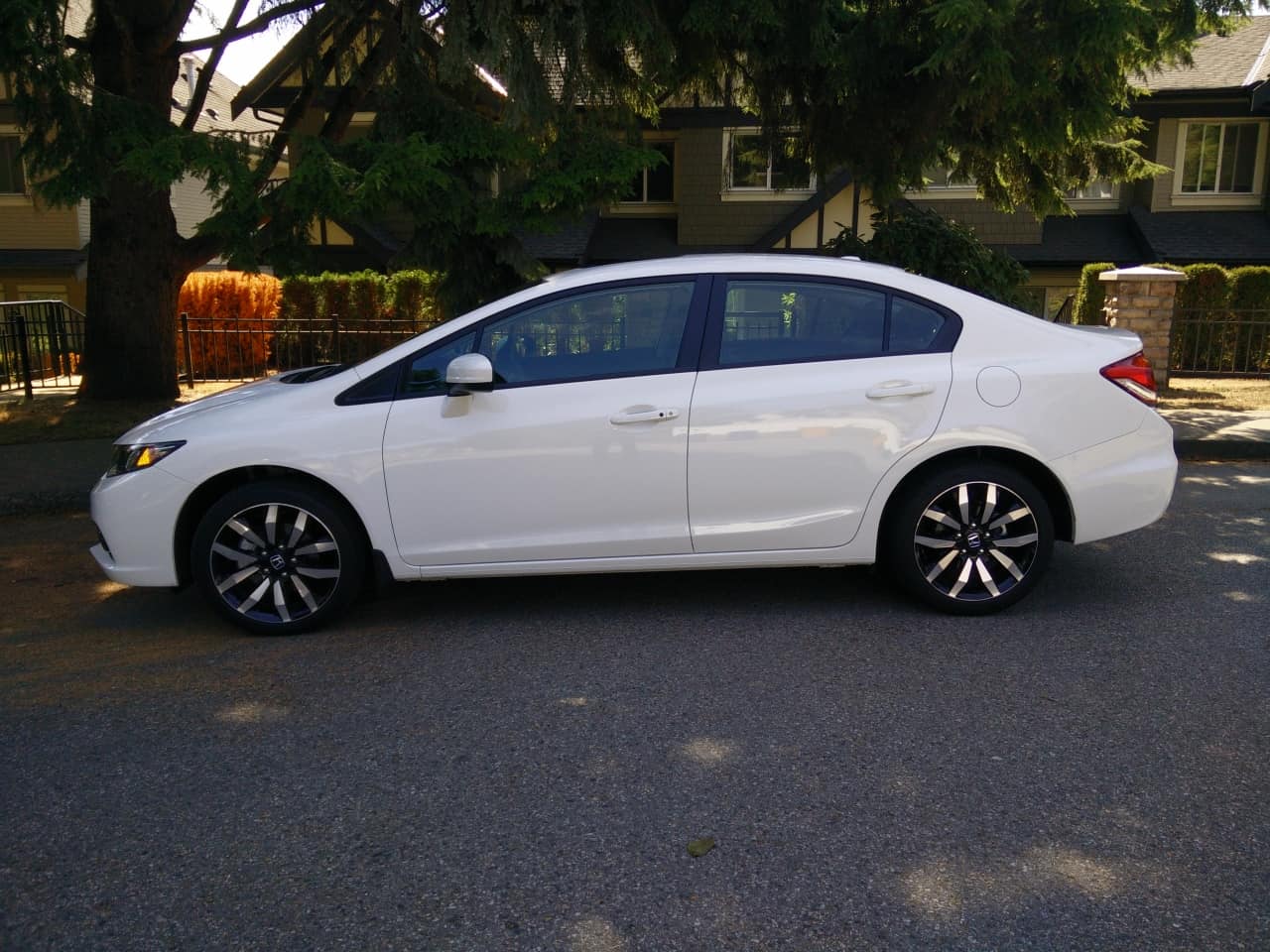 Honda Civic sedans are offered with 1.8 liter 4-cylinder engines, producing 143 horsepower at 6,500 rpm and 129 pound-feet of torque at 4,300 rpm. Power is sent to the front wheels via a 5-speed manual or CVT automatic transmissions. The base DX model is only offered with the manual, while the Touring only comes with the automatic.

Like I mentioned in my Civic coupe review, the 1.8 liter inline-4 engine is a pretty good engine for normal city driving and it also preforms pretty well on the highway. However, the sedan doesn’t come with steering wheel mounted paddle shifters, which would help with quicker downshift of the simulated gears and giving you more rpm and therefore making passing on the highway a bit easier.

Other than that, the transmission is very smooth and doesn’t feel like a CVT and is usually in the right power band in city driving. The transmission also has an “S” mode, which theoretically makes the car feel sportier, but putting it in the S mode made the transmission feel like a rubbery CVT. It holds the rpms for much longer, but it makes it really feel like there is only one gear, which was the biggest complaint in earlier CVT transmissions. I didn’t really enjoy driving the sedan in the “S” mode.

Unlike it’s main rival, the Corolla, the Civic is tuned to be a bit more sporty. The steering wheel seems to have a bit more feedback and the suspension is also a bit on the sportier side, it’s still a very comfortable suspension but the extra bit of sportiness is appreciated, especially by people that love to drive. The Honda Civic is popular for a reason, I found the car to be very comfortable and pretty quiet. The interior doesn’t have a conventional layout in the gauge cluster area, so it might take a new owner a few days to get used to. Having driven the coupe for a week, I felt right at home from day one in the Civic sedan. The two-tier gauge layout is a great safety feature in my opinion, as the top gauge with the speedometer is closer to the eye level and isn’t blocked by the steering wheel, the driver doesn’t have to take their eyes off the road to see their speed. Another benefit is that there is more space for the gauges, giving the driver bigger readouts and there is lots of space for all the little warning lights. The interior is mostly hard plastic but everything is built very solid. Having driven lots of cars over the years, I appreciate the way every panel feels and the thumps the doors make when closed. Some of the other cars in this class don’t feel as solid as the Civic.

The interior is also very spacious, with plenty of room for the front and rear passengers. The Touring model comes with leather seats, which are very comfortable and supportive and offer front driver and passenger heating.

The Civic is also offered with technologies found on other cars in this segment, such as Bluetooth connectivity, hands free phone, backup camera, proximity key with keyless start, and Honda LaneWatch blind spot monitoring system. I talked about this system in my review of the Civic coupe, I liked it a lot and used it even more on the sedan because I’ve gotten used to it. I think it’s a great system and hopefully Honda will start to offer it on Acura cars as well.

There is a good reason the Honda Civic is the best selling car in Canada for the past 17 years, the Civic has an affordable starting price and can be loaded up with technology and features that are available on higher priced cars. The Civic is pretty fun to drive and it gets pretty good fuel mileage, it has a solid build quality and it comes with Honda reliability. This is definitely a car for someone looking for an alternative to a small CUV.