If you’re looking for an affordable front wheel drive coupe, you have a very limited number of cars to choose from. Your options are the Kia Forte Koup, the Scion tC, and the Honda Civic Coupe. Unlike the Forte and tC, the Civic coupe has been around for a very long time and has been the bestselling passenger car in Canada for the past 16 years. Not only does the Civic have a great history, it also has the lowest starting price, $18,895 versus $22,295 for the Kia and $21,490 for the Scion.

Back in the 1990’s, the Civic coupes and hatchbacks were the favorite cars amongst the tuner crowd. If you watch any of the first few Fast & Furious movies, you’ll see plenty of customized civics making appearances throughout the movie; and if you had visited any car shows a few years ago, you were sure to see at least a dozen “done-up” Civics. The tuner industry may have gone into hibernation recently, but the Civic is still going strong and selling like hotcakes. 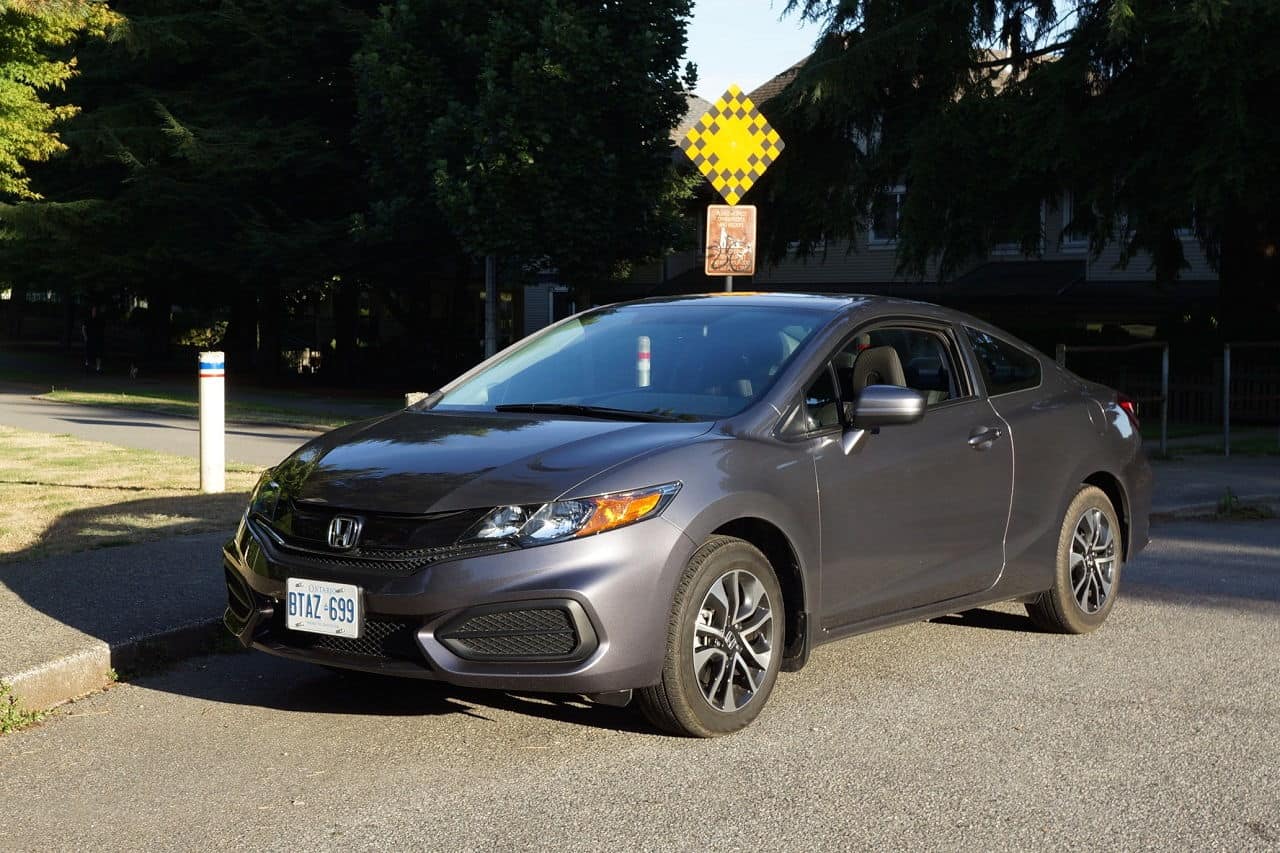 Last week we had a chance to drive and review the 2014 Honda Civic EX coupe, the 9th generation of the popular compact car. The current generation Civic was introduced as a 2012 model and has been put under the knife for both the 2013 and 2014 model years; so if you see one of the latest generation Civics and you think it looks a little different, don’t be alarmed, it’s just one of the newer models.

Like the Toyota Corolla, which we reviewed a few weeks ago, the Honda Civic sedans and coupes are everywhere. The Honda Civic is very popular car amongst the young, the old, and every age group in-between. I don’t think a day ever goes by where I don’t see at least one Civic. Unlike the Corolla, the Civic does have a bit of emphasis on “sportiness”, it handles a little crisper and the extra horsepower does help it go a bit faster. The 143 horsepower is good enough for the daily commute, for me, which consists of mostly city driving, going from one red light to the next. I didn’t really feel like I needed more horsepower and on the highway, once you’re up to speed the car drives smooth. But for passing, you do need to “downshift” to get the rpm up and get the car moving.

Speaking of downshifting, our review Civic EX Coupe came with the optional CVT transmission. Again, I didn’t mind the CVT on the Civic as much as I thought I would (I felt the same way with Corolla), I guess adding those simulated shift points does make the CVT transmission bearable. In the normal “D” mode, the transmission “shifts” gears pretty early on, for fuel savings. But if you do want to have a bit of lively feel to your drive, put it in the “S” mode and the gears are held a little longer. You can let the car shift for you or use the paddle shifters on the steering wheel. The one good thing about these paddle shifters is that you don’t need to be in the “S” mode to downshift, which is especially useful when you have a sudden need for power to quickly pass someone or go uphill.

The ride on the Civic is very comfortable, the car soaks up the usual bumpy city roads with ease and the highway drives are also very comfortable. The Corolla is a bit softer in the suspension department, but the Civic does give you that tiny bit of extra sportiness and you don’t lose out on comfort. The interior on the Civic is very quiet; under normal driving conditions, you barely hear the engine. You do however hear the engine whine when you really push it, but on most commutes it’s surprisingly quite. I didn’t feel much wind noise or tire noise; in fact, I think the Civic was almost as quiet as my brand new 2015 Infiniti Q50S. The interior layout isn’t traditional, some people might not like the layout, but I personally think it’s quite sporty with everything angled a bit towards the driver. The split dashboard/gauge cluster takes a bit of time to get used to but once you’re used to it (after about a half day), it really is very functional. The speedometer is placed on top of where the traditional gauges go, and it really does make it easy to look at your current speed without taking your eyes off the road; it’s a different way of showing the speed and is reminiscent of the Mazda3’s pop-up HUD display, which I also like a lot because you don’t need to take your eyes off the road. Yes I know it only takes a split second to look at a traditional gauge, but once you use this system, you’ll appreciate this layout and at highway speeds, a lot can happen in a split second. The interior layout is pretty simple and self-explanatory. There is a large 7” screen on the center console that displays information on the entertainment system, acts as a backup camera, and also works with the right-side mirror mounted camera. This camera looks at your right blind spot and shows video on the screen when the right turn signal is turned on or with the touch of a button on the signal lever. It’s a useful feature but does take a bit of getting used to and I still kept doing my normal shoulder check.

My only complaint about the 7” screen is the way it displays information, the entertainment screen looks like something from the 1990’s, it could use some color (other than blue and black) and updated graphics.

On the EX trim, Honda also offers something called “Display Audio” which lets you port the screen from your iPhone 5 or above to display on the screen, you’ll need to download an app to use this system and it gives you access to Aha radio and you can use your phone’s navigation system on the screen.

There is plenty of room for the front passengers; the rear seat would be a bit tight for people over 5’ 8”. I sat comfortably behind my own seating position (I’m about 5’ 8.5” tall). The rear headroom was also enough for me, with about an inch to spare, I would say people that are taller than 5’ 9” would be touching the rear window.

Overall, I was satisfied with the 2014 Honda Civic EX Coupe; it’s a good car for the daily commute. The car has enough room for my needs, some cool gadgets, it is pretty comfortable driving around the city, and if you can get the fuel mileage closer to Honda’s numbers, then you have yourself a winner.