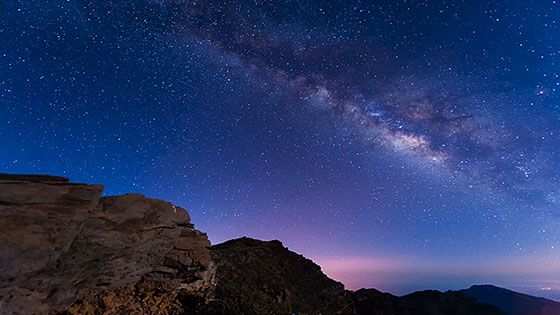 I’m a big fan of time-lapse videos. They’re often filmed in exotic or unique locations, and even when they aren’t, they never fail to highlight hidden or largely unseen aspects of wherever they were filmed. There are certain things that just can’t be captured in a single frame… such as the stunning beauty of the island of La Palma.

Some call it it “Europe’s Hawaii”, and others “Isle Bonita” – beautiful island, but whatever name you use, this small, volcanic island in the north-westerly region of the Canary Islands is rife with incredible scenery of all variety, from lucious green forest-scapes, to rolling ocean and clouds, and enough volcanic rock formations to make Kim Stanley Robinson blush. As you’re about to see for yourself, Christoph Malin did a fantastic job capturing the island, both day and night.

The Island of La Palma, Time-lapse by Christoph Malin

Though La Palma itself looks beautiful, what I found most enjoyable was watching the night sky. I’ve been watching a whole lot of Star Trek recently, and that combined with the happenings of SpaceX and Nasa’s Curiosity Rover in 2012 have left me feeling rather excited about this whole space business. If you suspend your disbelief for just a moment, you can almost imagine for a moment that a few of the sky shots are of a space ship traveling warp speed.

Making of Island in the Sky, and more Christoph

Filmed over the course of about a year, Christoph Malin worked his butt off to capture all of the incredible footage of La Palma that you just watched. If you’re a photographer, or even just a fellow who enjoys learning how things are put together, then I highly recommend having a look at this “making of” article over at Nikon Rumors. It covers just about anything that went into creating the video, and includes a bunch of awesome photos as well. Definitely worth checking out.

Now, I’m guessing you also want a little more of the good stuff… you know, the straight up time-lapse goodness. Thankfully, Christoph has been hard at work over the years on a metric shit-ton of time-lapse videos, and you’ll find all of them over at his official website. Once again, absolutely worth checking out, and I’m looking forward to seeing the next amazing place he captures on film.