Someone told me that a lot of my posts start off with tales from my childhood, and it’s true – I did learn a lot as a child. I learned how to scavenge nudie magazines from the recycling bins… I learned how to build awesome treehouses, and perhaps most importantly of all, I learned how not to blow my hands off using modified fireworks.

You see, where I grew up, firecrackers were illegal. When I wanted to get the same effect, I had to make a few modification of my own. Unlike Mike McHenry, the fellow who amassed this gigantic collection of firecracker labels, I couldn’t just waltz down to the local fireworks shop and go to town. Thankfully, Mike has been collecting these labels since before I was born, and his collection provides all the material I need to live vicariously through him. 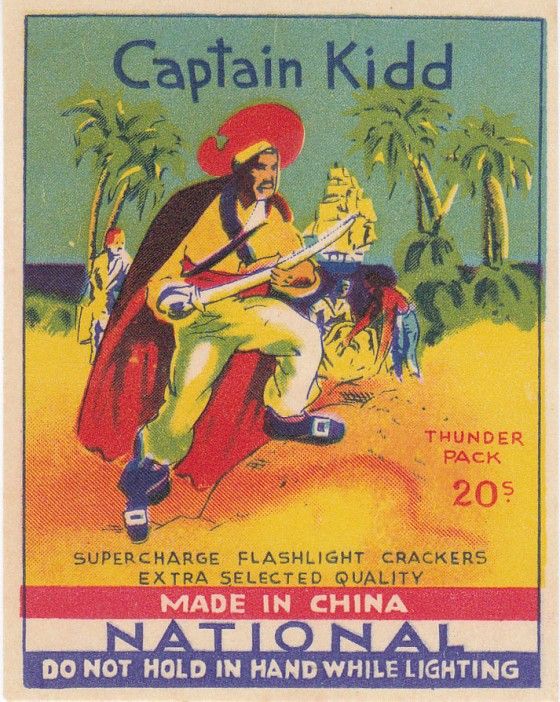 You know, this reminds me of something… a certain Morgan perhaps? Nah, couldn’t be. Much like the last package, this reminds me of something. What they should have done is put a firecracker in the camel’s mouth instead of a cigarette. I absolutely love the face on this cat. I can’t tell if the cat itself is exploding, or if it’s simply freaked out that firecrackers are going off all over the place. Either way, the design is brilliant, and worthy of adorning the arm of any tattoo loving, fireworks aficionado. I don’t think anyone would want to mess with this guy. Seriously, look at his face! Blazing Commando will fuck you up. This is one crazy ass looking bat. I actually saw quite a few bats when I was traveling in Belize, and none of them looked like this. No, the ones I saw actually looked rather friendly. This one looks like it would land in my hair and leave a lit firecracker there. I think this kid has been eating the firecrackers instead of lighting them. See that smear on his lips? It’s either lipstick, or part of the packing that got stuck on his mouth as he violently chewed on the packaging. Never have I seen such a happy boy and his dog lighting firecrackers. It’s probably because they realized that these are firecrackers and not crackers. I’m glad the package says “CAUTION – EXPLOSIVE” or the first bit really would have gotten me. Are you thinking what I’m thinking? What kind of, uh… pleasures, is this guy getting? 🙁 Strangely, it appears that only his oldest son is unhappy. Perhaps daddy doesn’t treat him equally? 😐

Aren’t these great? Mike McHenry did an amazing job collecting all of these, and what I’ve shown you here is but a sliver of his entire collection. He’s collected hundreds since he first began in 1968, and you can view the full range on his Flickr page, which – if you’re like me – will induce wave after wave of envy. Having amassed such a massive collection of one thing must be very satisfying for Mike, especially considering he was able to blow up all the firecrackers along the way too. You lucky, lucky man.