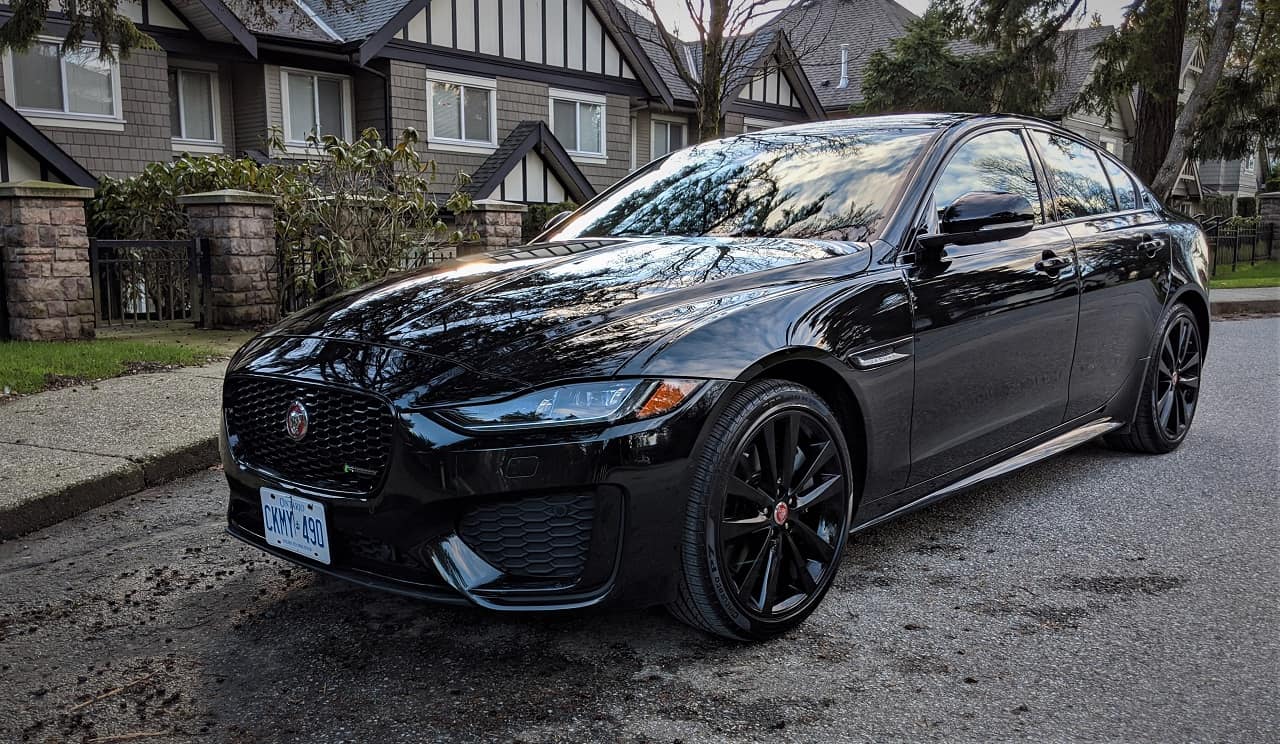 The Jaguar X-Type was the British automaker’s answer to the BMW 3-Series and Mercedes-Benz C-Class, a car that didn’t live up to expectations. Jaguar tried again with the newly name XE sedan, which was a much better attempt, but sales didn’t really take off; we reviewed one of the original XE a few years ago, have a look at that review to get caught up.

For 2020, Jaguar decided to give the XE a bit of an update, with a new front and read fascia and an updated interior, specifically the area around the climate control system.

In terms of packages, things have changed a bit since we last reviewed the 2017 Jaguar XE. For 2020, the Jaguar XE is offered as base XE SE trim and the “R-Dynamic” trim. The base trim has a starting price of $49,000 and the R-Dynamic starts at $55,800. Don’t let the base price fool you, the XE SE trim’s price can hit $70,000 with the addition of all the packages, such as heated/cooled seats, premium leather, carbon fiber interior trim, 360-degree cameras, blind spot monitoring etc. There are a lot of different packages/items you can add to increase the car’s base price by almost 50%. The price of the R-Dynamic trim can top out at over $75,000; these prices don’t even include accessories, Freight & PDI, and taxes.

The Jaguar XE can become quite an expensive car, it’s pricier than the Mercedes-Benz C-Class and the BMW 3-Series, these cars are the leaders in this class and have a much longer history and prestige associated with them.

Jaguar’s claim to fame is sporty driving dynamics, and the 2020 XE doesn’t disappoint. I would have liked to see the V6 offered with this car, as it’s a really nice engine that I’ve enjoyed a lot in the F-Type S. However, the 4-cylinder engine, especially with the higher output performs quite nicely.

The 4-cylinder turbocharged engine produces plenty of power and gets the XE moving quickly. 0 to 100 km/h time of 5.7 seconds is pretty impressive for a car equipped with a 4-cylinder engine. The engine works perfectly with the 8-speed ZF transmission, which is found on the rest of JLR lineup.

The XE is quick car, but for some reason I didn’t feel like it was going that fast even when I was going faster than I should. It doesn’t have that sense of urgency you’d get in other cars that can do sub 6-second 0 to 100 km sprints. I think the lack of exhaust noise and the transmission working smoothly removes all the drama (sensation of speed) from the equation.

I found the engine to be on the louder side, and not in a pleasant way, it sounded more like a diesel engine than a gasoline engine. And there’s barely any exhaust sound, even in the dynamic mode. I would’ve liked the option of active exhaust, where I could manually open/close the exhaust valve to make it sound louder, which is found on other Jaguar vehicles.

Like other Jaguar vehicles, the XE comes with JAGUARDRIVE CONTROL system, which offers different driving modes like Eco, Comfort, Dynamic, and Winter. There’s a noticeable difference between the throttle response and gearshifts between the different modes. For normal city driving, the Comfort and Eco modes work well, the Dynamic modes makes the car feel sportier. However, it isn’t as big of a step up in performance feel as with the V6 and V8 engine cars.

The steering feel is pretty decent, the car goes exactly where you point it and the steering has a good amount of weight to it. The suspension is also not too aggressive, it works well in most driving conditions.

The overall shape of the 2020 Jaguar XE is the same as the pre-facelift one, however the front has been reworked significantly. The front now features much sleeker LED headlights, which I like a lot. These headlights change the look of the front of the car considerably and make it look more modern. The front grill looks wider and lower and the bumper has larger (fake) air intakes. The side view looks the same as before, the taillights are new and look much sleeker now. The lower bumper has also been reworked, to give it a sportier appearance.

Overall, I personally like the design of the 2020 XE a lot, not everyone will agree with me. I think it’s elegant and sporty, and it turned quite a few heads when I was driving it around.

The interior on the 2020 XE also see some updates, one of the main one is the change in the climate control section. Instead of physical buttons, now there’s a touchscreen that lets you manage airflow, heated/cooled seats, and a couple of other items that you can customize. This is similar to what we saw on the I-Pace. The gauge cluster has also been updated, now there’s a large TFT screen instead of analogue gauges, this screen can be customized in many different ways. You can display one gauge in the middle with square sections on each side displaying different info such as navigation, trip computer, entertainment etc. The screen can also display the classic two gauges with a speedometer and a tachometer. It can also be turned into a huge display for the navigation system.

The other major difference is the removal of the rotary knob for changing gears. I had complained about that on many Jaguar cars that were equipped with it, it felt old and not at home in a sporty car. I thought it was appropriate for the Jaguar XJ and the full-size Range Rover, the sportier cars should get the gear leaver from the F-Type, which is now standard on the XE and other sporty Jaguar vehicles. I know Jaguar didn’t change this because of me, but I’m glad they did.

The interior is fairly quiet, there is a bit of tire noise, but I’d say it’s on par with other cars in this class, the engine noise isn’t pleasant, however. I found the noise very noticeable, especially when the car was idling.

The materials used on the XE’s interior are soft touch, which is what I’d expect in this class of cars. There’s a good amount of room for the front occupants and sitting behind my seat settings (5’ 8”), I found there to be enough head and leg room, however, if the fronts seats are in too low of a position, foot room was very limited.

Overall, I think the facelift of the Jaguar XE is a positive step, however the competition is pretty stiff from established players like the BMW 3-Series and the Mercedes-Benz C-Class. And there’s new competition from the Koreans, with the introduction of the Genesis G70, which is a great value for money proposition.

The Best Gadgets for Your Elderly Relative to Stay Independent