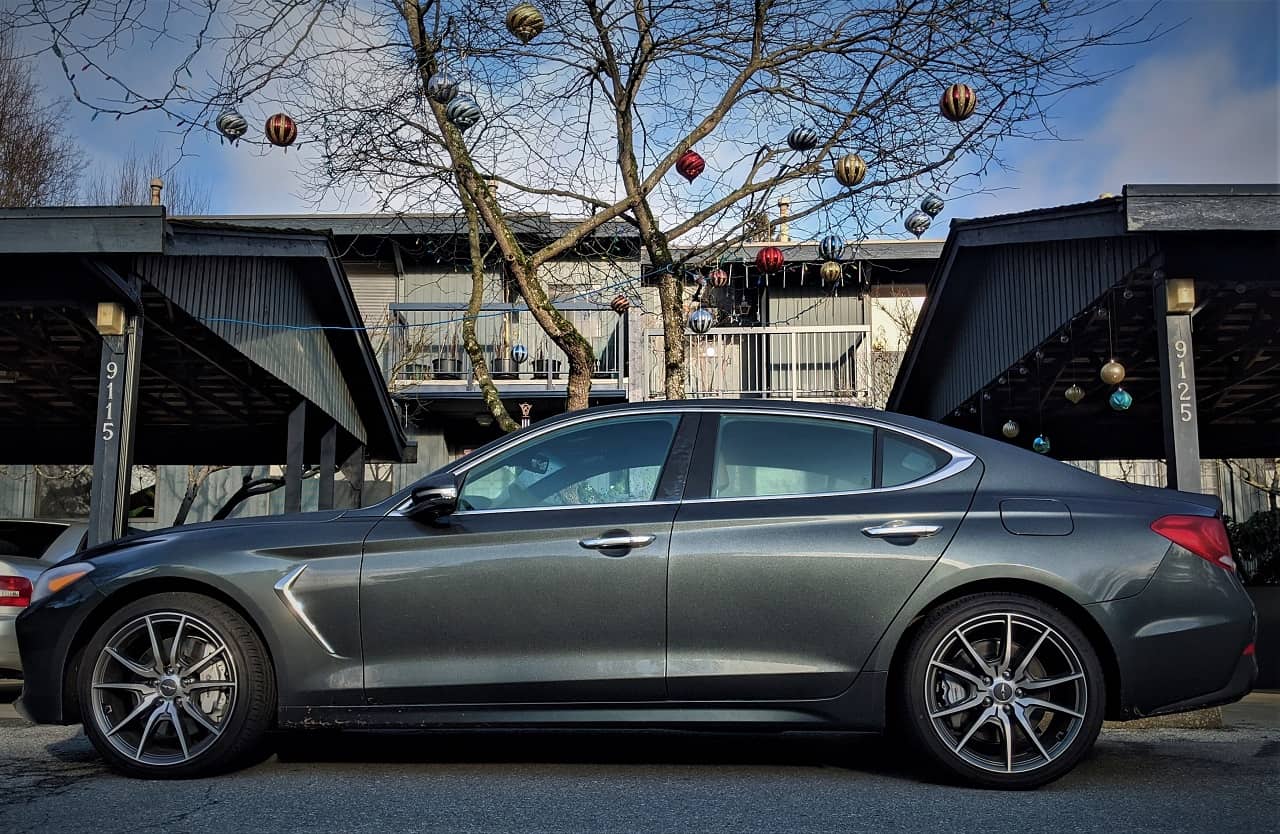 There was a time when every successful professional strived to own a mid-size luxury sedan, owning a 3-Series or C-Class was a rite of passage into the corporate world. This segment of cars is still alive, a lot of its thunder has been stolen by the SUV/CUVs segment.

The big three in this segment were the Mercedes-Benz C-Class, BMW 3-Series, and the Audi A4. Other automakers like, Acura, Cadillac, Infiniti, and Lexus tried to compete with the big three but they weren’t very successful until recently, even then I’d say only the Lexus IS has had a bit of an impact on the segment.

The 2020 Genesis G70 isn’t a cheap vehicle, but when compared to its European competitors, the price is quite reasonable. A similarly equipped BMW 3-Series or a Mercedes-AMG C43 would be priced in the $70k+ range.

The two engines offered on the 2020 G70 include a turbocharged 2.0-liter 4-cylinder and a turbocharged 3.3-liter V6. The 4-cylinder engine produces 252 horsepower at 6,200 rpm and 260 pound-feet of torque between 1,400 to 4,000 rpm. On all but the Sport trim, the power is sent to all four wheels via an 8-speed automatic transmission, the Sport trim comes with a 6-speed manual and RWD only.

Our review car was equipped with the V6 turbocharged engine, which produces an impressive 365 horsepower at 6,000 rpm and 376 pound-feet of torque between 1,300 to 4,500 rpm, power is sent to all four wheels via an 8-speed automatic transmission. Unfortunately, the manual and RWD isn’t offered with this engine, which would make things quite interesting. Maybe Genesis will do a special performance version of the G70 with even more power and manual/RWD? Probably not, but one can dream.

According to Genesis, the 3.3T V6 equipped G70’s should consume 14.1/9.5/12.0 Liters/100 kilometers in city/highway/combined driving. For our weeklong review, in pure city driving (just normal gentle driving), the onboard computer showed 13.5 l/100 km and 9.5 on the highway. So, I was able to slightly better the city number, but if you drive like a maniac, then expect the consumption to go up considerably.

The clear leader in this segment was the BMW 3-Series, I say “was” because I think other competitors have caught up to the 3-Series. However, it might still hold a fraction of a lead over the others. In my opinion, the lack of success for the Japanese and American competitors was their cars’ handling, after all, this segment is all about practicality with the performance and handling of a sports car.

Where others failed, the G70 comes out triumphant, I can confidently say the 2020 Genesis G70 is as good as the BMW 3-Series when it comes to driving dynamics and power. I haven’t driven the 4-cylinder G70 but the 3.3-liter V6 is great engine with more than enough power for this car. Although I have reviewed the Kia Stinger 2.0, which the Genesis is based on, but with a shorter wheelbase and different driving dynamics. I was pretty impressed by the 2.0-liter engine in the Stinger, I’m sure it’s a fun engine to have on the G70, hopefully we can review a G70 with that engine and the manual transmission at some point in the near future.

376 pound-feet of torque is available from the very low rpm of 1,300, which rockets the G70 into excessive speeding zones very quickly. The transmission works seamlessly to send the power to all four wheels without much wheel spin or drama. Racing from one traffic light to the next is a lot of fun, the G70 3.3T does the 0 – 100 km/h sprint in less than 5 seconds. The turbocharged V6 performs great at highway speeds, just put your foot down and the transmission drops down a gear or two and off you go, thanks to its quiet interior, you’re doing well over the speed limit before you even realize it.

The suspension and steering setup feels very European, I’d say it’s on par with the C-Class and 3-Series, the steering has a nice heavy feel to it. Unfortunately, there isn’t much feedback from the road, which is the norm nowadays for a vast majority of cars. The suspension is quite firm, I wouldn’t call it uncomfortable on most roads, but when the roads are pothole filled, it gets a bit uncomfortable. However, this is a sports sedan and it needs to have a firmer suspension, which is great for tossing it into corners, even in the slippery conditions of early December, with help from the AWD system, the G70 kept putting the power down without any drama.

The Genesis comes with 5 driving modes: Smart, Eco, Comfort, Sport, and Custom. These modes are self-explanatory. I personally mostly drove it in Eco or Comfort; however, I didn’t much of a difference in any of the modes other than Sport. In Sport mode, you’re getting all the power from the turbocharged engine and the throttle response is sharp, gears shift at a much higher rpm and the transmission downshifts quickly during deceleration, providing engine braking. The car feels much livelier and is even more fun to drive; I didn’t feel any difference in the steering or suspension even in this mode, the Sport trim does come with adaptive suspension so maybe it’s different on that trim. I would’ve liked the ability for the steering feel and suspension to be softer in the other modes, especially in the Comfort mode.

Overall, I think Genesis (parent company Hyundai) has done a great job at producing a real competitor to the Europeans, a car that drives just as good as them. I had a lot of fun driving around in the 2020 G70 3.3T.

I personally think the 2020 Genesis G70 is a great looking car, some might disagree with me, but the general consensus is that it’s a great looking car. The G70 is the best-looking Genesis on sale currently, it is after all, a vehicle that’s fully designed under the Genesis brand. The Genesis G80 is carried over from when that car was called the Hyundai Genesis and the new G90 sees a bit of a facelift, but it’s a carry forward of the Genesis Equus. Don’t get me wrong, the G80 and G90 are great cars, but the G70 is much newer design and a full Genesis.

The G70 has the classic front engine, rear drive layout, with the front wheels pushed as far forward as possible. The wheels sit out of the body, with curvy fenders covering them. There are quite a few swooping lines on the body, giving it a lot of character. The front of the car features a large chrome grill, which is blacked out on the Sport trim; the grill is big but not polarizing like some other manufacturers. The front bumper has quite a bit going on, with some fake and some real air intakes. The rear has a nice beefy look to it, with a pair of exhaust tips integrated into the lower part of the rear pumper.

The only complaint I have about the styling is the addition of the “boomerang-looking” chrome pieces on the front fender, with fake vents. Personally, I would’ve liked these to be not there at all, I think the body lines would look much cleaner without them.

The interior on the Genesis G70 is very elegant and modern. The materials used are high quality and there are lots of soft-touch surfaces. Some of the buttons and knobs do look familiar, having been taken from other Hyundai vehicles, but some parts sharing is to be expected to keep costs down.

The interior features a few knobs and a number of buttons to get you from menu to menu. At the center is an 8” touchscreen, which displays the map, media, climate, phone info, and the video feed from the cameras. You can scroll around the different screens by using the touchscreen or using the buttons below this screen. The climate system has its own separate area, with knobs and buttons for controlling the fan speed and temperature.

Below all of this is the storage area for phones and other small items, our review G70 came with wireless charging. Below this area is the gear selector and a knob for changing between the driving modes, with buttons for parking assistance, traction control, auto hold, and cameras surrounding it.

The interior on the G70 feels very premium and is quiet, it’s on par with the competition. Our review car came with premium Nappa leather, in brown, with diamond quilt stitching, which look absolutely beautiful. This brown leather is carried over into the door panels, the combination of aluminum and this brown leather on the doors looks fantastic.

I would have liked to hear more of the engine/exhaust sound inside the vehicle, this is a sports sedan after all. The interior has about average interior space for this segment. I found the front to have plenty of room and the seats can accommodate taller drivers/front passengers, but anyone that’s taller than 6 feet will take away much of the leg room from the rear passengers. The rear seat had enough room for me, with the front seats positioned to my 5’ 8” frame.

There are a few items I would like Genesis to add to the G70, these are just small “wish” items and are by no means a big deal, but they could take the G70 to the next level.

An added bonus with the 2020 Genesis G70 (and all other Genesis vehicles) is the inclusion of a few complimentary services:

Genesis’ parent company Hyundai is known for offering a lot of features even in their entry level cars, so they’re obviously going to offer all these features in their luxury brand. Our 2020 Genesis G70 Prestige AWD was loaded with a lot of tech, convenience, and safety features, below is a list of everything that came with our car. The higher “Sport” adds some extra “sporty” elements to the G70. Below is a list of what our review car was equipped with.

I think the team at Genesis has done a great job of producing a car that’s as sporty as anything in this class offered by the Europeans, and at a much lower price. Sure, the Genesis name doesn’t have the pedigree of its European counterparts, but it’s a great start and over time people will start to associate Genesis with luxury.

I had a lot of fun driving around in the G70 for a week, I think it performs and looks great. It is definitely a head turner, even in our review car’s grey color during grey winter months.

How to Plan for a Trip to Washington, DC