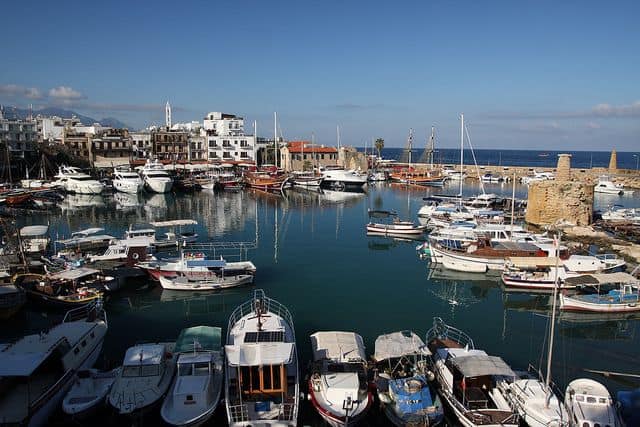 Cyprus is a large island country located in the Eastern Mediterranean Sea. Officially known as the Republic of Cyprus, this island nation is a member state of the European Union. Human life on this island dates back to the 10th millennium BC, and the island has been the subject of many archaeological expeditions over the years. Cyprus has a rich history, and even today, evidence of its cultural past is visible everywhere on the island. Today, Cyprus is a popular tourist destination, but not so popular that it is constantly overcrowded with foreigners.

The warm climate of Cyprus makes it a popular destination among travelers looking to experience the beautiful and tranquil waters of the Mediterranean. The average annual temperature on the coast is 24 °C (75 °F), with summer temperatures generally averaging around the high 70’s F. The hottest months are July and August, when temperatures average around 90° F. The summer lasts almost 8 months, starting in early April and coming to an end in November. The summer is very dry, with only a handful of rainy days. The winter in Cyprus is also very mild, and lasts only a few short months. This makes travel to Cyprus viable almost year-round.

There are two main cultural influences in Cyprus – Greek, and Turkish. There is a clear division between citizens of Greek descent and those of Turkish decent. Descendants of these ancient cultures tend to stay segregated, and there is little cultural interaction between the two segments. This makes for an odd tension between the locals, but also makes for some very interesting cultural attractions for travelers.

Modern Cyprus has a rich and thriving art culture. Scattered throughout Cyprus are countless examples of ancient art, dating back to the middle ages and beyond. Many religious icon paintings can be found, as well as painted churches, both modern and ancient. Today, Cyprus continues to be a center of artistic expression in the region, with many art galleries and museums. Cyprus is also home to some very unique cultural music, much of which dates back to ancient times.

The food in Cyprus is very unique, which helps to attract “foodies” from all over the world. Given that Cyprus is an island, it’s no surprise that most dishes served in this nation focus on a main protein of seafood. Squid, octopus, sea bass, and red mullet are all commonly served in Cyprus, as well as a large variety of seasonal fish. The warm climate of Cyprus makes it an ideal location for growing fresh produce, so you will find lots of fresh fruits and veggies in almost every Cypriot dish. Cypriot cuisine employs a unique blend of spices, which gives it a very signature flavor which is difficult to explain. Overall, the food on this island nation is fantastic and truly unique.

Fall is upon us and winter isn’t far behind, instead of shoveling snow off your driveway, you could spend some time in sunny Cyprus, there are lots of great companies offering amazing vacation packages.