The internet is full of artists trying to create a name for themselves. Many of these people go to extreme lengths to do so, creating “works of art” out of feces, vomit and other unique, but incredibly disgusting materials. Sometimes, though, you stumble upon an artist who’s created something that’s not only unique, but actually interesting too. Interesting in a “oh, that’s really awesome!” and not a “oh man, I’m going to puke.” sort of way. These shadow art creations by Rashad Alakbarov definitely fit the bill.

Rashad created this entire collection of shadow art using only lamps and carefully placed household junk. If you simply focus on the components *casting* the shadow, you’ll probably agree that they don’t really look like anything; they’re just heaps of junk. If you look at the shadows, though, it’s a whole other story. Those heaps of junk actually form intricate scenes ranging from beaches to cityscapes. 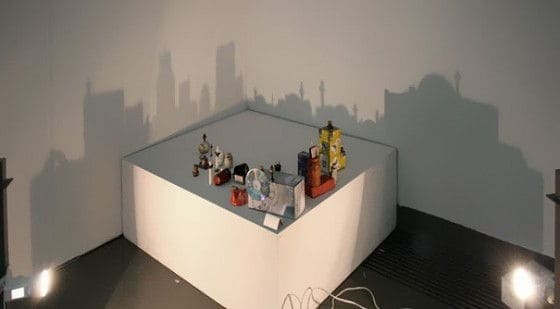 After seeing all of these, I can’t help but wonder if Rashad has even the vaguest semblance of a life. Why? Well, can you imagine how long it would take to place all of these objects in just the right way to cast shadows in such a specific manner? The colored glass exhibit for example… man, the amount of free moving pieces in that shot are staggering.

Though I find all of these rather impressive, my favorite piece by far is the colored glass lake shore. It has a nearly child-like style to it, which I find amusing given how complicated the scene must have been to create. Such a staggering amount of work to create such a simplistic scene; very cool.