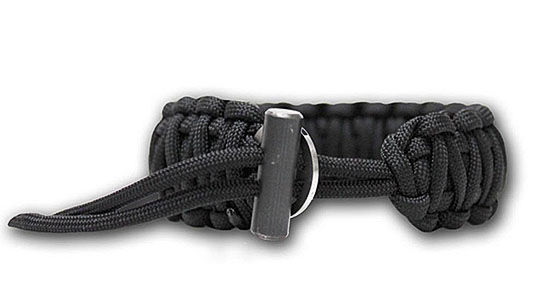 For someone who enjoys collecting and yes – sometimes even using – survival gear, little trinkets like this are hard to resist. Unfortunately, I haven’t had an opportunity to try this out yet, but this flint and steel paracord survival bracelet from Bison Designs is just too cool to wait on.

What you see is another not-so-typical survival bracelet, in the vein of the paracord bracelet with handcuff key I previously wrote about. You can’t use this to pick the locks on handcuff keys, but from what I’ve read, it’s pretty handy for starting a fire. Even more important than the fire starter, or the lengthy piece of 550 paracord used to make the bracelet, is the sharp knife hidden within the cobra weave. Utility knives are always handy, and having one in a bracelet could be especially useful. The only problem is that a person would need to unravel the whole thing, making it less than stellar for say, opening a letter.

Now, I do want to issue a warning. When it comes to survival gear, there’s a fine line between carrying that which is practical, and that which simply makes us look cool… at least in our own minds. I went through a phase of buying just about anything related to survival or the military, but eventually realized that not only was it pointless, but I actually looked like a giant nutcase – and for good reason.

These days I take a much more practical approach, and for the sake of both your bank account and your possible adventures in the bedroom, I encourage you to do the same. A paracord bracelet with a striker and flint is useful, but walking around armed to the teeth with knives, flashlights, climbing gear, throwing axes and many other pieces of apocalyptic scenario survival gear? Not so much.

If you’re interested in picking one of these up, you can do so at a number of places. Amazon carries it, or you can purchase it directly from the Bison Designs website for $25.00 USD. If you purchase it directly from the Bison website, you’ll have an option to make a small donation to a number of different charities. Being Canadian, I haven’t heard of any of them, so do your research first if you decide to go this route.