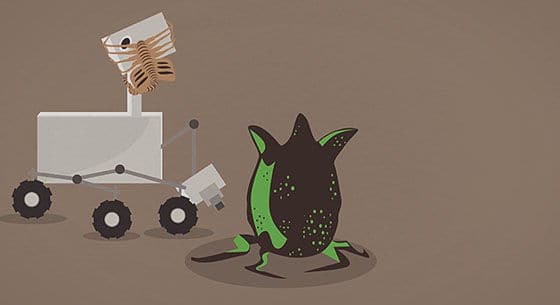 I’m generally not one for cutesy, animated videos, but this parody of “Dumb Ways to Die” features one of the catchiest songs I’ve heard in ages. It’s called Cool Things to Find, and it stars our favorite space faring friend, the ever exploratory Curiosity Rover.

If you haven’t been following the news, Curiosity has done some amazing things during it’s brief time on Mars. As it turns out, Curiosity has also discovered a bunch of awesome people and things that weren’t reported in the news, such as space cats and even Half-Life 3! If this all sounds rather confusing, just remember… it really doesn’t matter. Just watch the video, and then proceed to curse me for putting such a catchy song in your head.

If that didn’t cheer you up a bit, I don’t know what will. I think I need the singer narrating my life… that would be amazing. She would be somewhat akin to the restaurant piano player who tunes the music exactly to one’s footsteps, but, you know… more nerdy and scientific, because I’m all about Mars.

Now, if you found yourself disappointed by the lack of actual Curiosity Rover, I apologize. I was busy being entranced by the wonderful music. In the mean time, have a look at our article on the Curiosity decent to Mars, which – while kind of jittery and stilted, is an absolutely incredible thing to watch. It’s a robot landing on another planet, far away from here, and according to recent rumors, there may even be signs of organic molecules there!  I think we’ve got a very exciting decade ahead of us here on Earth, and with a little bit of luck, on Mars as well.

Remember… stay curious! Yes, even in that way, if that strikes your fancy. We don’t judge here.