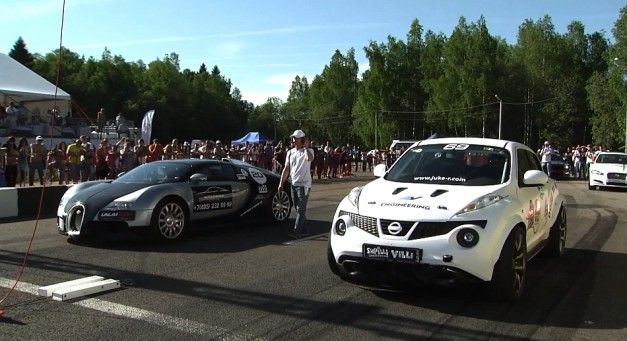 Alright boys and girls, it’s time to place your bets! Who is going to win the mile long race? The Bugatti Veyron which is one of the world’s most expensive and powerful sports cars ever created or a silly Nissan Juke crossover SUV? Okay, maybe the Nissan Juke isn’t your average factory crossover SUV here. The Juke featured in the video below is the Juke-R, a special project created by Nissan which features the twin-turbo V6 from the Nissan GT-R producing 545 horsepower.

But 545 horsepower against the Veyron’s 16-cylinder which pumps out 1001 hp isn’t exactly a fair match either. The Juke-R here has been modified a “tiny bit” to produce 700 horsepower thanks to a tuning kit made available by Sphilli Villi Engineering. The company offers a four-stage tuning kit for the Nissan Juke-R and GT-R. So who will it be? Comment below and let us know if you guess right or not.

When the Nissan Juke-R was first introduced, I was totally digging it and I still am. But the one engineered by Sphilli Villi Engineering is pretty awesome too! You want a sleeper vehicle? This particular Nissan Juke is the answer.