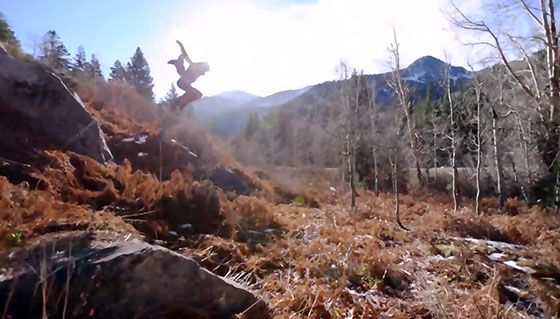 Parkour is one of the key elements that’s made the Assassin’s Creed franchise so very successful. Yes, they’ve given us amazing combat and exciting historical settings, but more than anything they’ve provided people with the ability to instantly do what some spend years training for – climbing up buildings, and scurrying about all sneaky-like.

Call it laziness, call it the American way, or just a simple desire to do what most people can’t do in real life. Either way, the end result is exciting and adrenaline inducing, and as of 30 seconds into the future, you’ll be able to see Connor’s new moves from Assassin’s Creed 3 actually used “in real life”. I mean, he’s running away from a man on a horse… dressed in a costume.

At this point you may be asking yourself, “why did Connor keep doing back-flips when he was clearly chasing somebody?”, and to that I say… don’t… even… worry about it. Clearly he’s a trained professional, and has long since learned the secret of momentum, something which you clearly know nothing about. Hint: it involves back-flips.

Minor silliness aside, I quite enjoyed the video. Ronnie Shalvis clearly has the moves, and though his Connor costume wasn’t the best I’ve seen, it was still pretty solid. The only thing I really would have liked to see more of is fighting. Yes, as meat-head as that sounds, I would have liked to see some well choreographed fighting scenes. I mean, Connor is a deadly assassin after all. He probably wouldn’t be very successful if he just chased after all of his targets for an hour, doing gratuitous flips and lurking in the tree tops. It’s just not the same, you know?

If you’re interested in picking up a few parkour moves of your own, I suggest heading over to Ronnie’s official YouTube page for starters. He appears to have a wide range of material and tutorials to get you started, and from then, well… the sky’s the limit, my friend. If you happen to live in Vancouver, Canada, then you’re really set, as there’s a whole gym dedicated to parkour there. I can tell you from experience, it’s pretty awesome.