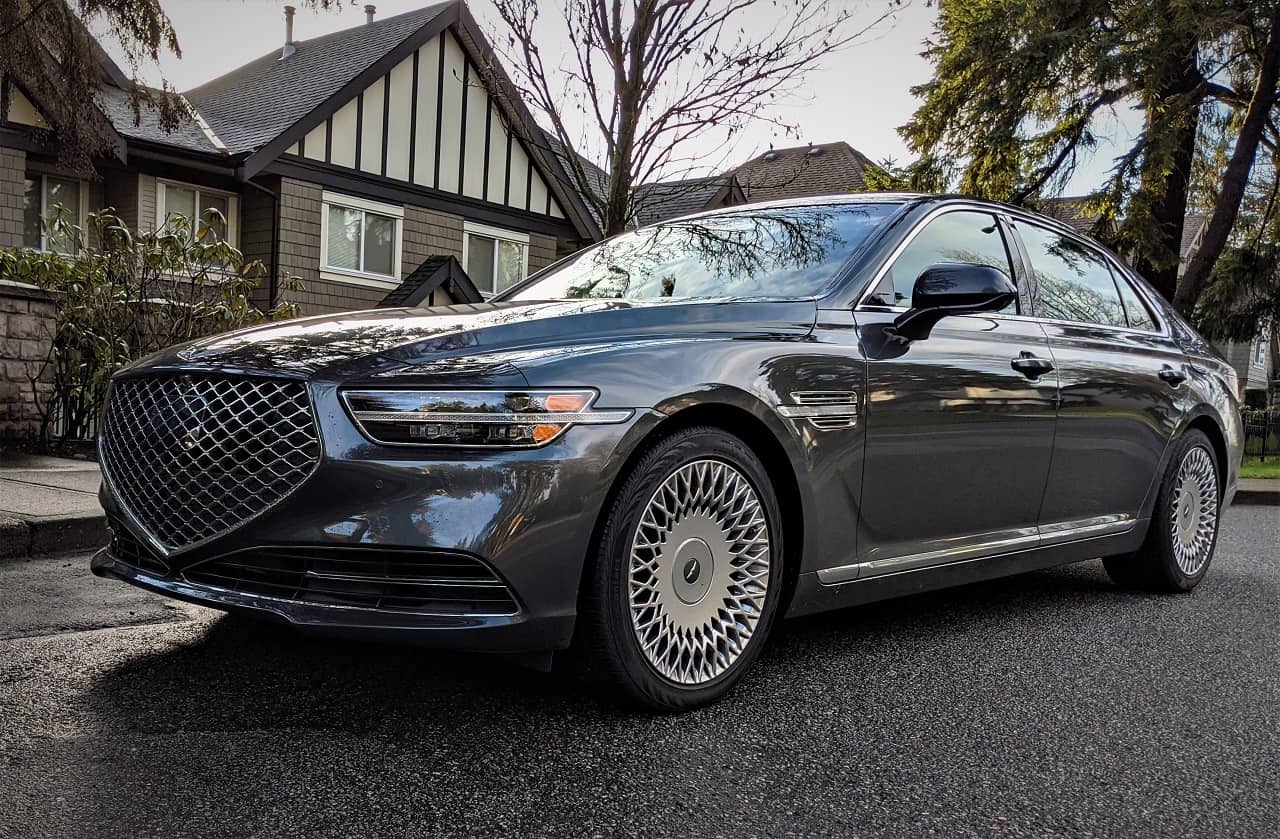 The Mercedes-Benz S-Class has been the king of the “executive sedan”, it is the go-to vehicle for a successful executive and it has been around for a very long time. Other manufacturers have tried to compete with it, with cars like the Audi A8, BMW 7-Series, and Lexus LS. Now there’s a new competitor to the S-Class, the Genesis G90. So let’s dive with in with my hands on review of the 2020 Genesis G90!

Genesis is the newest luxury brand in the automotive world, however, its parent company, Hyundai Motor Company, has been around for over 50 years, and the G90 isn’t an all-new car. It was previously sold as the Hyundai Equus, but since the introduction of the Genesis stand-alone brand, it has been called the G90, with a facelift for the 2019 model year.

A couple of weeks ago we finally had a chance to review the 2020 Genesis G90; below are my thoughts on the Korean executive sedan after spending a week with it.

German automakers are usually the top sellers in this segment, however, unlike them, Genesis decided to go a different route when it came to pricing the G90. The Germans usually start with a somewhat reasonable starting price, but they have tons of different packages you can add to the vehicle, with all the good stuff added, you’re looking at 70 – 100% increase in price over the base price.

With the Genesis G90, there’s only one trim offered with a single price. You can add a rear entertainment package for an additional $2,500. The base price, or fully loaded price for a 2020 Genesis G90 is $89,750, and unlike other manufacturers, this is out the door price (no added fees, PDI etc.), plus tax. A similarly equipped Mercedes-Benz S-Class or a BMW 7-Series will set you back at least $50,000 more.

On paper, the 2020 Genesis G90 is offered with one engine choice, which is a V8 engine. However, there is a 3.3T V6 offered, the same 6-cylinder engine found on the G70 and G80, but it’s a special order only and is not shown on their website.

Don’t get me wrong, it’s not like one of those old American cars that drove more like boats than cars; the ride quality is good and there is some stiffness to the suspension, but it’s tuned to be comfortable. The G90 would be a great car to be driven around in, in the back seat.

The 5.0-liter V8 engine is silky smooth and has plenty of power for normal city driving and it works great on the highway, passing slower cars is done with ease and the transmission responds quickly and effortlessly to the driving conditions. The transmission changes gears smoothly in congested city driving, most of time you won’t even realize a gear shift has taken place. Every aspect of this car is tailored for smoothness and refinement.

Styling on the 2020 Genesis G90 is on the conservative side, with the exception of the front-end styling. The front-end is quite aggressive and I’ve seen much internet debate on its size; personally, when I saw pictures of it, I thought the front grill was too big. But when you see the car in person, the front “Superman” grill doesn’t look as big, thanks to the overall size of the car. I had quite a few people walk up to me saying how much they liked the front-end of the car, and I personally liked it a lot more than I thought I would.

The rest of the car’s design is pretty conservative, especially the side profile. I did love the bold wheel design, which reminded me of something you’d find on an 80’s Mercedes-Benz S-Class (known as SEL/SEC etc. back then). These wheels are polarizing, however, a majority of the people I talked to seemed to love them. The rear end lights, with the thin reflector light running from one taillight to the other, reminded me of something from Lincoln. The rear lights are also shaped in a way (you’ll have look at the car from a ¾ rear view) that looks like the Genesis “wings” logo.

The Genesis G90 is a proper luxury car; this is a car to be driven around in. I think Genesis has done a great job at making a car that has this level of attention to detail and the use of high-quality materials. The word “opulence” comes to mind when I look at the interior of the 2020 Genesis G90.

As you enter the G90, you’re greeted with miles of leather, which is applied to the seats, steering wheel, door panels, and parts of the dashboard. The Genesis G90 has three options for the interior: Havana Brown with Olive Ash wood, Obsidian Black with Olive Ash wood, and Vanilla Beige with Grey Ash wood. Our review car was equipped with the Havana Brown Nappa leather and it looked absolutely fantastic. The leather used is very soft and looks and feels high quality.

A lot of the buttons look very familiar, that’s because they’re from other Hyundai products, they’re not as high-quality as the rest of the interior. But I can understand Genesis borrowing some of this equipment from its parent company to keep costs down.

At the center of the dashboard is a large 12.3” touchscreen with 720p display, which is quick to respond to the touch. It also displays crystal clear views from the rear, side, and front cameras. The screen can be split into two section with a large left section and a smaller right section, when it’s full screen, it looks really cool. The screen displays features like the navigation output, video from the cameras, entertainment, phone connection etc. Below the screen is an analogue clock, it gives the car a classy look, however, I personally would’ve chosen a different font for the numbers (I’m a bit of a watch snob, so I’d like to think this area is my specialty). Below all of this is a separate section for the climate control system, I like the ease of this layout, instead of having to go through multiple menus to get the right temperature, airflow direction etc.

Below this section is a short gear selector, a storage compartment for your phone, parking assist/camera button. Below that is a large knob for controlling the touchscreen and buttons for the heated steering wheel, heated/cooled seats, and the rear shade.

The front seats are extremely comfortable and come with three memory settings for the driver’s seat, memory settings are found in many cars, however, not too many cars have buttons that are called “Smart”. Pushing this button brings up a screen on the infotainment system where you enter your weight, inseam, and height and the car will automatically adjust the seats to the proper seating position based on your weight and height range.

As luxurious as the front seats are, the rear seats are where you really want to be, especially the rear passenger side. Like the front, the rear is an opulent place to be, it’s covered with soft touch materials and the luxurious Havana Brown Nappa leather.

As you’d expect in a big car like this, the rear seats have lots of leg, shoulder, and head room. Technically the rear seat is a three-passenger seat, but the middle seat is extremely small and would be uncomfortable to sit in for an extended period of time. The party trick of the G90 is revealed when the middle seat is eliminated, by brining down the armrest.

I would have also like to have a massage feature on all seats, most luxury cars in this segment offer massage seats. The Lincoln Continental I reviewed a couple of years ago had massage in the back seat, which was great for long drives.

There was a feature that I’ve never seen on another car, I’m sure there is another car (or a few) that offer this feature, but I’ve personally never come across it. On normal cars, other than the driver’s side, you get one button for the window on each door, but not on the Genesis G90, the two rear doors feature two window buttons, one for the window on that door and one for the other rear window. I thought that was pretty cool, you can open/close either of the two windows from either of the rear seats. These windows also came with privacy screens, which are controlled by the window up/down buttons.

The G90 is the Korean luxury automaker’s flagship sedan, so it’s loaded with all the bells and whistles you can think of, and the best part is, you don’t have to spend thousands on adding different packages to get the desired features you want, it’s all in one package.

Below is a comprehensive list of tech, safety, and convenience features the 2020 Genesis G90 sedan comes with:

I think the 2020 Genesis G90 is a great executive sedan, it’s loaded with the latest technology, convenience, and safety features. The G90 is also very luxurious and most of the materials used are top quality.

Will it steal sales away from the leader in this class, the Mercedes-Benz S-Class? Personally, I don’t think it will, but it might sales away from some of the European competition in the midsized class, because you’re getting a full-size car for the price of a mid-size European luxury sedan. I also believe customers that are buying these large executive sedans are looking to impress with the name-brand, and I believe Genesis has years to go before it is considered a status symbol.

But I do believe the Genesis G90 is a very good try and I hope to see the company succeed, we need more competition in the luxury market.

The 10 Best Valentines Day Gifts for Her