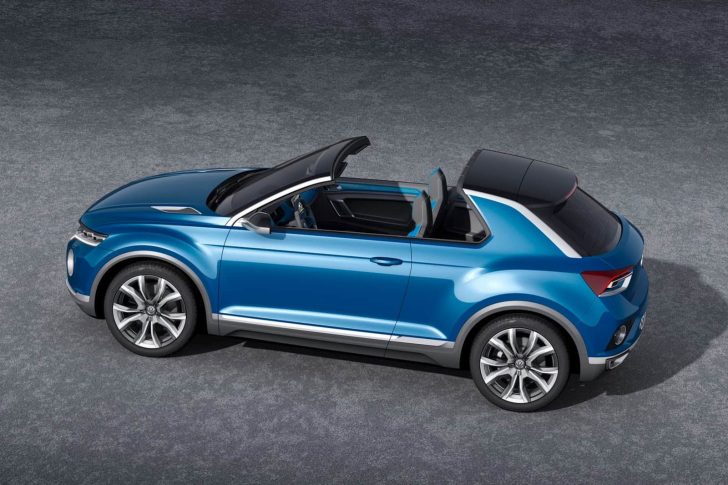 I’ve never been a fan of the Volkswagen brand and a top down crossover SUV is just wrong on so many levels with a Nissan Murano being the prime example. However, this Volkswagen T-Roc concept actually pulls it off quite well and looks appealing (in my opinion). Unlike the Murano, the VW T-Roc is a targa top (semi-convertible).

Volkswagen won’t actually confirm or deny whether this will make it to production but it will be positioned between the VW Tiguan and the upcoming VW Up! SUV. Volkswagen says that the T-Roc gives consumers a look at a possible future SUV from the brand. The vehicle can be seen as a possible competitor to the Nissan Juke and the upcoming all-new Jeep Renegade since they are pretty close in size with the T-Roc measuring in at 164.5-inches in length, 72.1-inches in width, and 59.1-inches tall.

Unlike the Juke or Renegade, the Volkswagen T-Roc will be a three-door, targa top design which allows seating for four passengers. I just hope Nissan and Jeep don’t respond with a convertible or targa top versions. On the VW T-Roc, the middle section of the roof consists of two halves which can be taken off with a few flicks and stowed away in the trunk.

The T-Roc will use the MQB platform and the vehicle will weigh in at 3,130 pounds (1,420kg) when eqipped with a 2.0-liter turbocharged diesel engine which will produce 181 horsepower. The power will be transferred via a 7sp twin-clutch DSG transmission and feature a 4MOTION all-wheel drive system. This isn’t meant to be a performance SUV but does a decent job with the 0-100km/h sprint being completed in 6.9 seconds and a max speed of 130mph. The T-Roc returns a fuel economy of 4.9 l/100km (48 mpg US) which is pretty good.

Since it’s a concept, no word on pricing but we do know the Volkswagen T-Roc will be equipped in three different driving modes: Off-road, Snow, and Street which alter the driving parameters of the 4MOTION drive train and its workings such as the gearbox, ABS, Hill Descent Control and Hill Start Assist.