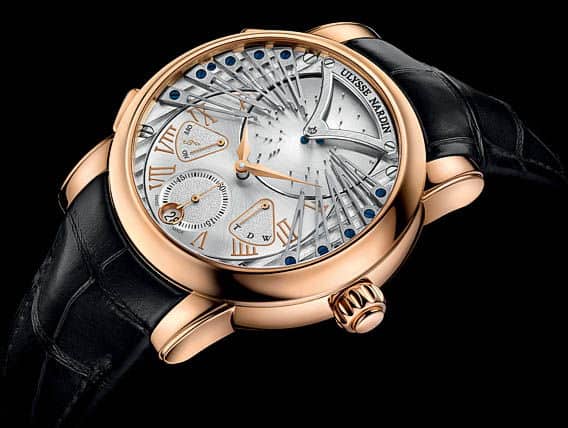 The Ulysse Nardin Stranger watch not only functions as a time telling device but it’s also able to play music, this watch is almost as useful as an iPod.  Unlike an iPod, unfortunately, the Stranger watch can only play one song, “Strangers in the Night” by Frank Sinatra.  The watch was in development for 5 years and was made in collaboration with musician Dieter Meier.

The music produced by the Stranger watch is more like the music made by a wind-up music box, rather than an actual song with words.  The watch comes with 10 blades pointing at a rotating disc which pings the blades to create music; this mechanism is displayed at the top of the dial.  Music boxes have similar mechanisms to create music but use barrels instead of discs.

The song is played at the top of the hour or on demand, with the push of a button located at the 10 o’clock position.  The same pusher is used to completely turn off the music, because no one wants to wake up to “Strangers in the Night” at 3 a.m.