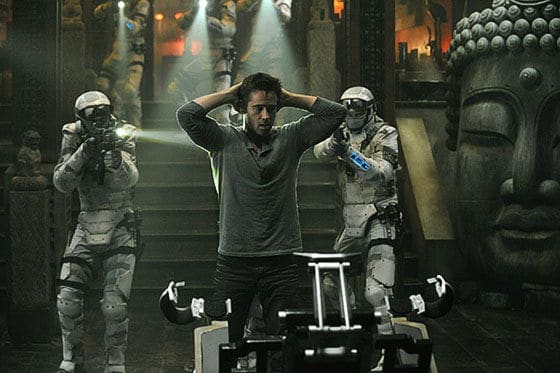 As anyone who knows me would attest, Total Recall is my absolute favorite movie of all time. I would explain why, but if you’ve seen the film, you would immediately understand. If you haven’t, well… you’re missing out. Unfortunately, us Total Recall fans now have a bit of a problem. Apparently someone decided it would be a good idea to re-make Total Recall, and starring Colin Farrell no less. Sadly, I don’t have a pukey face emoticon to post here, so you’ll have to use your imagination.

Both a promo image (seen above) and the synopsis were released, but I’m not going to share the synopsis with you. Hint:  it’s exactly the same as the original Total Recall.

Now, I realize how unfair it is to judge a film solely on a single picture, but I do have legitimate concerns – namely that the movie stars Colin Farrell. There’s also the fact that these security guards, or soldiers, or whatever the hell they are, look like they’re wearing paint-ball armor that’s been painted white. Obviously the original Total Recall was super serious and high budget, so this just won’t do!

The Total Recall re-make arrives August 3rd in theaters everywhere. May Vishnu have mercy on our souls.