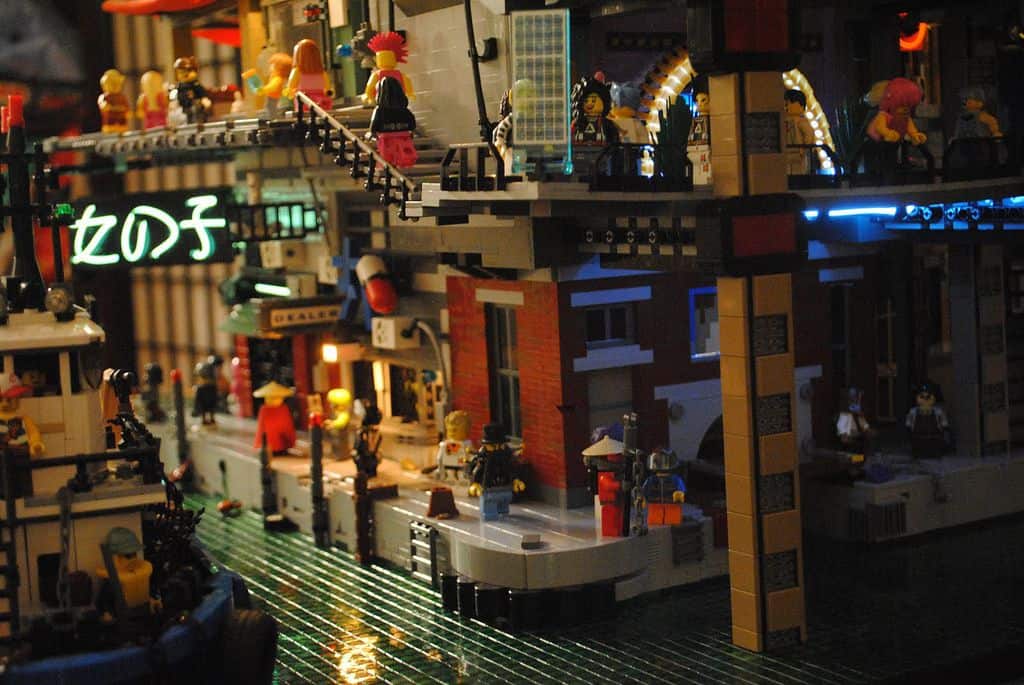 If you didn’t play with Lego as a child, there was probably something deeply wrong about you. That, or your parents didn’t realize how inexpensive the stuff was at places like The Works. I couldn’t get enough of these little blocks of joy.

There’s nothing quite like the freedom one experiences while building massive, completely implausible structures (or entire cities) entirely out of Lego while laying down on one’s play mat in the summer sun. If I could do it now without attracting too many funny looks, well… I would be flying out the door this very moment wearing a onesie, bucket of Lego in tow, ready to create a massive dystopian city lifted straight from the pages of Neuromancer. Sadly, a group of people at BrickFair 2013 beat me to the punch… as well as this city sets review from Wikilego.

I wrote about an awesome Fallout inspired Lego scene a few months ago, and as I type these words I’m beginning to realize that there’s a pattern arising from my choice of Lego art to post up here on Unfinished Man. Yes, there’s just something about a neon infused future that gets me going, and these guys certainly nailed it.

I hadn’t thought about this until now, but it’s kind of impressive that these guys worked in actual lighting into the signs and city-scape. Perhaps I’m behind the times here, but since when is Lego powered? That must be something new, or completely custom. Feel free to enlighten me.

Hey, I think I see my parents up there, circa 1982, heading out for a night on the town.

The tugboat is a really interesting touch. I didn’t realize the city was inundated by water like say, Venice, but it’s an excellent idea. Imagine what a futuristic Venice would be like, boats gently drifting past as you enjoy some Omegendorph with friends.

I’m afraid that’s it for now, but if you want to see this exhibit in person, you’ll actually be able to do so at BrickFair 2013 on August 3rd. I bet you’ll see a whole lot of other awesome models and scenes there as well.