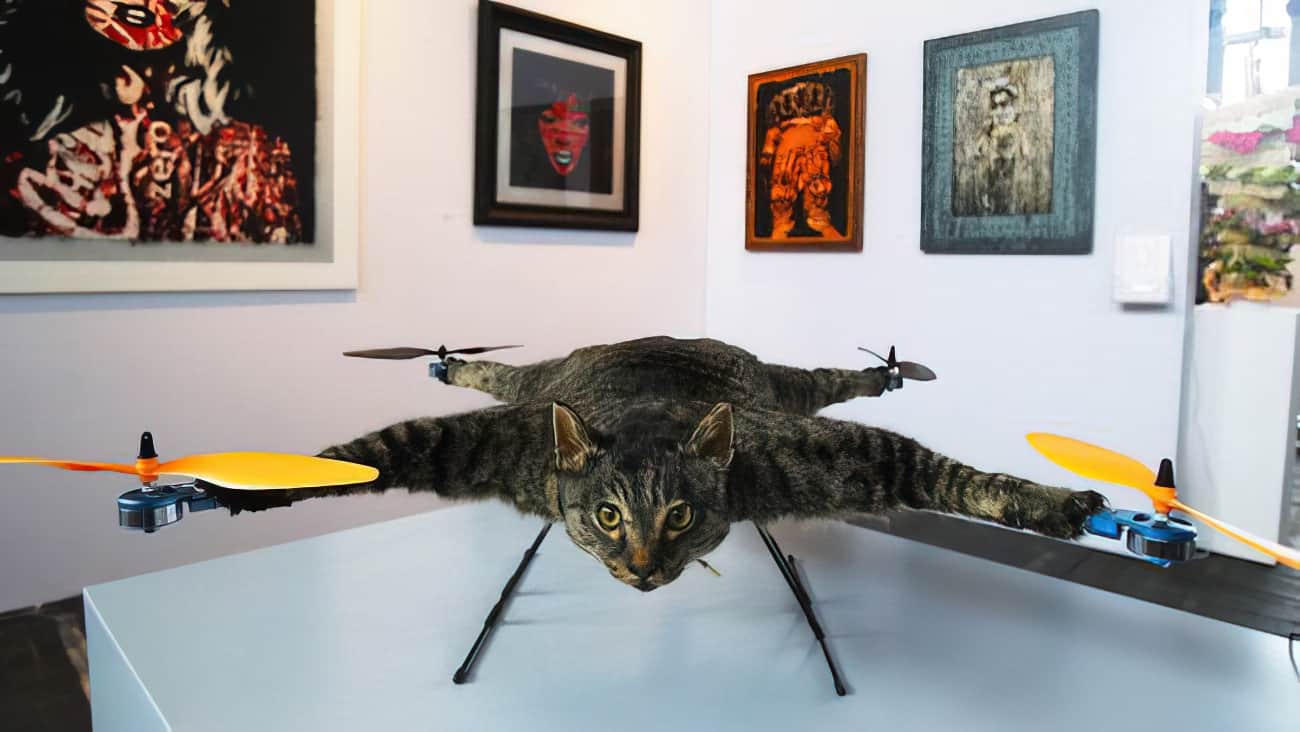 Quadrotors have led to the creation of some pretty hilarious videos and some pretty excellent ideas. Like magical four winged fairies, they hover about performing all manner of tasks, delighting anyone who has a pulse… until now, when Dutch artist Bart Jansen created the Orvillecopter, by deciding to clothe his quadrotor in the skin of his dead cat.

The whine of the motors are a terrifying mockery of the purrs and meows of a live animal, and Orville’s (named after Orville Wright, the aviator) glassy eyes stare transfixed at a horizon only he can see. Watch the Orvillecopter in action after the jump.

The Orvillecopter – Death From Above Now Has Claws and Whiskers

While most people’s immediate reaction when their beloved childhood pet perishes in a traffic motor vehicle incident is not to stuff and mechanize it, I applaud this man’s misguided attempt at keeping the memory of poor Orville alive by creating a whirring, clicking, swooping monster. In the future, this may open the door to hundreds of stuffed Fluffys and Fidos, fetching the paper in death just as they shredded it to pieces on the front porch in life.

Truthfully, while the Orvillecopter is hovering about European museums and touring art exhibits, I think the most useful and completely hilarious usage of the catacopter is in the video below: scaring the bejesus out of animals and people by diving at their faces. Really, how absolutely glee filled would you be if you could spend eternity with your beloved pet, chasing elderly women through the park and screeching out of dark corners at unsuspecting children?

Look, I realize that I find this and many other inappropriate things funny in a horrible way. You’ll get used to it. It’s the wonderful, absolutely nonsensical things like these that make the Internet such a great/awful place.

Bart Jansen’s other work is… different, but if you’re interested in seeing it, or more Orvillecopter information, you can check it out at his site (you’ll need to translate, though.) While this might seem bizarre and morbid, just remember that Orville Wright will live on, his whiskers in the wind as he roams the open air. It’s enough to melt the most stolid PETA activist’s heart… or stop it, when the Orvillecopter swoops in for the kill.