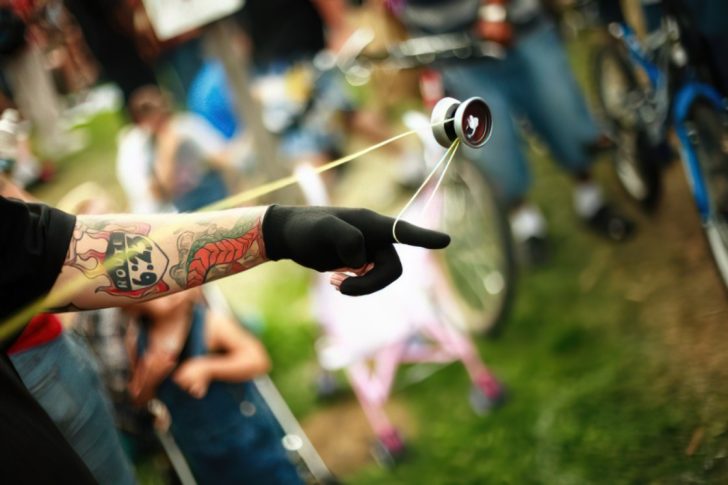 The Lost Art Of The Yo-Yo – Re-Kindling Childhood Abilities

I’m writing a post about yo-yos, you know… the spool on a string that you wound up and down as a kid. Actually, not really; on both counts. For one you were probably cool enough to realize that yo-yo’s are pretty dorky, and two, I’m not only going to write about yo-yos; I’ll save that for another post.

I recently spent some time on a much needed vacation to my country’s only desert. If you’re a fellow Vancouverite, you can probably empathize when I say that the rain was really getting to me, especially during a time that’s supposed to be summer. I’ll spare you the details of my time spent packing and the actual drive to get there, but suffice to say the drive was beautiful and it made me realize something interesting; it’s very easy to re-activate skills we pick up as a child, and some of them are even useful.

I spent many a recess playing with my yo-yo as an elementary school student. They were popular for a while but faded (like any fad) and made way for pogs, and Pokemon, and many other equally useless fads. 16 years later and I’m still able to use a yo-yo just fine. I lack some of the flourish I once had (or at least imagined I had) but can still hold my own, and this goes for a lot of other things I picked up as a child, such as climbing, drawing, and painting.

This may seem like one long vomit of wistful reminiscing, but consider this; are any of the skills you picked up as a child useful as an adult? A close friend of mine came back to his climbing and jumping as an adult and those skills have a name now — Parkour. He even makes money doing this as a full time teacher.

While my yo-yo skills haven’t made me a millionaire, they have made for entertainment during down time, and other things I spent countless hours doing as a child (such as drawing and painting) became very useful (and profitable) as an adult. My climbing found a place in adulthood as well and translated into my love of Parkour, which became a way for me to stay in shape for many years.

Think about the activities you spent your summers doing as a child and perhaps you too will re-activate some long forgotten abilities.