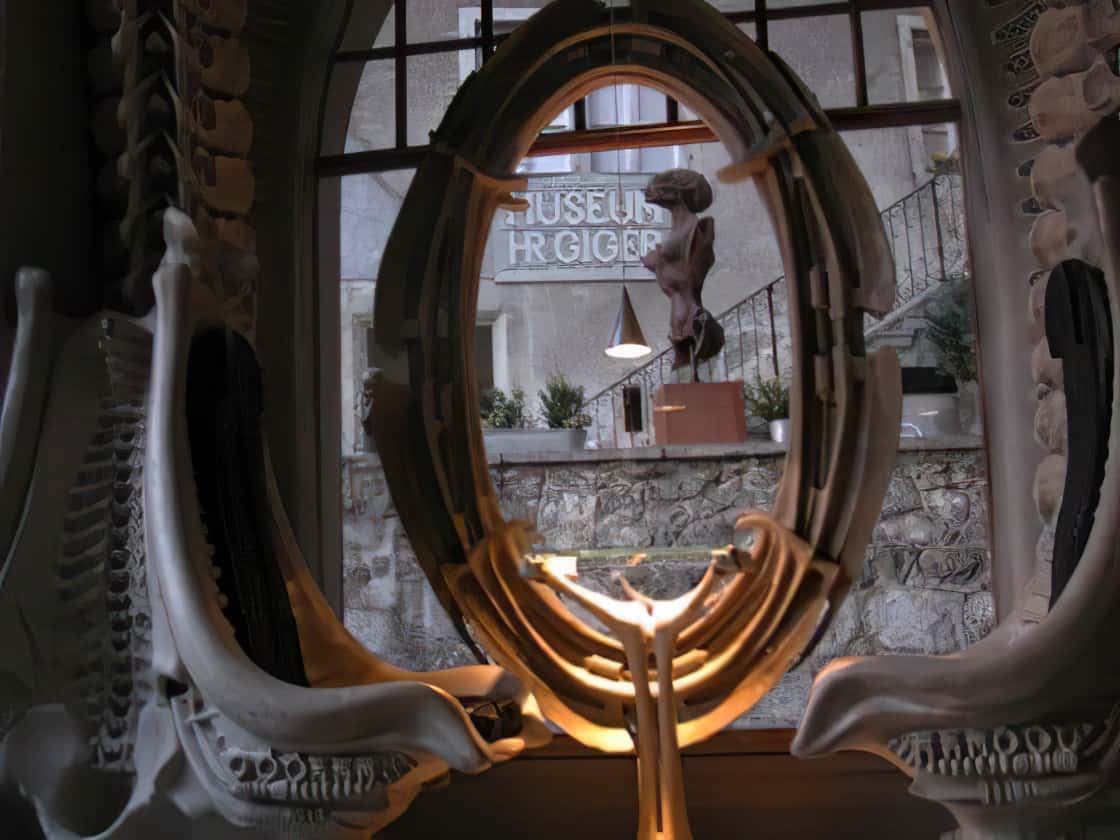 I’m a long time fan of the James Cameron directed Aliens films, and when I found out that H.R. Giger (Hans Rudolf “Ruedi” Giger) – the Swiss artist who envisioned the aliens and set pieces – had designed not only one bar, but four, I was and continue to be impressed. Honestly, who wouldn’t want to drink in a bar that looks like the inside of an alien spacecraft? I imagine that as the night progressed, and people drank more and more, it would become even stranger. Imagine lounging inside one of these Giger bars while drinking Absinthe? I can just imagine how that would mess with my head.

Below are a series of photos taken at the Giger Bar in Chur, Switzerland – Hans’ home-town. Hans opened this bar in 1992 after he realized that building a bar in New York City would just be too expensive. Construction took just over 2 years, and the bar opened on February 8th, 1992 – three days after his birthday.  He celebrated by standing ominously in the bar’s doorway for hours at a time. 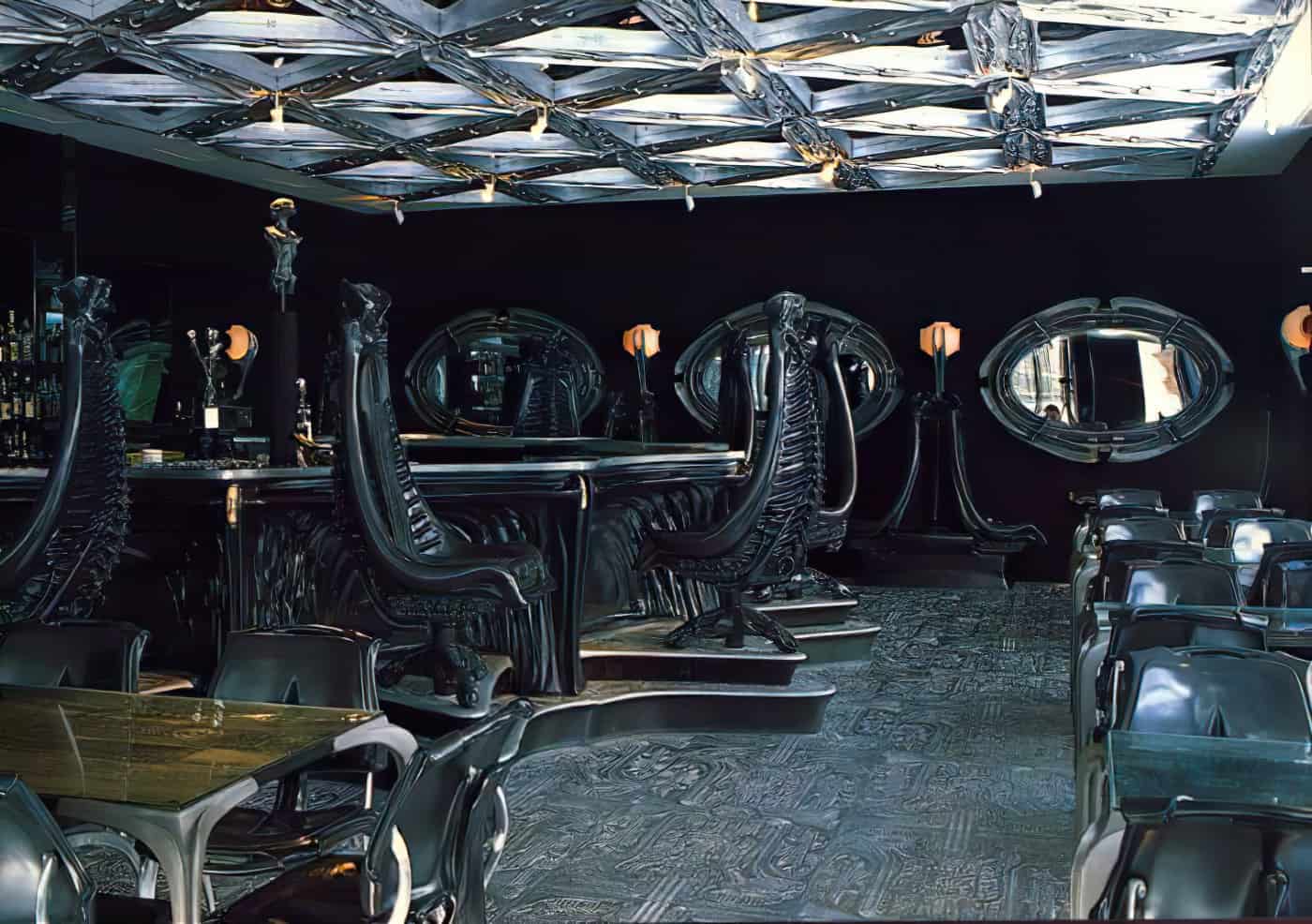 Imagine having an office space like this… the chairs, the strangely styled flooring – all of it would be absolutely amazing and make for a unique (and most likely depressing) work environment. I imagine bankers working in a place like this. 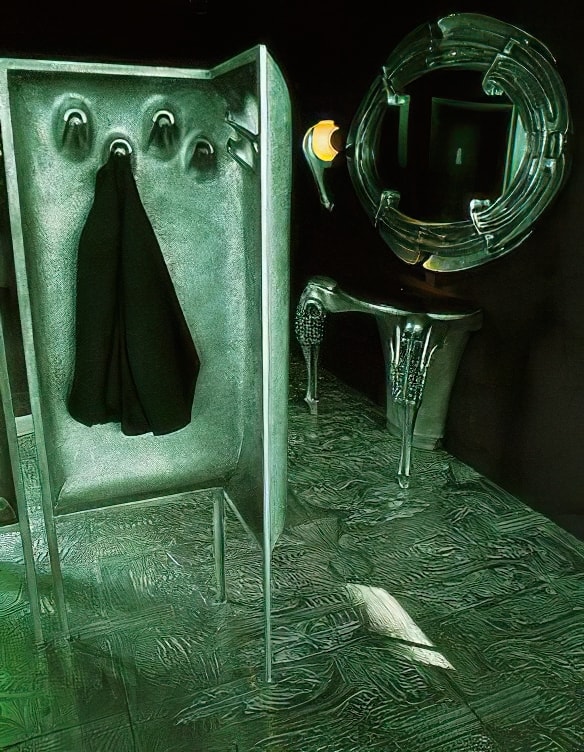 I can’t say for certain what this space is used for, but my guess is that it’s a bathroom. Not any old bathroom, but a space bathroom. You can tell by the cool coloured lighting that this bathroom is in space. Aliens and space marines alike have an aversion to happy lighting and bright colour-schemes. 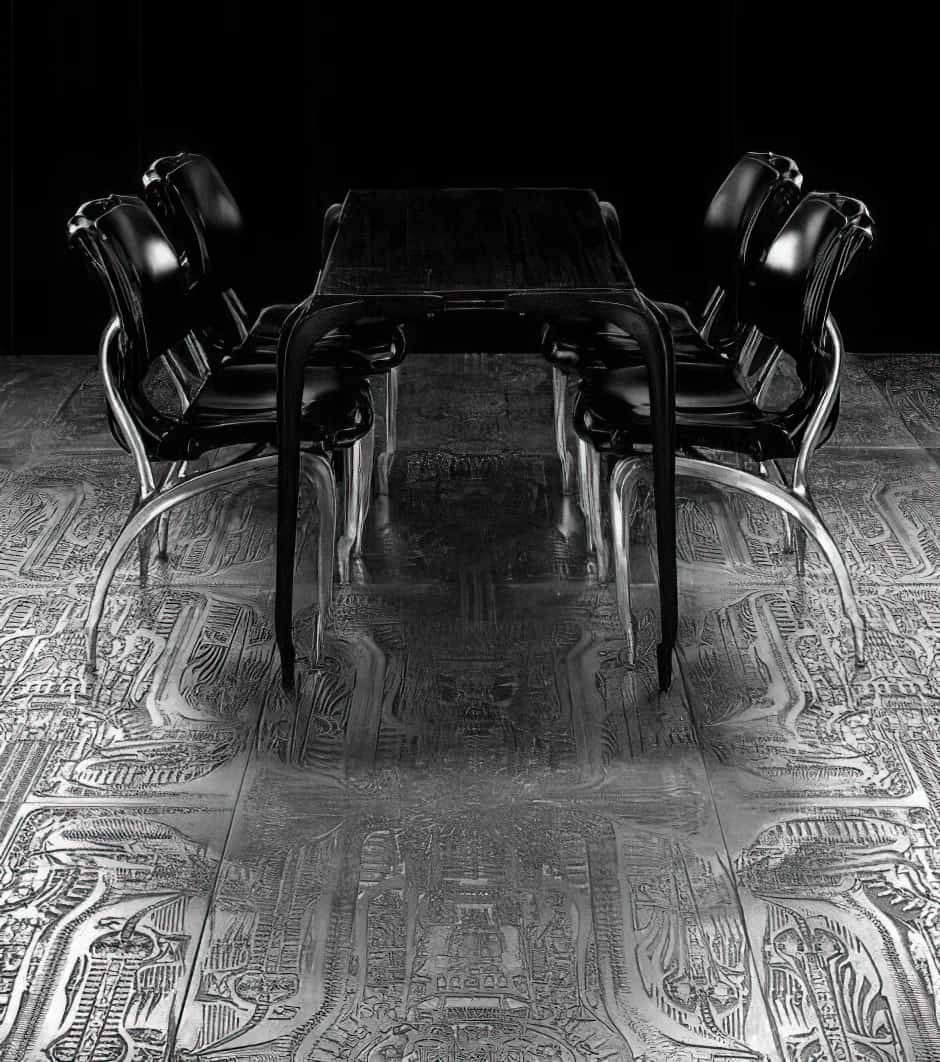 Here’s a typical table and chairs at the Bar. This is where Agent Smith interviewed Neo in the first Matrix movie. I think they must have shot that scene during the day, though. 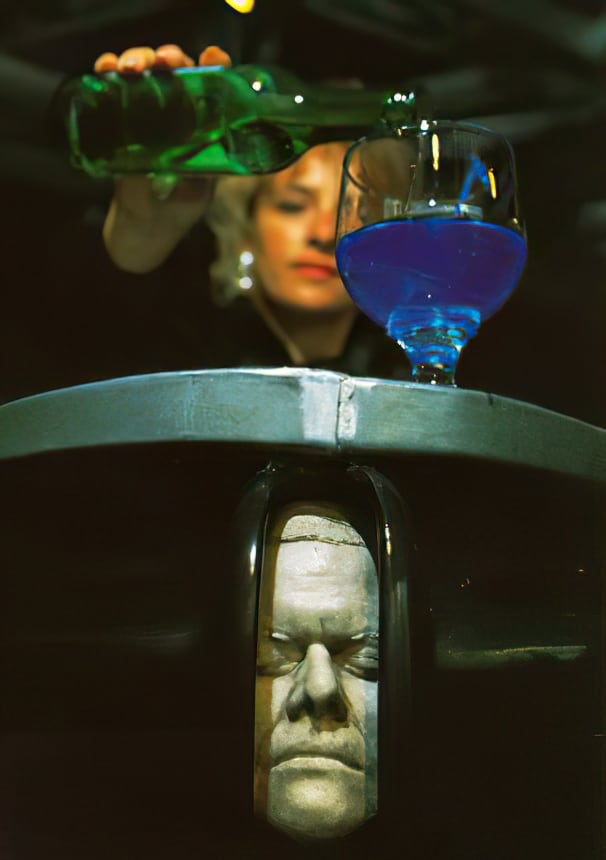 Hans likes being everywhere, and the underside of your table is no exception. Just imagine bumping your crotch up against his face every time you make your way towards the bathroom! 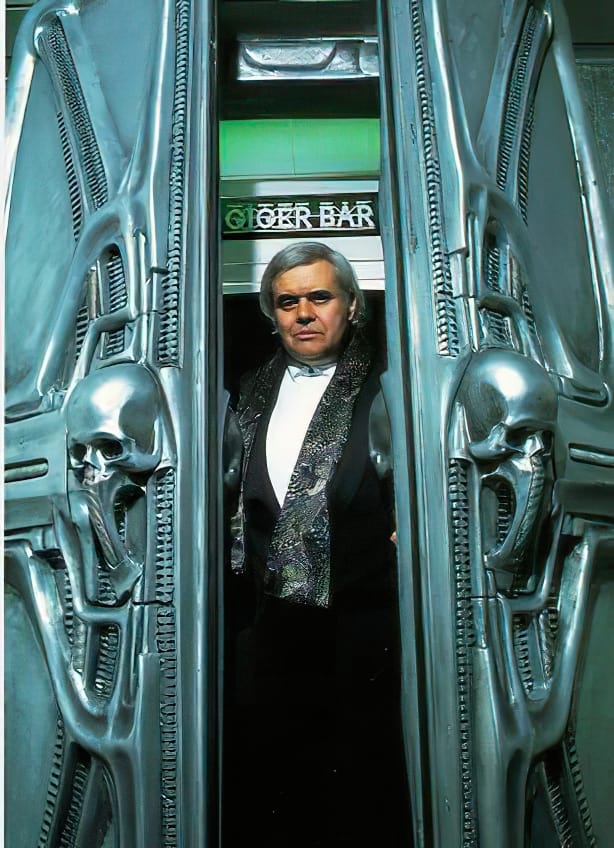 Here’s the man himself, and apparently he was trying to win a Anthony Hopkins look-alike contest in this photo.

Below is H.R. Giger’s second bar, the H.R. Giger Museum Bar in Château St. Germain, Gruyères, Switzerland. This second and – in my opinion – better looking bar, opened on April 12, 2003. As any fans of the Aliens series will note, this bar borrows a lot more visually from the Aliens universe than the bar in Chur. It looks like he pulled the black and dark brown colour palette directly from the film. The support beams and wall styling also look Alien inspired, mimicking the tails and spines of the Aliens themselves. 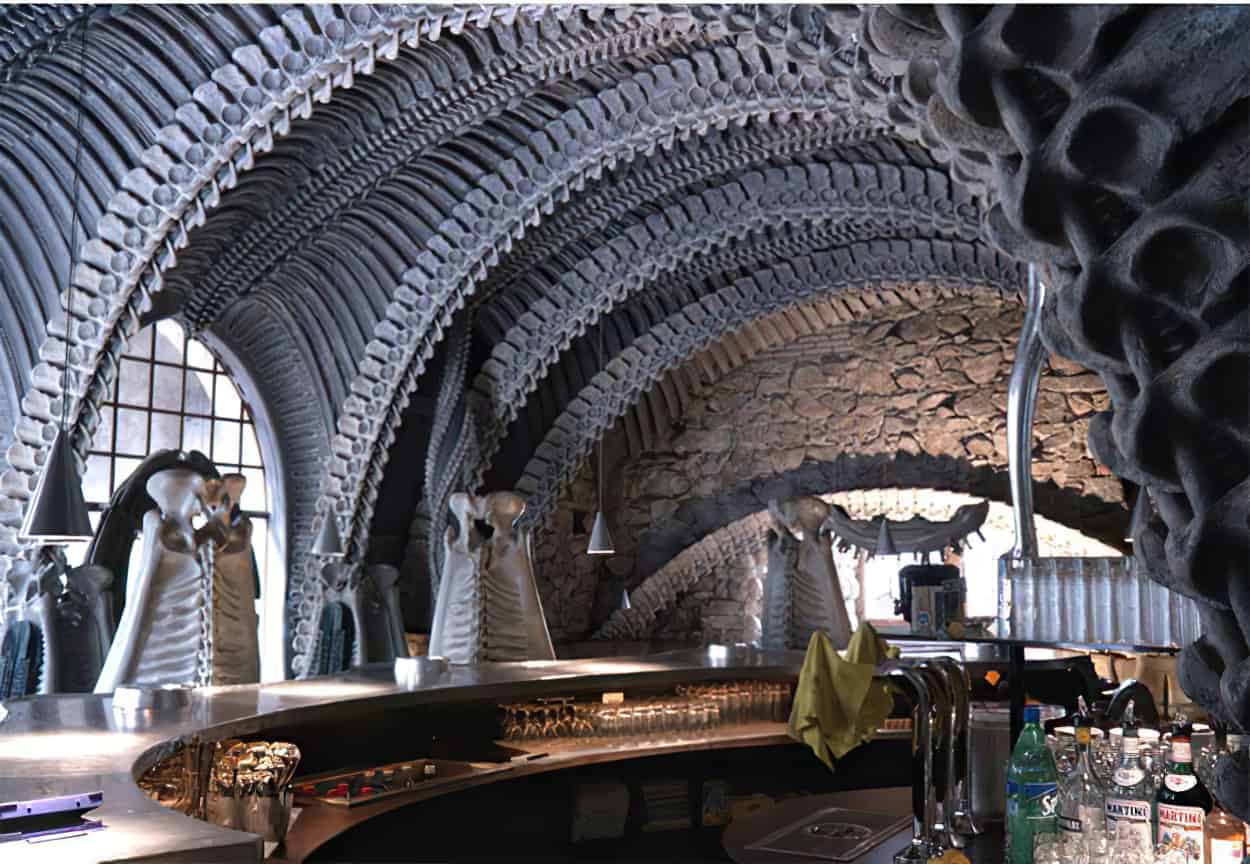 Now *this* is how I want the ceilings of my dream apartment to look. The combination of  “bone” and stone looks incredibly unique, and outside of his own bars, I doubt there are any venues that look even half as interesting as this. I also like the high-backed bar chairs; I think they would make a person feel very powerful sitting in them. 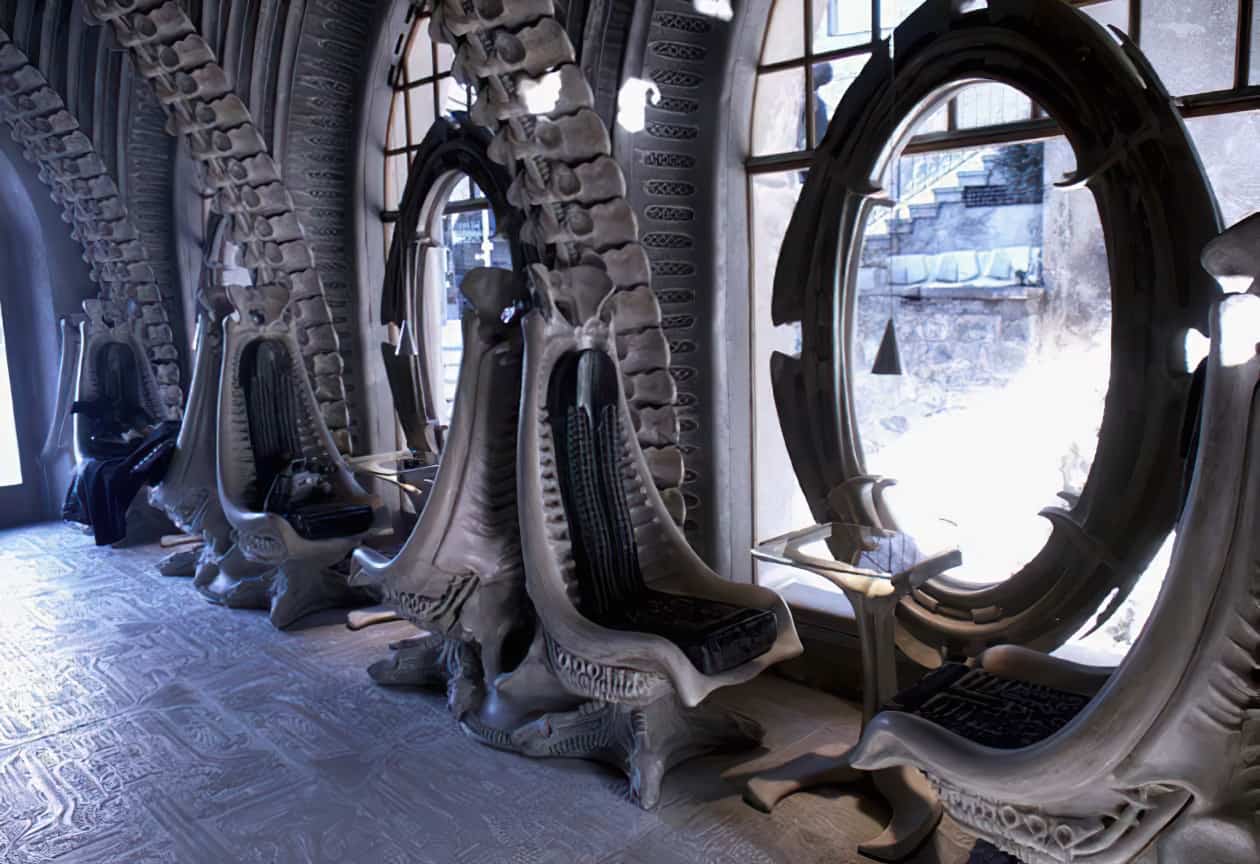 Here’s the window seating for the bar, and this looks like the perfect place to bring a date. Cozy seating in the carcass of dead aliens, and a great view to boot. What woman wouldn’t want to spend her evening in a place like this? 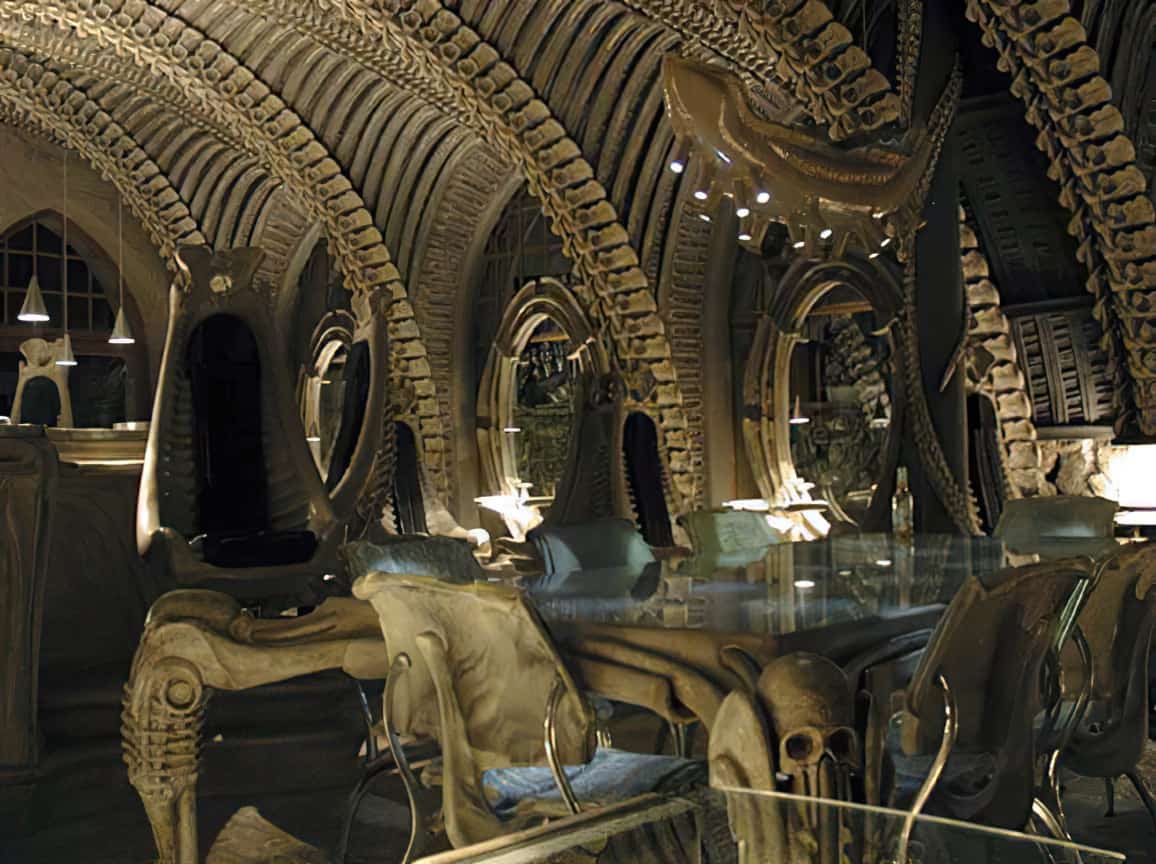 Ah, the tables… amazing. No creepy Hans face here, just lots and lots of skulls. I would rather brush up against these skulls than Hans’ creepy face.

This is the main bar area at night. I can just imagine the type of people who frequent this place. Perhaps the owner holds theme nights? I think it would be amazing to see a room full of aliens and space marines, though the massive alien tales would probably cause some chaos. I think I would be pretty pissed after having my drink knocked over by a persons gigantic tail. 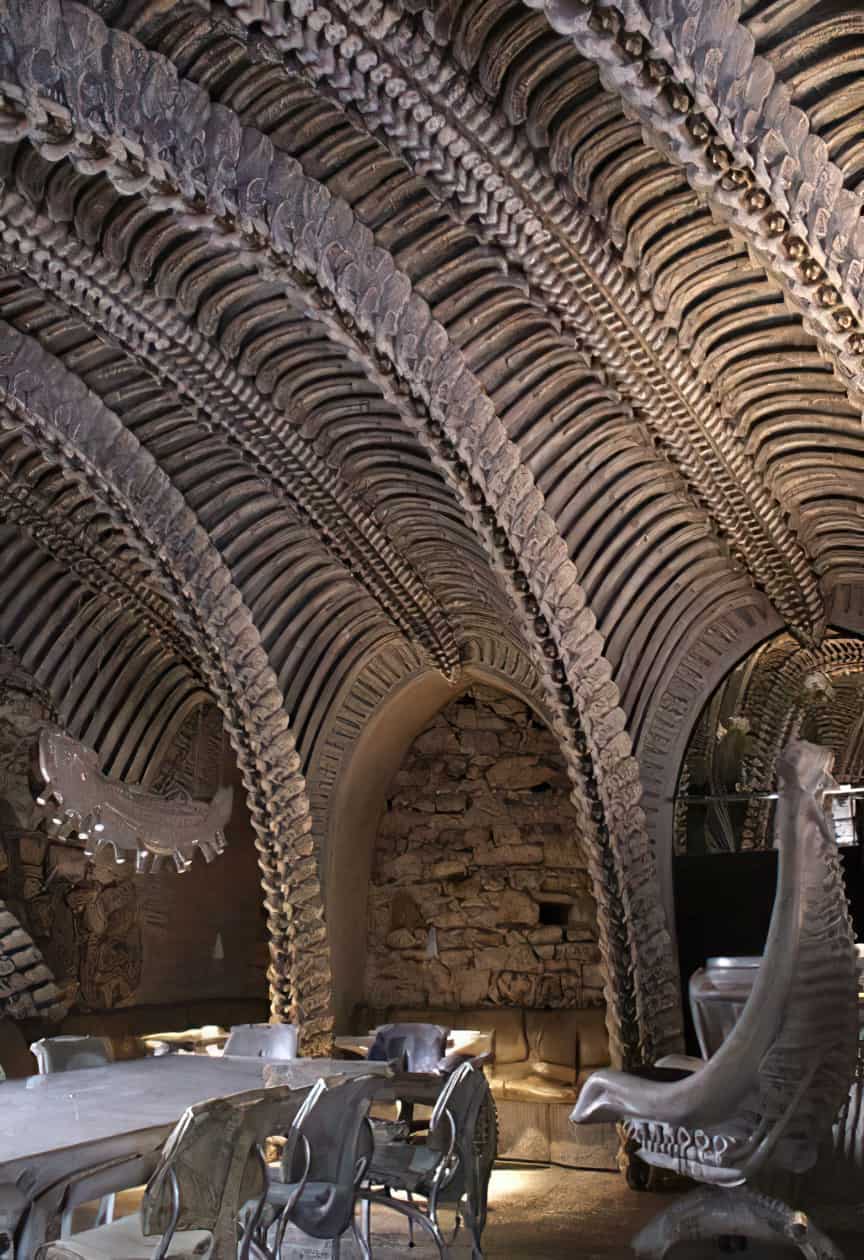 If you’re looking for an incredibly unique drinking experience and don’t mind the trek to Switzerland, you can find out more about the bars on their official websites. H.R. Giger Museum Bar and H.R. Giger Bar.

2 comments on “The H.R. Giger Bar – From Aliens to Alabama Slammers”