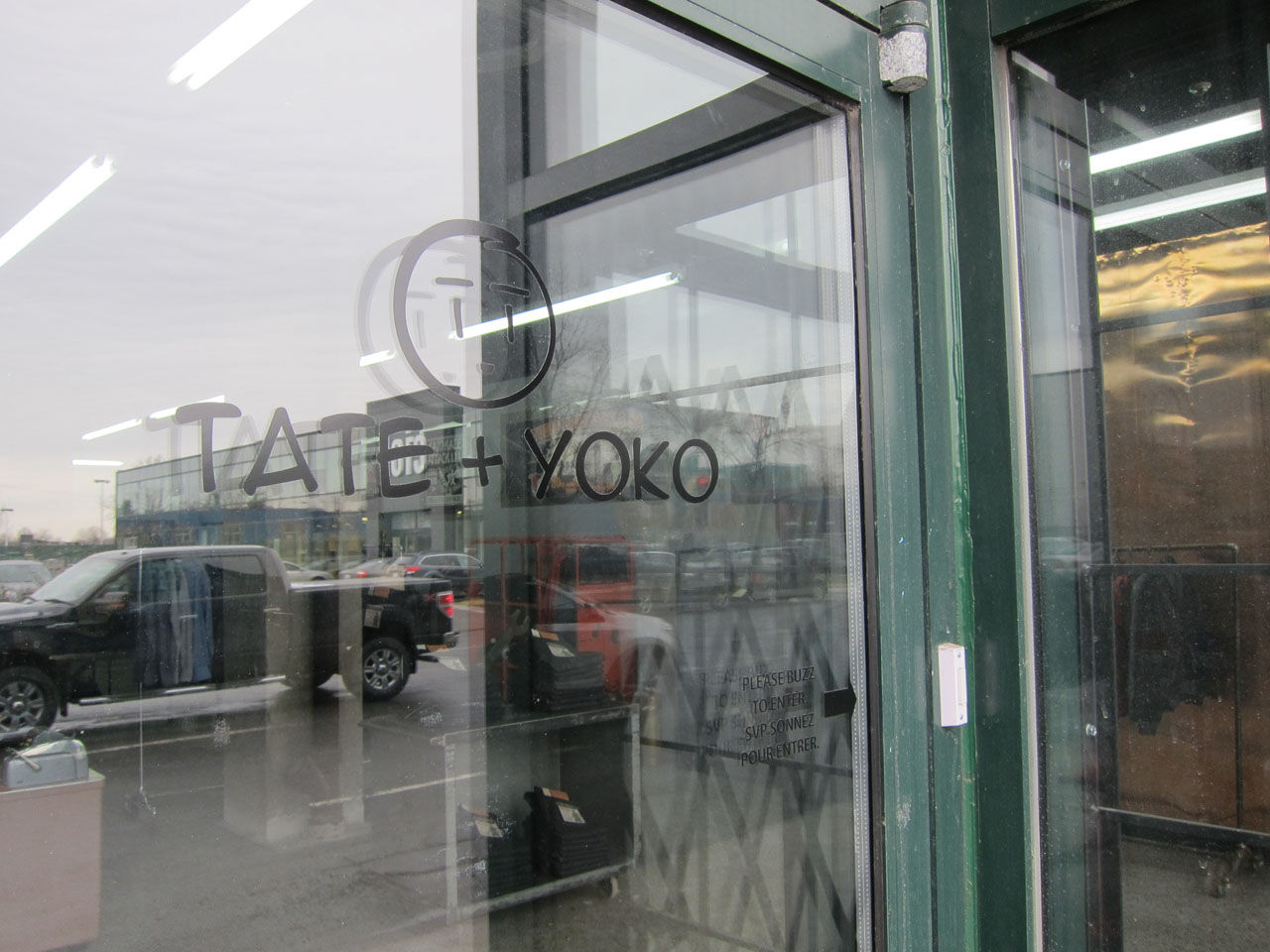 Tate + Yoko Montreal – From the Creator of Naked & Famous Denim

It’s 2:21 on a Wednesday, and I’m feeling the effects of a a very unusual Japanese rum. I’ve just finished a tour of the Naked & Famous Denim HQ here in beautiful Montreal, Canada, where owner and denim enthusiast Brandon Svarc agreed to show me around his warehouse, as well as his recently opened denim and clothing store, Tate + Yoko.

It’s at Tate + Yoko where my adventure begins. After that, we head to the warehouse of mystery, fun, and perhaps a little bit of friendship and karate for everyone. As you’ll quickly notice, I took a disgusting amount of photos. I’m a denim nerd through and through, and having the opportunity to spend so much time around a near mountain of denim was an almost holy experience for me.

Everything is metal here, because wood is for pussies

This is the store front of Tate + Yoko – Tate (ta-tay + yoo-koo) meaning “weft” and “waft”, which I’m hoping needs no explanation. See that funny little face over there? Well, that means something too. The face represents a Japanese children’s rhyme, which goes Tate Tate Yoko Yoko Maru-kaite Chon, which means Warp Warp Weft Weft, Draw a cirle, dot!

These are a few shots from the front and back of the store. In the back area, you can just make out the change rooms. As you can see, the place is rather large, and absolutely full of denim and other goodies. Just wait until you see the up-close-and-personal shots of all the jeans.

And here are the very awesome change rooms I just mentioned. The walls are completely plastered with Young Romance comic book pages that Brandon found stored away in a huge trunk. These comic lined walls are just one of the 40s and 50s inspired design elements that fill the entire Tate + Yoko store space.

Like I said, it was a bit of a holly experience for me. So… many… jeans.

Notice the lack of strings or anything else holding these jeans up? There’s a very good reason for that. These are some seriously heavy jeans, weighing in at a whopping 32 oz. I wonder if anyone has checked to see if these will stop a bullet?

These last two shots are of a collaborative effort between The Flat Head and Naked & Famous Denim. These jeans are limited run, and man are they awesome. If you’re still able to get your hands on a pair, I highly recommend it. If nothing else, get them for the sweet leather patch.

Remember how I said I would talk more about Brandon’s grandfather? This is him, Paul Svarc. Brandon revived the Paulrose name as a nod to his grandfathers legacy of producing quality garments. The Svarcs have been in the clothing business for over 60 years now. Paul is Brandon’s grandfather, and Rose is his grandmother… thus the name Paulrose Products was born. When I show you pictures of Brandon a little later, I think you’ll see the resemblance between the two.

Brandon’s grandfather’s company is named Beaumarche, a company which still exists to this day.

The branding is so incredible different from Brandon’s Naked & Famous line of denim. The hot blonde bombshell has been replaced with a far more traditional styling, one that gives me a real war-time vibe.

I haven’t had a chance to put these through their paces, but they certainly felt heavy duty.

In addition to carrying his own Naked & Famous line of jeans, Brandon carries a ton of other lines such as The Flat Head, Studio D’Artisan, and exclusive brands such as Kamikaze Attack.

Call me crazy, but I love the shit out of this little guy. It’s a boy… with weird hair… coming out of a peach! Though I love denim, it’s probably for the best that I didn’t pop out wearing a freshly starched pair of jeans. I don’t think my mother would have been particularly impressed.

As I concluded my tour of Tate + Yoko, Brandon showed me a bottle of a very peculiar looking drink. At first I thought it was some kind of tea, but it turns out that it was anything but.

Rat poison? No, sadly rat poison probably would have tasted better. This is Japanese rum called Habu Shu, with something special at the bottom of the bottle. I’ll give you a hint… they eat rats and mice.

Yes, there’s a snake wedged in there. This delicious reptile certainly adds a certain something to the flavour. Not exactly a good something, though. No, it was really quite the opposite. This rum tasted like what I can only describe as rubbing alcohol mixed with rat poison and a few spices for the hell of it. Before Brandon comes in here and says anything, yes… I did agree to drink this. Why? I have no idea. Perhaps I’m just a sucker for punishment.

A Tour of the Warehouse?

This is probably the point where you’re going to get angry with me. You see, I had initially planned to write all about the warehouse and its awesome Union Special machine, but alas, I just had too many photos. After trying to cram all of them into one mega-post, I realize that the article would be quite the chore to read. Instead, I’ve decided to split my experience into two separate articles. The one you’ve probably just read through, and the the next one focusing on the warehouse. Please don’t cry, and I promise to update this page with a link to the second article the moment I finish it. For the moment, here… look at this naked woman!

Though I only spent a very brief time with Brandon, he’s one of the most sincerely enthusiastic people I’ve ever met. You may not know this, but I actually interviewed Brandon years ago, and it was nice to finally meet him face to face. He knows a lot about denim, and he’s able to convey that knowledge in an informative and often charming manner. Brandon, thanks for everything.