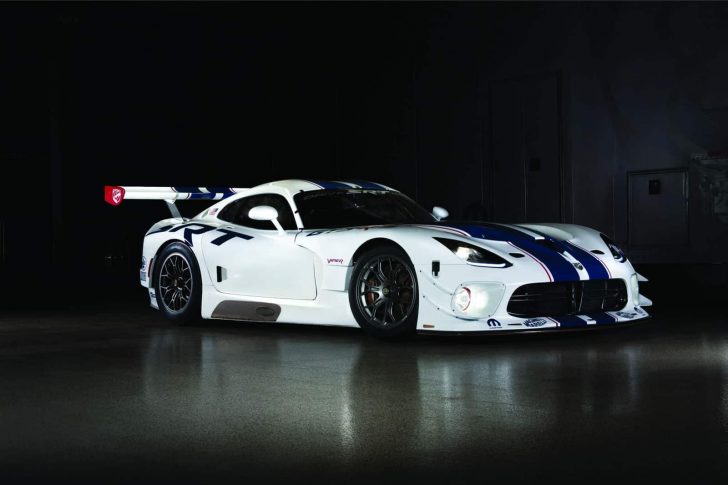 When it comes to the Dodge Viper, I was a fan of the earlier generations but as the car evolved, I lost interest in the vehicle. The design of the Viper became so bland, plain, and god damn boring. The only interesting thing about it was the thunderous V10 engine. When it was announced last year that the snake would make a return as the SRT Viper, a few of us here at Unfinished Man were pretty excited about it. The styling, the performance, and the overall look of the vehicle is very appealing.

And those who are true Viper fans are also likely to be fans to the Le Mans Viper GTS-R which has kicked some major ass in the past in its class. I’m sure the hardcore fans would love to own the Viper GTS-R but of course that’s not an option. But the SRT Viper GT3-R is an available option for those with deep pockets.

The same technology and vigorous testing that goes into the Le Mans Viper GTS-R is also incorporated into the SRT Viper GT3-R in areas such as development of the engine, electronics, chassis & suspension, and aerodynamics. And speaking of aerodynamics, the GT3-R isn’t your average looking SRT Viper (which is already a sexy beast). No, this one is guaranteed to turn heads should you drive across town to the grocery store.

The aerodynamics package includes major changes to the bumpers, side skirts, and a massive rear spoiler. The SRT Viper GT3-R also features a Xtrac six-speed sequential gearbox with paddle shifters, six-piston brake calipers up front, and four-piston in the rear. The Viper also features a multi-disc race clutch and ultralight racing wheels.

At a staggering cost of $459,000, the power enhancements don’t appear to be all that appealing. But it’s not just about increased power. The driving dynamics of the vehicle have been changed and weight of the vehicle has been reduced to create a true Le Mans style racer. You will have to wait until end of 2013 to receive your vehicle.