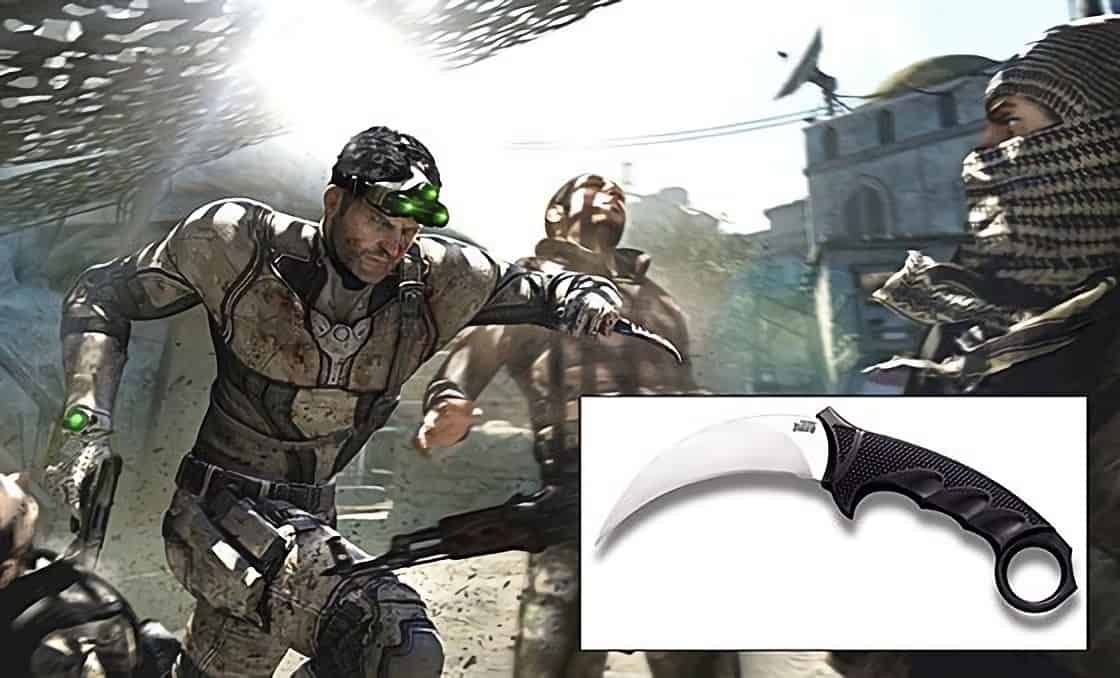 Though I wouldn’t exactly call the Splinter Cell franchise realistic, with its sonar goggles, and Sam Fisher’s uncanny ability to decimate entire legions of enemy soldiers, it is evident that Ubisoft Toronto has done their homework in the weapons department for their latest game, Splinter Cell: Blacklist. Take, for example, Sam Fisher’s Karambit knife…

Gone is Sam’s drop point combat knife, and in its place, he’s now wielding a brand new hooked blade Karambit. Don’t feel too bad if you haven’t heard of it before. It’s not exactly the knife you would use to say, open your mail, or cut down a cardboard box. No, the Karambit is designed for one thing, and one thing only: killing people.

Originally designed as an agricultural tool, the Karambit (or Kerambit) was quickly weaponized, with the hook becoming more prominent. Today, the fixed blade variant often looks like this one from knife manufacturer Cold Steel.

Now, I’ll spare you a further history lesson, as sites like this have a far more detailed account of the Karambit’s evolution. Instead, I pose the following question: why did Ubisoft decide to go with a hooked knife instead of a drop or chisel point blade? Though I’ll fully admit that I’m not a knife fighter by any stretch of the imagination, straight edges have always seemed more practical to me. The curvature of the Karambit makes it better suited to a reverse knife grip, and from my understanding, there’s a lot less power and reach in that type of motion. If I’m wrong, feel free to reach out in the comments below. It may look cool, but would a real-life Sam Fisher use a karambit? Third Echelon issues these knives, but the real-life military certainly doesn’t.

In a recent Splinter Cell: Blacklist video, we saw protagonist Sam Fisher – who is, sadly, no longer voiced by Michael Ironside – taking down enemies in a wide range of stabby ways. Though I’m guessing Ubisoft won’t implement *all* of the martial arts techniques possible with this type of knife, this video should give you a pretty good idea of what they look like being carried out in real life. I apologize for the lack of English in the video. This is what’s available.

I always find it interesting to research where development studios draw inspiration from, and I feel that military games will continue to become more violent and feature more realistic fighting techniques and equipment.

In Splinter Cell: Conviction, Ubisoft introduced many to Krav Maga, a “little known” martial art, and Center Axis Relock – a shooting system that works with a shooter’s instinct to draw inwards. These are both real-world examples of particular fighting techniques. In addition, the level of violence in Splinter Cell: Conviction is… a little bit disturbing. I love shooters of every sort, but seeing a mini-game that centers around digging a knife in a person’s shoulder? It’s a bit much for me, and I’ll be interested to see if my predictions are correct.

Since I wrote this article so many years ago, I’ve gotten a lot of questions about Sam Fisher’s Karambit. I thought it would be helpful to answer some of the most common ones here:

What is a Karambit Knife?

The Karambit is a small, curved knife that originated in Indonesia. It is designed to be used as a tool for self-defense and close-quarters combat. The blade is usually less than four inches long and is incredibly sharp. The knife’s handle is also curved, allowing a more comfortable grip and making it easier to conceal the blade on your person.

The Karambit is also unique because it can be used with either one hand or two. When using it with one hand, the blade is held between the index finger and thumb and protrudes from the bottom of the fist. This allows for a very tight grip and makes it difficult for an opponent to disarm you. When using the Karambit with two hands, the blade is held in a reverse grip and is used more like a dagger.

What are the Advantages of the Karambit?

The main advantage of the Karambit is its versatility. It can be used for everything from self-defense, to cutting through rope, to opening cans. It is also a very efficient killing tool. The blade is designed to puncture, and the curved handle makes it easy to slash an opponent’s throat.

The Karambit is also incredibly easy to conceal. The small size of the knife means that it can be hidden almost anywhere on your body, and the curved handle makes it easy to grip, even with gloves on.

The Disadvantages of the Karambit

The main disadvantage of the Karambit is its limited range. The blade is only four inches long, less effective than a sword or dagger in a fight. It is also more challenging to thrust the knife into an opponent’s body, as the blade is not designed for that purpose.

The other disadvantage of the Karambit is its lack of a guard. This means your hand is more exposed to being cut, which can be a severe problem in a close-quarters fight.

Did the latest Splinter Cell video games use the karambit as well?

Sadly, there haven’t been any new games in the series since Splinter Cell: Blacklist. Gamers thought the game was pretty bad, and unfortunately, Ubisoft neglected to go back and create something more similar to Chaos Theory, the very best game in the series.

Double Agent wasn’t perfect either. It seems like Chaos Theory was pretty much the only good Splinter Cell game.

Why More Men Are Looking To Date Trans Women