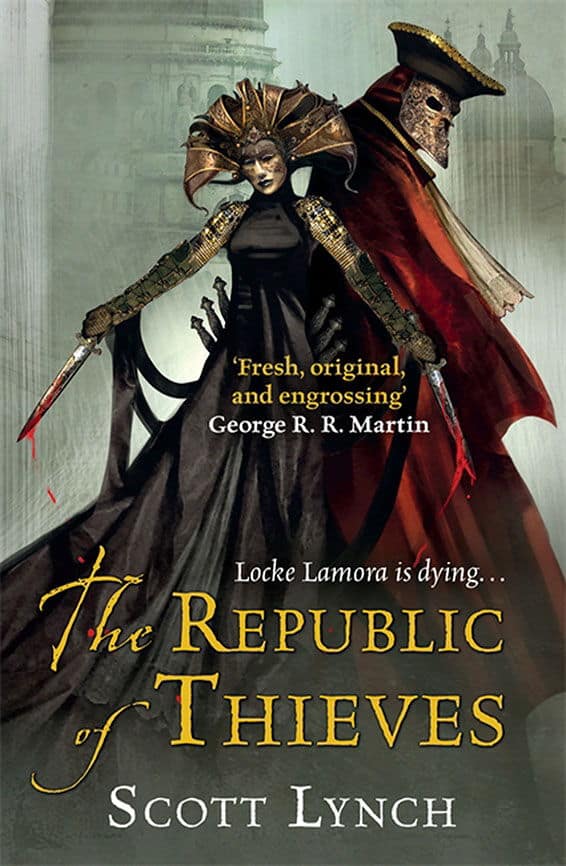 I’ve got to tell you, there’s nothing I hate quite as much as depression.

It’s not that I’m depressed (I love myself far too much for that), but that on occasion other people get depressed. Great people even… people like Scott Lynch.

You see, a few years ago Mr. Lynch wrote a lovely book called The Lies of Locke Lamora. It’s a story about a young boy’s transformation from flee ridden mongrel to talented thief and loveable scoundrel. It’s one of my absolute favorite books, and thankfully Lynch went on to write a second book – Red Seas Under Red Skies – right before becoming cripplingly depressed. That was years ago, and I’ve been waiting patiently ever since for another of his fantastic Gentleman Bastards books.

There’s a saying that time heals all wounds, and if that fails, well… there’s always anti-depressants and therapy. I don’t know how Scott Lynch did it, but he seems to have not only grappled his depression, but also created a book that – dare I say – is even better than The Lies of Locke Lamora, which was already pretty fuckin’ amazing.

For those of you that haven’t read the first two Gentleman Bastards books, get on that immediately. Following the adventures of Locke Lamora and his merry band of thieves through the streets of Camorr is an exciting adventure that I just can’t get enough of. Imagine the grittiness and depth of a George R.R. Martin novel, mixed the witty banter of the Sherlock Holmes movies. That doesn’t do the series justice, but it should give you a half decent idea.

Now, you may have noticed that I haven’t said a whole lot about this particular book. You’re right, I’ve been stalling a bit. The reason is that, if you haven’t read the previous ones, I really want to get you excited enough to actually get off your ass and pick up a copy. Did I mention they’re very good? But for the rest of you, read on…

The Republic of Thieves

Perhaps you’ll disagree with me here, but I found Red Seas Under Red Skies pretty disappointing. I don’t know what it was, but the whole book felt rather, well… depressing. It seemed to suffer from “middle book syndrome”, and though I was excited to read another one, my excitement didn’t match my feelings after finishing the first book. Republic of Thieves isn’t like that.

Scott has taken all the parts that made the first book so great – like witty dialogue and extremely creative, far fetched ploys – and increased that by about 352%. While I was reading this, I realized that a person actually could call a book a page turner without it being a giant cliché. This is one such book.

Locke is dying, and Jean is desperately trying to save his life. Every remedy they’ve tried has failed, and Jean is starting to give up hope. Can anyone help them? Maybe, but it’s going to cost Locke a pretty penny.