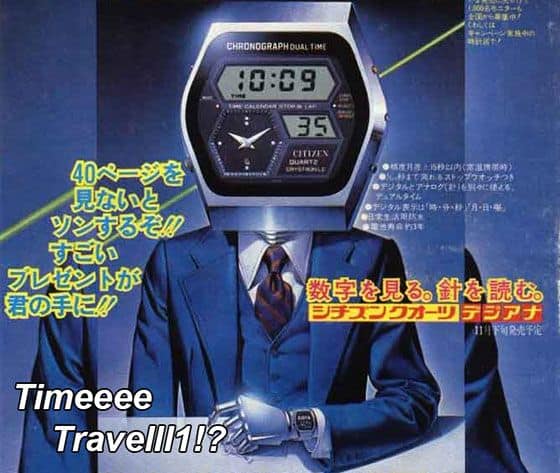 I’m not usually the one who writes about watches, because frankly… I think they’re mostly useless these days. I have my cell phone, thank you very much. Having said that, I absolutely love seeing old advertising, especially if it’s created by the Japanese.

I’m sure we can all agree that Japan is a place full of wacky antics, and even crazier gadgets, and this set of old-school Japanese watch advertisements pretty well covers both those areas. I admit, that the Seiko and Citizen watches are pretty typical, but what about the robots and women with bowl-cuts that are wearing them? 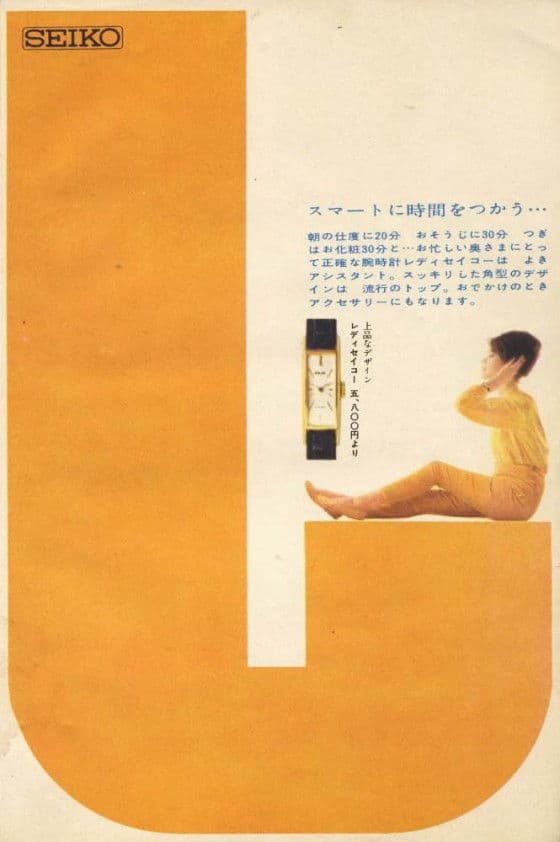 We start out pretty simple here, with a very yellow woman (I’m not being racist!) sitting on a giant J… a hideous slender watch floating idly above her. 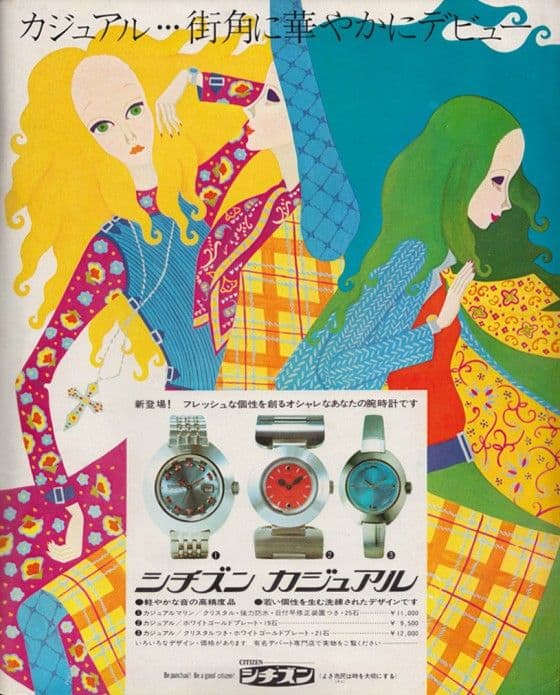 Then we have… oh my god, what is wrong with their faces? They look like possessed mannequins… mannequins promoting unbelievably ugly gem-stone colored watches. Can you believe it that people actually wore these monstrosities? 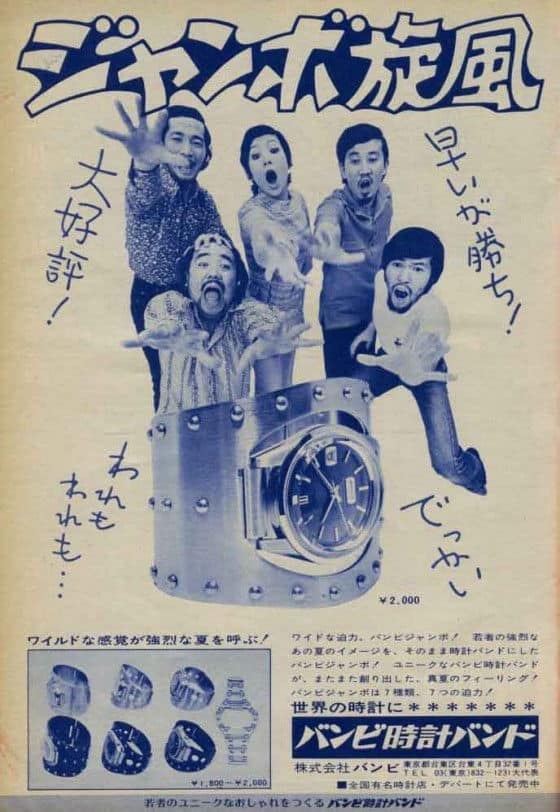 “Nooooo, don’t buy it!” they scream out, and I would have to agree. Unless I want my wrist to look like a piece of a boiler, or the hatch of a submarine, I think I’ll have to take a pass on this one. 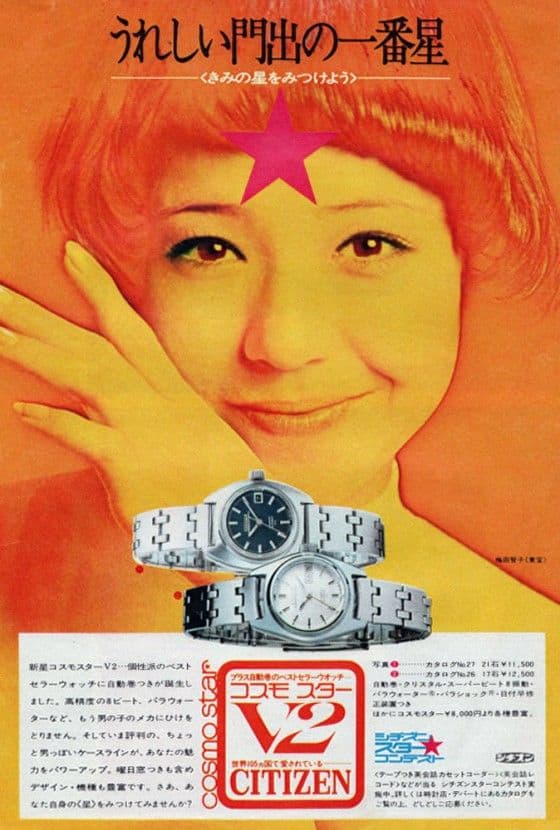 These Citizen watches actually look relatively normal, though the person levitating them in front of her does not. Is the giant pink star on her forehead a part of the company logo, or was that simply an act of desperation to make this advertisement more interesting? 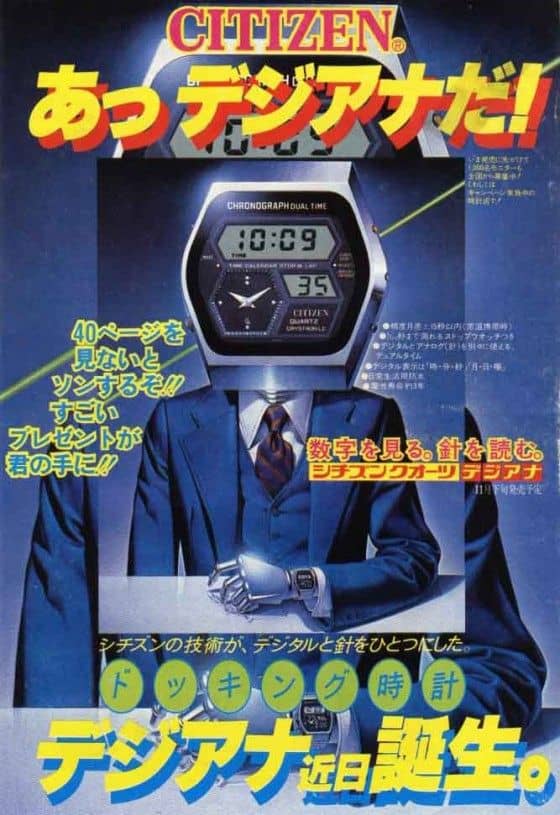 Okay, now this… is awesome. It’s a fuckin’ robot… wearing a watch, that looks like his face! This just screams meta, and if you look not so carefully, you’ll see there’s yet another shot of the robot behind the robot in front! That’s some real Lost shit right there. 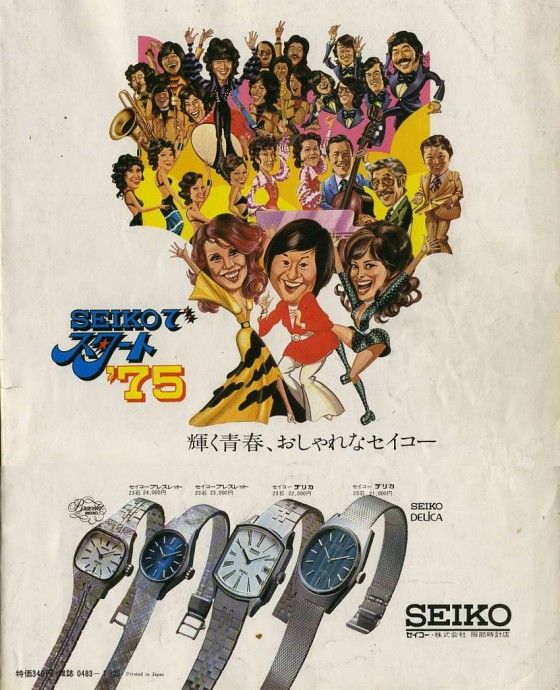 Tiny people, making very tiny little ugly watches. At the very least, they all seem happy to be doing whatever it is their doing… some sort of watch related festival and dance routine from the looks of things. I’m sure the laughing gas helped with that.

Though these adverts are a little bit hokey, and perhaps even a bit crazy, they’ve got nothing on the products coming out of modern day Japan. Though Japanese manufacturers still produce a ton of amazing goods (such as jeans), they all create and manufacture a ton of really insane stuff, especially when it comes to robots. The distinct lack of tentacles and eels in these adverts is really kind of refreshing.

If you’re interested in seeing more vintage Japanese advertising, well… let me save you some trouble. Nerdcore has posted a whole bunch of them up on Flickr, and if you liked the small selection I shared with you here, then you’ll be blown away by what you’ll see in a moment. Hint: That person who looks like a man in the thumbnail… yeah, they’re actually not.