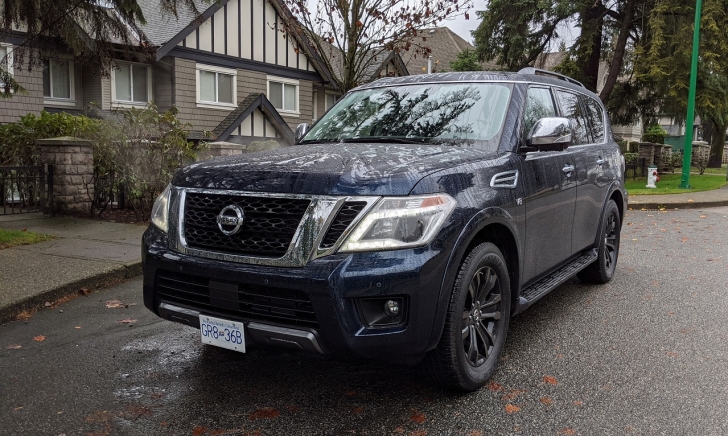 The Nissan Armada is one of a handful of body-on-frame, old school vehicles you can still buy, and it comes with a good old fashioned V8 engine. The V8 engine and body-on-frame is a dying breed, who knows how long the Armada and similar vehicles like it will be offered.

The Nissan Armada has been on sales since the 2004 model year, the current generation Armada is only the second generation of this SUV, which went on sale in 2016 as a 2017 model year. The first-generation Armada was based on the Nissan Titan truck chassis, while the second-generation Armada is based on the Nissan Patrol, a vehicle I’m familiar with thanks to time spent in Asia in an earlier part of my life. As children, we thought the old Nissan Patrol was one of the coolest looking vehicles on the road, I still think it’s pretty cool. I saw quite a few versions of it back in the day, I’m not sure if those were stock or had work done to them, versions with high roofs and extremely wide fender flares were our favorites; those vehicles have a special place in my heart.

The Nissan Patrol is a much older nameplate than the Armada, starting life way back in 1951.

Although a lot has changed on the Armada/Patrol since my childhood, at the heart is still an old school truck-based SUV. Last week I had the chance to spend some quality time behind the wheel of a 2020 Nissan Armada Platinum.

Our review car for the week was the 2020 Nissan Armada Platinum Captain’s Chairs, with a price tag of $73,198 plus Freight & PDE of $1,950. The only option on our review vehicle was the $300 3-coat pearl paint. Other than paint, there are no additional packages/options available on each of the trims.

If you’re looking for a more luxurious version of the Armada, the QX80 is available from Nissan’s luxury brand Infiniti.

Fuel consumption… well that’s a hard one to swallow. The 2020 Nissan Armada is rated at 17.7/12.9 liter/100 kilometers in city/highway driving. On our weeklong review, the onboard computer showed 20.0/13.1 L/100 km in city/highway driving. I think this is thirstiest vehicle I’ve reviewed in the 6+ years I’ve been reviewing cars. I do most of my driving in the city, so it was quite painful to see the dollar number going up and up while I was filling it up, before returning it to Nissan.

The 2020 Nissan Armada drives just as you’d expect a big SUV like this to drive; it drives like a big floating couch, which is great for soaking up bumpy roads and even better for going off the beaten path. I personally enjoyed the way the Armada drove, it has a truck-like ride but isn’t bumpy like some of the older trucks, thanks to its weight distribution, unlike a truck which has most of the weight at the front.

The V8 engine has more than enough power to get this heavy SUV up to highway speeds and city driving is a breeze. The transmission is smooth, although I would’ve liked it to upshift much sooner than it did, which would’ve saved some fuel. A vehicle like the Armada is great for long highway driving, where it’s decently fuel efficient, considering the size of this thing. The Armada would also be perfect for taking off-road, just not on tight trails because of its size. However, it will be very comfortable on any type of terrain, thanks to its soft suspension.

The 2020 Nissan Armada comes with a few driving modes, nothing like modern vehicles, but there are some options. The rotary dial below the gear lever lets you select between Auto, 4H (4 high), and 4L (4 low), with a button for “Snow” and “Tow Mode”. Since I didn’t take it off road, I just left it in the auto mode.

Driving on city streets, I did feel like king of the road, I just had to be careful not to squish some of the little cars. Parking in small city parking spots isn’t hard thanks to the cameras in the front, sides, and rear, but sometimes it did get stressful because spots weren’t large enough for this beast and I didn’t really want to damage a brand new $75k+ SUV.

Depending on individual taste, some cars look good to some people while others hate them. I personally loved the look of the Armada, a lot more than I thought I would. I think it is a great looking SUV, it looks modern and very macho. My neighbor, who drives a Tesla Model 3, called it “a handsome looking car”, you can’t argue with a Model 3 owner.

My favorite view of the Armada is the side view, it just looks so cool due to its size and I absolutely love the third window (for some odd reason). The rear has a box shape and that’s about it, again, I prefer the rear on the Patrol and even more on the Infiniti QX80.

The interior on the 2020 Nissan Armada features a large center stack with a good number of buttons, I wouldn’t call it dated but I wouldn’t call it modern either. I personally didn’t mind it, in many cases good old-fashioned buttons get the job done better than having to navigate through multiple screens just so you can turn on the heated steering wheel. The Armada is a tough off-road type of a vehicle, I think the interior suits the overall look and persona of the vehicle.

The interior features leathers, wood, and soft touch materials. The interior is quiet and feels quite luxurious, everything on the inside (and outside) feels solid. The way the doors make a “thump” sound when slammed shut to the way the various levers, knobs, and buttons feel is very upscale. There’s an abundance of soft-touch materials throughout the cabin, which is what you’d expect in a vehicle in this price range.

The Nissan Armada is a no-nonsense vehicle, it’s a vehicle that would feel right at home at the Dakar rally, but that doesn’t mean it’s short on tech, safety, and convenience features. It comes equipped with pretty much everything we’ve come to expect from modern luxury cars, below is a list of what the Armada can be equipped with, not all options are available on all trims:

The number of body-on-frame SUVs has reduced significantly over the years, however, there still are options available for those looking for a big SUV that comes in this format. These types of vehicles are the not most fuel efficient, but they do fulfill the needs of a particular customer that’s looking for V8 power, large interior, and towing capabilities.

I personally loved driving around in the 2020 Nissan Armada, I liked the styling, the interior space, and the way it drove. However, with the ever increasing price of fuel, I wasn’t a big fan of filling up the gas tank, which you’ll be doing quite often if you mostly drive in the city.

Originally published on December 4, 2019 in Cars