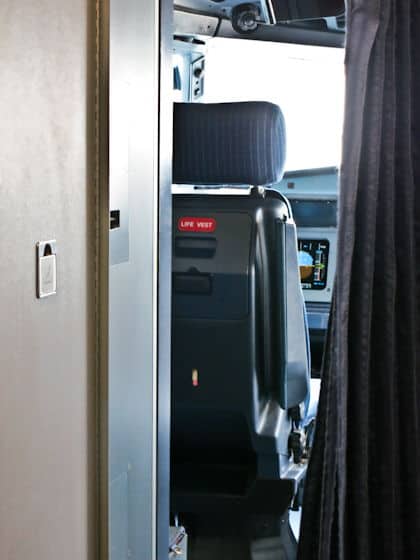 Hangovers are never fun. Especially tequila hangovers, which we all know are the kind of hangovers that feel like an ice pick has been driven into your skull over one eye because we all know that hangovers are always asymmetrical.  Nothing is fun while being hungover, but some activities are worse than others. Sitting in the shower, for example, is bearable. So is watching a Will Ferrell marathon with occasional deliveries of fried foods. On the opposite end of the spectrum, somewhere around “manual labor” and “being anywhere near a group of teenage girls during a Justin Bieber sighting” (the shrieking!) is getting on a plane. And past those, in the hungover twilight zone where only Keith Richards dare tread, is my least favorite hungover adventure ever: racing across Mexico City to try and catch and then board an Interjet plane. All I can say is thank god for Mexico’s Interjet flights.

The cab ride was brutal in its own right. I half wanted to miss the flight, curl up in a ball, and deal with the world in the AM. But that wasn’t an option. I had to catch the flight to glamorous Acapulco if I wanted to be able to stay there. I had booked my flight with Interjet, a family-owned Mexican airline. The concept of flying with a “family airline” was a little harrowing, especially one that had only been formed a few years ago. Still, big American Airlines aren’t exactly knocking it out of the park right now.

I got out of the cab at the airport. My taxi guy was nice enough to get my bag while I leaned over the sidewalk and prayed I didn’t vomit. My Spanish isn’t excellent, but I got that he wished me good luck. I thanked him. I looked at my watch. I had ten minutes. I picked up my bag and started to run. I immediately stopped. I took a deep breath. I wanted the tequila devil out of me, but I didn’t have time for a proper exorcism. The flight was only forty-five minutes, which seemed like an eternity.

I had forty minutes left. I started to run again to the Interjet check-in desk.

I ran into a Mexican dressed as a cowboy. Or maybe he was a Cowboy. Or an Argentine Gaucho? I was running and had my eyes closed because I thought the bouncing visual field in front of me might set me over the edge. He was nice enough to help me pick up my bag, even though I ran straight into him like a dumb animal. Good thing he wasn’t a bullfighter. He would’ve stepped to the side and stabbed me.

Thankfully I was quickly directed to a self-service kiosk, which I used to check myself in. This took like a minute, tops. Security was a pain as always. I took off my shoes, chugged my hangover-curing Gatorade, and walked through the detector. Unfortunately, during the quick search of my bag, they found the bottle unopened bottle of Tequila I had received from the Governor of Veracruz. Usually, I would’ve been mad. It was good Tequila. But at that moment, I couldn’t even look at it. Take the poison away!

I finally made my way to gate twenty-five with the clock ticking to zero. I threw my ticket at the agent and walked onto the plane following the last of the passengers to board. I sat down in my front-row seat and looked into the Airbus A320 cockpit, which still fascinates me (I am not a child). As the plane took off, I noticed something odd. This was the first plane I have ever seen equipped with cameras so that passengers like myself could watch the takeoff and landing. I no longer had to peer out the tiny window to watch the plane lift off the earth. Nor did I need to feel awkward staring at the window, which I know makes the window seat passenger feel uncomfortable no matter how obvious it is that I am looking out the window. As I looked back behind me, I noticed that the airplane appeared different. Maybe a little more spacious? The flight attendant saw me looking back and cheerily explained that Interjet had removed thirty seats from the original configuration of each aircraft. After takeoff, I received one of the most pleasant, smooth plane rides. But it didn’t matter. Once we were in the air, the Tequila monster demanded to have its way. So I ran into the bathroom and did the dirty. Afterward, I exited the bathroom and saw a beautiful Mexican woman approach me down the aisle. I felt terrible for her. Then, as I checked her out as she went toward the bathroom, I realized there was a female-only bathroom on this flight and, it turns out, on all Interjet flights. Thank you, Interjet. You might not be able to save me from me, but you’ve helped me spare others. When I get home to Philadelphia, I’m using the new Interjet service from New York that began in August as much as possible.