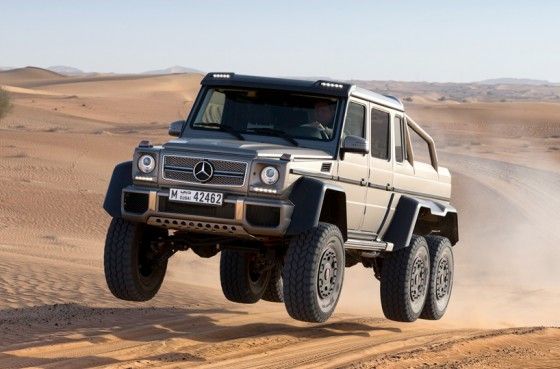 One of the toughest and most capable SUV’s on the market just grew a new set of wheels and is ready to get down and dirty. If you liked the Mercedes G-Wagon XXL Truck then you’ll love this new Mercedes G63 AMG 6×6 SUV. As you can clearly see, there is now an additional axle and a bed much like the customized G-Class truck we showed earlier. The difference between the two G-Wagon’s is that this 6×6 is actually being manufactured by Mercedes-Benz in limited numbers.

Rather than start from scratch, Mercedes-Benz decided to build on a military version of the G320 CDI which was originally made to Australian Army’s specifications and has been in operation since 2011. The Mercedes G63 AMG 6×6 all-wheel drive system uses five differential locks which offer 100 percent lockup of all six wheels and are controllable by buttons on the dashboard.

The engine on this G63 AMG 6×6 has been upgraded to a 5.5-liter bi-turbo V8 engine which produces 536 horsepower and 560 lb-ft of torque. This six-wheel drive SUV has a 7G-tronic seven-speed automatic transmission. The SUV is a four-seater and as you can see, it has adopted the body of a pickup-truck which measures 231.3 inches in length, 83.1 inches in width, and 87-inches in height. Besides being longer, it’s also 8.9-inches wider and 10.7-inches taller than you standard Mercedes G63 AMG 4×4.

The Mercedes G63 AMG 6×6 now had ground clearance of 18.1 inches and approach angles of 52 degrees which is +16 from the stock G63 AMG 4×4. The departure angles are now 54 degrees which is an increase of 27 from the stock version. The SUV now sits on 37-inch tires and the vehicle also features an onboard compressor with four high-pressure air tanks which are fitted along the sides of the under body allowing the driver to adjust tire pressure depending on the conditions of the terrain.

Mercedes claims that the G63 AMG 6×6 will be able to do the 0-100km/h (0-62 mph) dash in under six seconds and an electronically limited top speed of 160km/h (100 mph). The plan is to build 20 to 30 trucks per year. No price figures are available yet but it will be Mercede’s second most expensive vehicle in their model lineup.