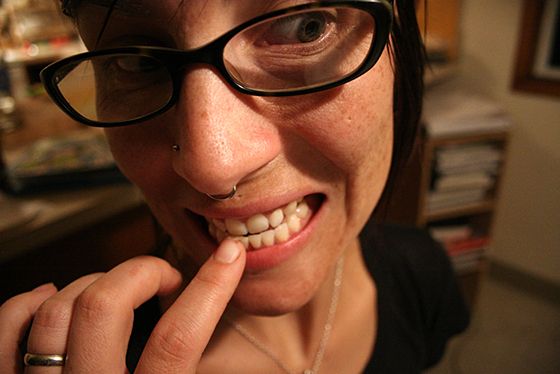 All of us have nasty habits that we’ve picked up along the way. They’re usually minor and seemingly harmless, but still annoying and difficult to stop doing. For me, I couldn’t help but pick at the skin on the top of my fingers. I would chew, bite, and pick until my fingers were ragged and bleeding. It wasn’t a pretty sight, and it took me years and many unsuccessful attempts before I was finally able to stop. Do you know what the worst part was? That the solution was so simple.

Before I explain what worked for me, I want to give you an idea of what didn’t. When I said that it took me years to stop, I wasn’t kidding. I tried all sorts of techniques, such as putting bandages on the fingers I picked at, or covering them in foul tasting goop so that when I bit my fingers, I would taste it and be grossed out. Both of these methods, and many more, actually did work for a day or two, before I inevitably went back to doing the exact same thing I was doing before. Not exactly the ideal solution, right?

How to Break a Bad Habit

A few weeks ago I read an article called How to Lose 23 Lbs in 28 Days. It had absolutely nothing to do with picking at one’s fingers, but it did inspire me to try something new. The author of the article, a worldly fellow named Maneesh, talked about creating good habits. Makes sense, right? Eat properly, exercise, whatever. Well, it was then that I realized I wasn’t replacing my bad habit (finger biting) with something useful. I was creating a void, with nothing else to do when I felt the desire to bite at my fingers. Will power is a resource that’s quickly depleted, and my efforts to simply stop biting weren’t enough; I needed something else.

The trouble was finding a replacement habit that was both positive, and simple enough that I would actually have the willpower to do it. So I made a promise to myself that for just one day, every time I caught myself biting at my fingers, I would go do one pull-up, or one push-up. This meant that in theory, though I was still biting at my fingers, I was aware of it, and slowly replacing the act with something positive.

After just two days of trying out this self experiment, I found myself thinking about pull-ups before even raising a finger to my mouth, or picking at my skin with my other fingers. My subconscious desire to rip at my fingers was completely replaced by the thought of exercising. It’s been weeks now, and outside of my actual workout routine, I haven’t had to do any pull-ups or push-ups as “punishment” for my bad habit. Not bad for just a little bit of work.

The Value of Self Experimentation

The Internet has granted almost everyone unlimited access to a wealth of information surrounding almost every question one can imagine. As an example, there’s a good chance you found this article via a search engine on your quest to stop biting your nails, or doing some other nasty habit that you weren’t happy with. But this information has to come from somewhere, and that’s why it’s so important for people to take the initiative and self experiment so that they can add to that pool of knowledge, or at least provide valuable data.

It was someone else’s idea that set me on the path to breaking my own bad habit, but it was my own self experimentation that finally enabled me to solve a problem that had been plaguing me for years. Hopefully my little experiment is useful to you as well.