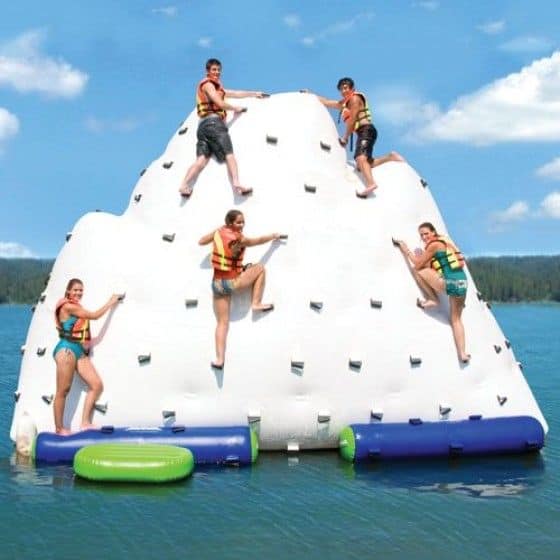 I’ve always thought that climbing mountains such as K2 or Mount Everest would be extremely cool but there are a few things keeping me from going there. Things such as mountain climbing skills, lack of interest in learning the trade, and I absolutely hate cold weather. Just the thought of it is very cool, but other than that, I’m just fine where I am.

But if I could climb “Mount Everest” in hot summer weather, I would be all for it. This is where the Inflatable Climbing Iceberg comes into play. This may not be exactly the same as the real thing but it’s good enough for me. The inflatable mountain is made of commercial grade 28oz PVC fabric and just happens to be material that is to be used in the summer time only and not meant for cold temperatures.

I don’t know about you guys but I sure as hell would rather climb this inflatable thing under the sun in swimming trunks rather than in 40 –lbs of clothing and frost bite temperatures. The inflatable iceberg features handholds on three sides for climbing purposes and the fourth side is completely smooth and can be used as a slide to get back into the water.

The only problem with this Inflatable Climbing Iceberg is the $6,000 price tag.