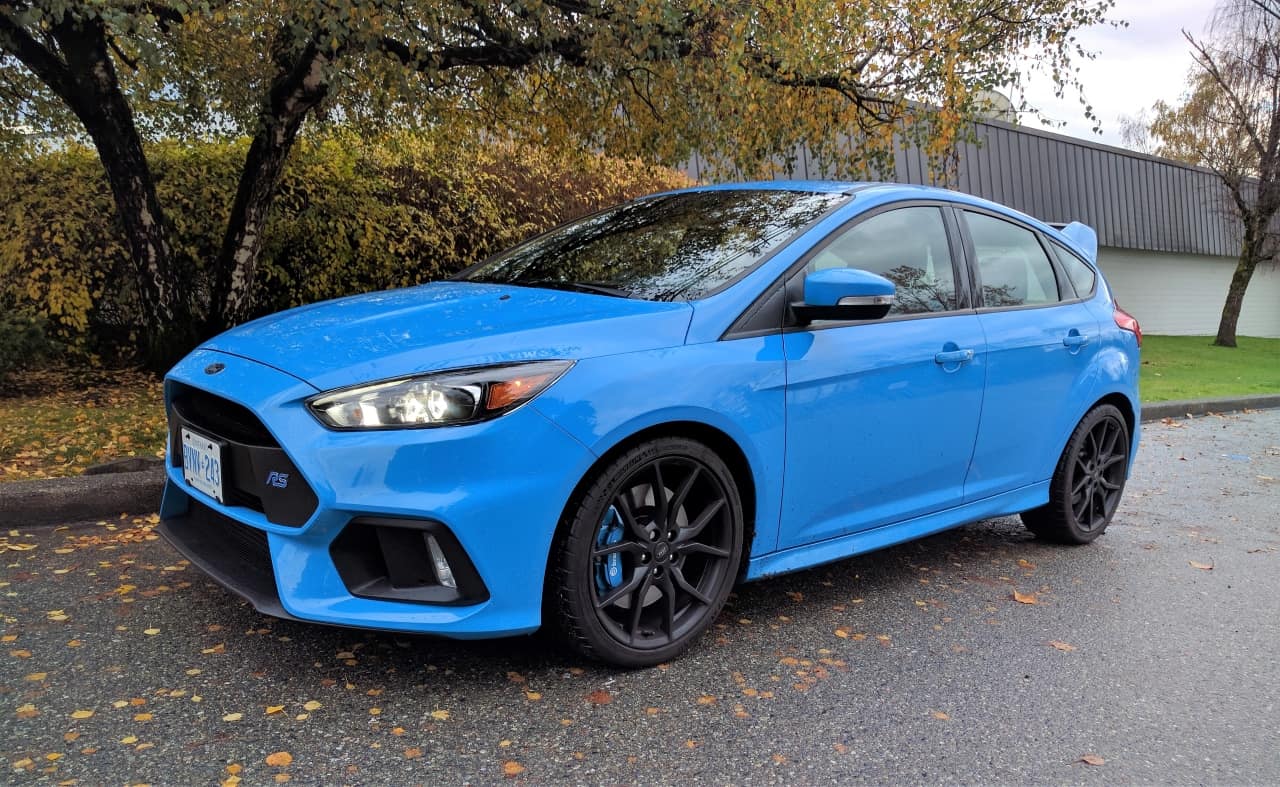 Ford has been on a roll with their performance vehicles lately, out of all the car makers (not including the Europeans), Ford produces the most amount of performance oriented vehicles. Most of these vehicles we’ve already reviewed, cars like the Fiesta ST, Mustang EcoBoost, Mustang GT, Mustang GT350, and Focus ST, and there is also the Focus RS and the upcoming F150 Raptor and Ford GT.

The biggest news this year has been the introduction of the Mustang GT350, GT350R, and the Focus RS. The Focus RS has been available for quite a while in Europe, which has made North American car enthusiasts complain for years because we weren’t offered that car here. But for the 3rd generation of the Focus RS, Ford has finally decided to give us what we’ve been whining for, for many years. The Focus RS mainly competes against cars like the Golf R and the Subaru WRX STi. 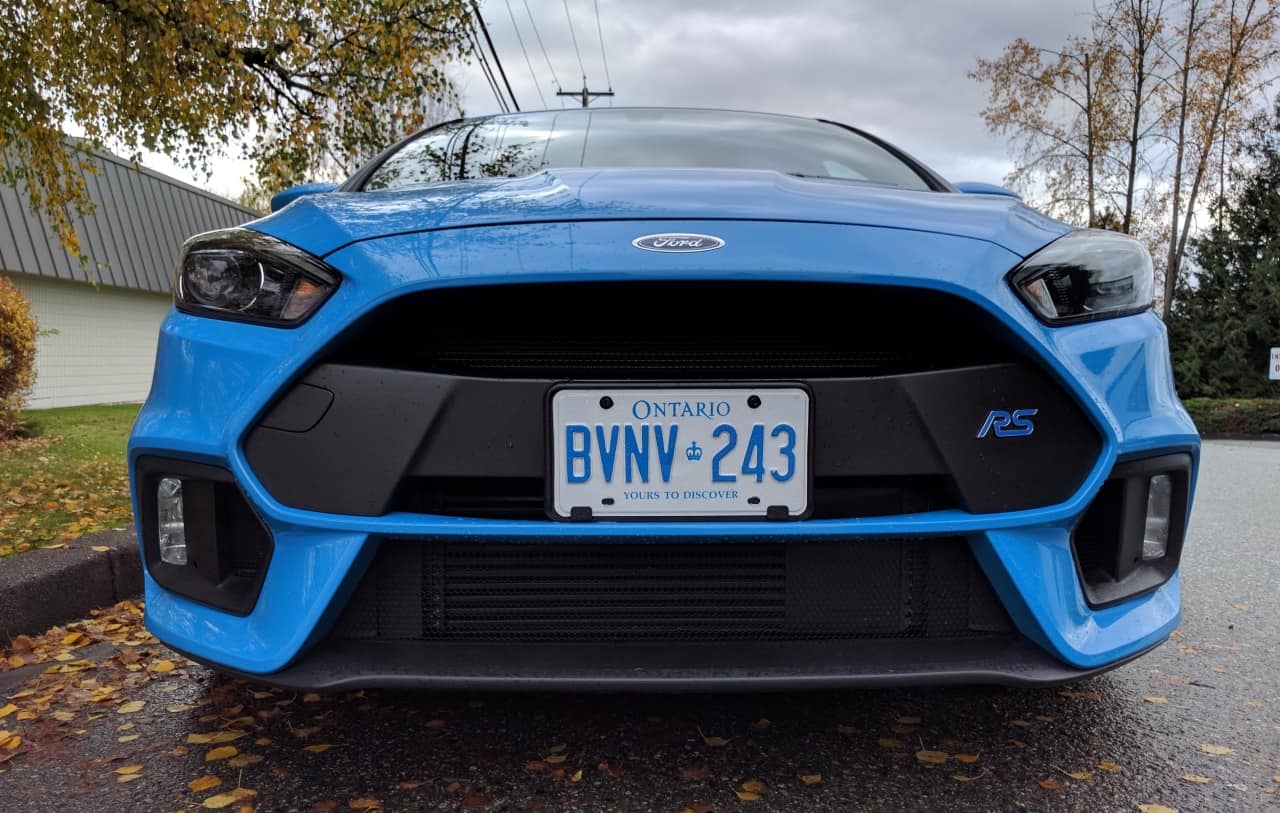 The transmission is smooth and nice short throws, the clutch is also very smooth. People learning to drive a manual always seem to have the most trouble with first gear, it’s hard not to stall the car in first gear. With the Focus RS, you can’t stall in first gear, I don’t know if this is actually a feature or if the clutch has been abused? When you’re in first gear and release the clutch without pressing the accelerator pedal, you’d stall in any other car, but the Focus RS just starts to roll as if you’ve given it gas. 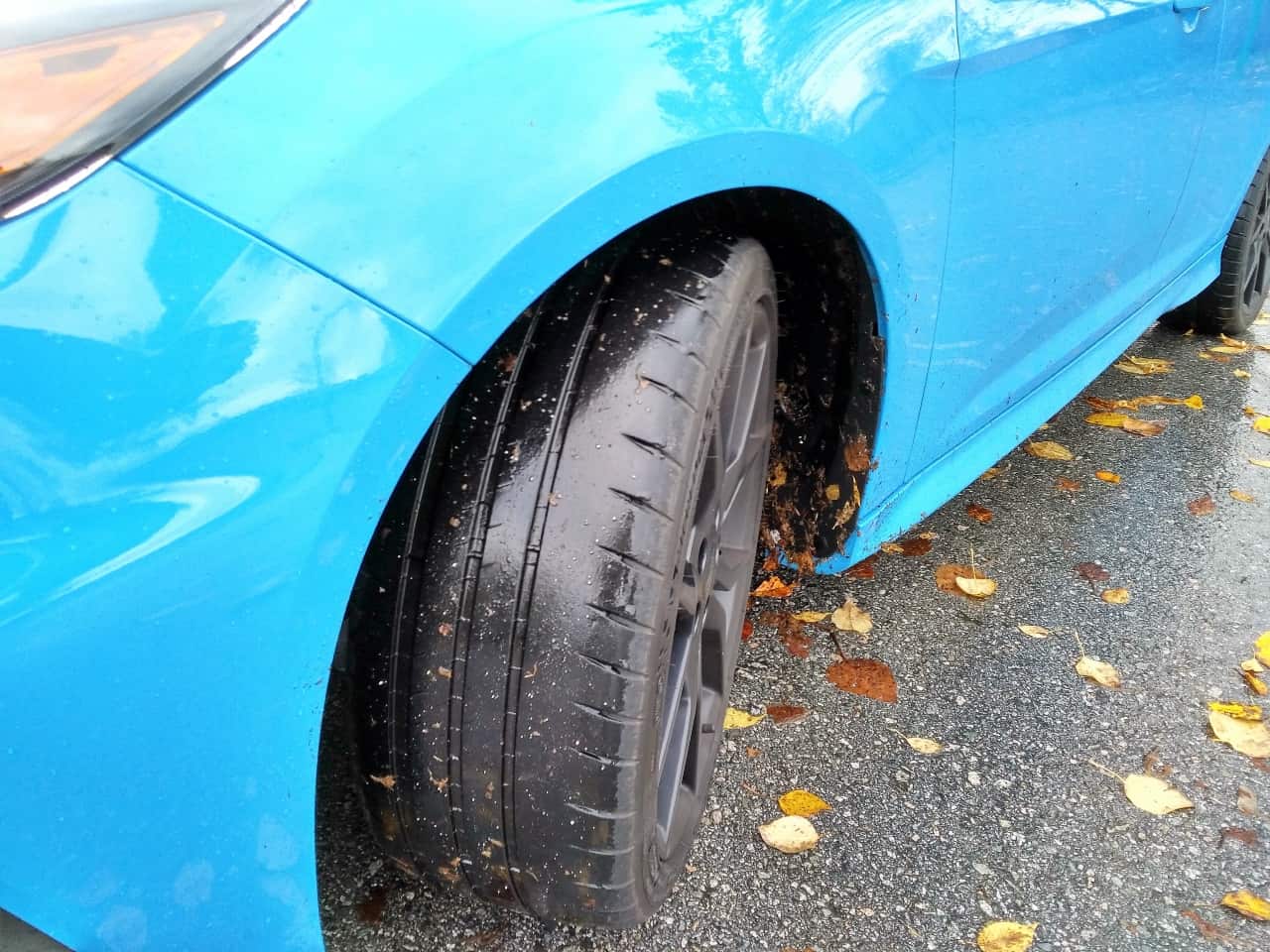 There are hundreds, if not more, videos of the new Focus RS on YouTube, I’m sure you’ve watched at least a handful of these, everyone has been praising the performance and handling of this car. It’s true, the Focus RS is a great handling car, unfortunately for our week-long review, it was pouring rain pretty much every day of the week. However, in the very wet conditions, and the car’s very aggressive Michelin Pilot Sport tires, which have just enough grooves to be called street legal, there was surprisingly good amount of grip.

I was afraid the car would be slipping and sliding in the wet, but the AWD system did a great job at keeping the car where it should be. I can only imagine how much grip there would be on a nice hot summer day.

The 4-cylinder turbocharged engine makes plenty of power and torque when pushed, below 2,000 rpm it feels like a regular Focus, but bring up the revs and the Focus RS becomes an aggressive track weapon that can also be used on the streets (not as a weapon, but as a car). With an aggressive car like this, you’d expect the exhaust to be pretty loud, but unfortunately it’s not that loud nor does it make pleasant sounds, which is a downfall of most turbocharged cars. In “Sport” mode, the exhaust does produces some pops and crackles, but not too much, I did find the engine make a bit more of these sounds when it was warmer outside, so maybe in the summer there’s more sound action from the exhaust.

As I mentioned above, the Focus RS provided a lot of grip even in the wet, which is also attributed to the stiff suspension. This suspension setup does help a lot with grip and handling of the car, but it does become quite bone-jarring in the “Normal” mode. In Sport mode, it becomes even stiffer, I don’t know if I would be able to handle driving the Focus RS on a daily basis for commuting to and from work.

However, the Focus RS doesn’t pretend to be a daily driver/commuter, it is a very focused car and its job is to give the driver the maximum amount of thrills on twisty roads and on the track. If I were to buy the Focus RS, it’d definitely be my second car. 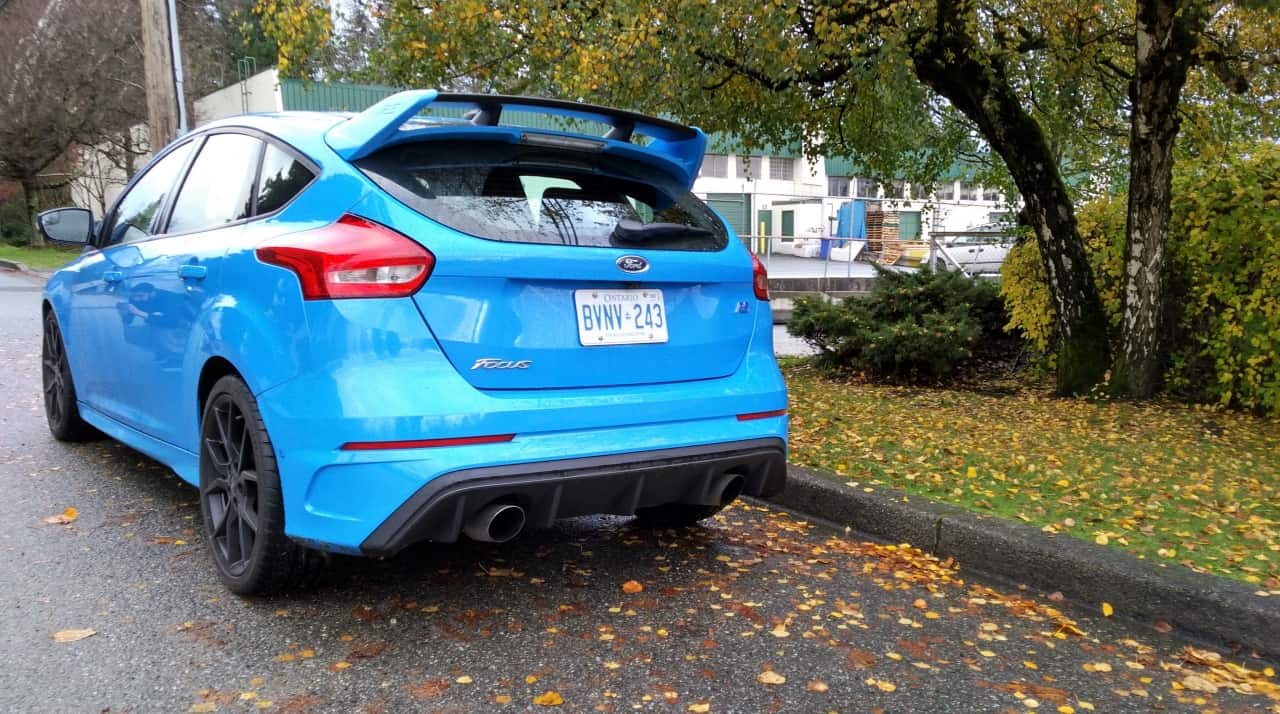 Looks-wise, the Focus RS looks quite different from the regular Focus and even the Focus ST, especially at the front. The front-end is much more aggressive, featuring large front openings for air to come into the intercooler and the engine. The RS also sits lower than the ST, comes with side skirts, and rides on sporty looking 19” black wheels. At the rear there’s a large spoiler and a pair of exhaust tips through the diffuser.

The interior on the Focus ST is a bit of a disappointment, there isn’t really anything differentiating it from the Focus ST, which isn’t much different from the regular Focus. The RS does come with heavily bolstered Recaro bucket seats, which are great for keeping you in place when the car is moving left and right quickly. The Focus ST was also equipped with these seats and I liked the amount of supoprt they provide. 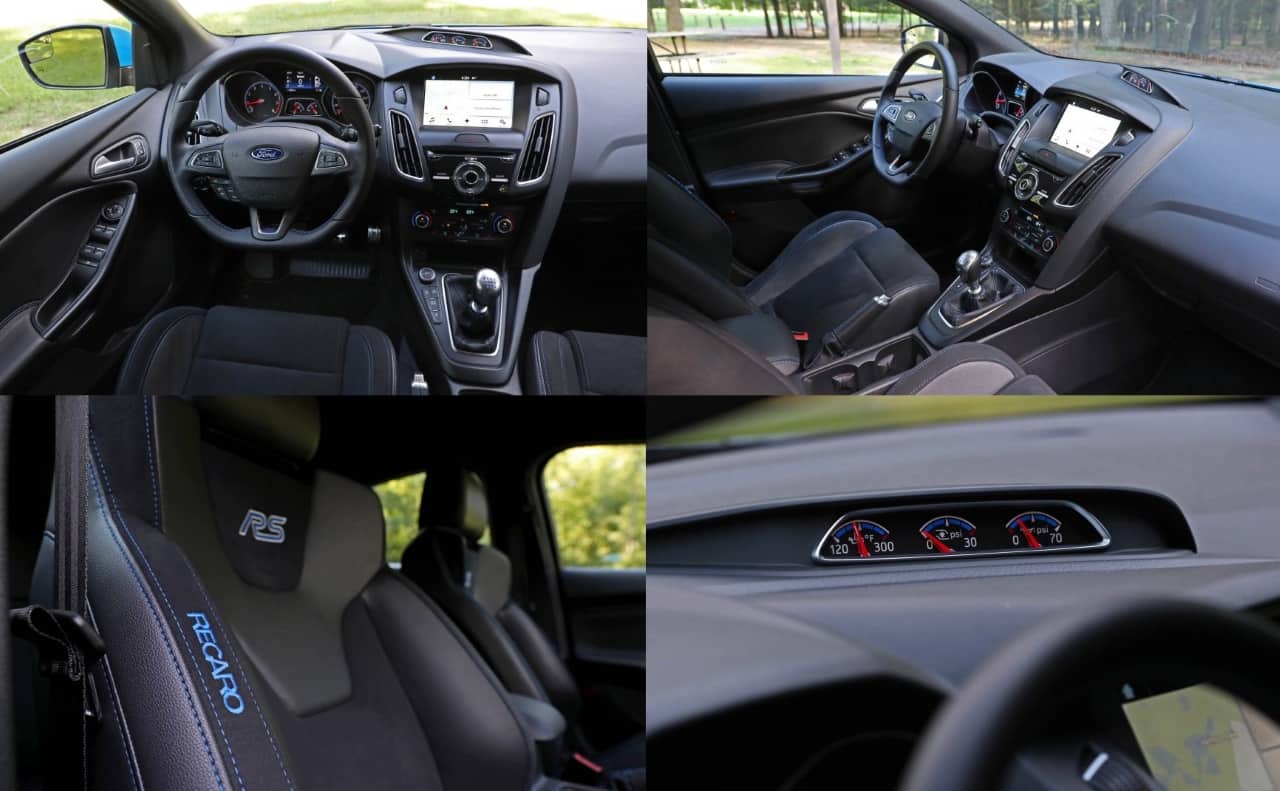 Overall, I liked the Focus RS quite a bit, however, it is on the expensive side, especially when compared to the STi and the Golf R. Both of these cars offer similar performance to the Focus RS, but at a lower starting point.

I did enjoy my week with the Focus RS, even though it was not the best week for performance driving. The Focus RS is a very fun car, you can drive it like a normal car or push the gas pedal and turn it into a beast. It’s not for everyone, but those that understand what RS stands for, will love it.

Awesome Hobbies That Will Make You Feel Like A Real Man