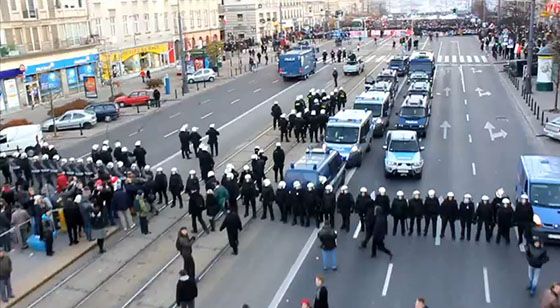 A riot broke out during last weeks Independence Day marches in Poland, and one clever person took a technology that’s quickly becoming mainstream and used it to record a few minutes of footage from the air as the riot unfolded. I’m talking about aerial drones. Used by military organizes for years, these relatively inexpensive store bought civilian models are quickly gaining prominence among hobby enthusiasts, and perhaps soon activists as well. Given the low price of pre-made drones – such as the Parrot AR.Drone ($319 CAD) – these drones are inexpensive enough for many to afford, and simple enough to use that just about anyone can deploy and control them using their cell phone.

The implications are far reaching for both activists and members of the police. The technology may prove useful in helping police agencies identify violent protesters and thugs, while allowing civilians to do the same with law enforcement officers who overstep their bounds. If nothing else, the video provides a unique visual perspective on a phenomenon that’s becoming ever more relevant and widespread. Given the ever failing state of the global economy, I don’t think we’ve seen the last of protests or riots. If only everyone could keep it civil, then perhaps we could make some real progress as a society.