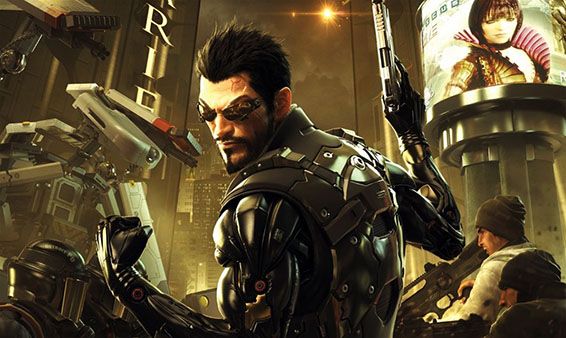 Do you remember when I was obsessed with Deus Ex: Human Revolution?

That was about a year ago now, and let me tell you something: little has changed. Though I beat the game long ago, Human Revolution will forever hold a very special place in my heart. If I’m being honest here, it’s mostly Elias Toufexis I love, but we’ll save that unhealthy obsession for another day.

Last night I decided to sign into Steam for the first time in about a month. I’ve been super busy working (ie: coming up with articles for you shit-heels) and haven’t done a whole lot of gaming as of late. This is a shame for many reasons, but my timing was fortuitous BECAUSE… because, the Deus Ex: Human Revolution Directors Cut came out yesterday! I knew it was on the way, but wasn’t sure about the date, and then there it was!

I Actually Did Ask for This…

In fact, I’ve been waiting quite some time for this particular release. The original version was great, but man… the boss battles, am I right?

So, this is basically what Human Revolution should have been the first time around. I can’t be too mad, because hey, it’s Eidos and Deus Ex we’re talking about, but still… there’s something to be said for longer development cycles. If they had spent just a little bit more time on this originally, we could have had:

And much, much more!

There’s also directors commentary throughout the game (for those who want it), which I’m actually kind of excited to hear. Actually, I take that back… I really only care if it’s Elias Toufexis who’s doing it. David Anfonsi? Pfft, no thanks. JJB? Well… maybe.

In any case, you can order a copy of the game now for every platform in existence, and there are even discounts for those of us that own the original.

Will There Ever Be Another Deus Ex?

You know what? I’m glad you asked! If you haven’t already heard, then I’m pleased to be the person to tell you that David Anfonsi has officially announced that Eidos is actively developing a next generation Deus Ex game. Details are scarce, but we do have a bit of concept art to kick things off.