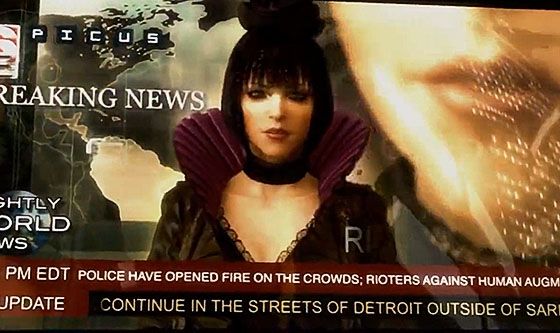 Deus Ex 3: Human Revolution – E3 Trailer In All Its Glory

If you want to make enemies, try and change something.

It’s finally happened. The full trailer for Deus Ex: Human revolution has been released, and I have to say, I’m more excited than ever. I must have watched this trailer a dozen times, largely in part to the excellent music by Michael McCann, which I’m hoping is made available for purchase. (Note: If you’re reading this Michael, work your magic!) Michael McCann has also produced the music for Splinter Cell: Double Agent. Having said that, the visuals are no pushover either; Square Enix, Eidos, and Goldtooth Creative have done an amazing job on the CG.

The trailer goes a long way in alaying my fears of Eidos repeating the same mistakes that made Deus Ex 2 such a failure. Despite the fact that this trailer is CG and not actual in game footage, it seems that Eidos has managed to capture the essense of what made the original Deus Ex such an amazing experience. I think we can all agree that having a character named Chad in the original is what really made the game, and if Eidos is wise, they’ll include another Chad in DE: HR.

Notice the woman’s ass at 0:58 into the trailer? Perhaps that’s Anna Navarre from the original Deus Ex as a young woman.

Have any interesting theories about the trailer? I want to hear them. Leave a comment, or send me an email.