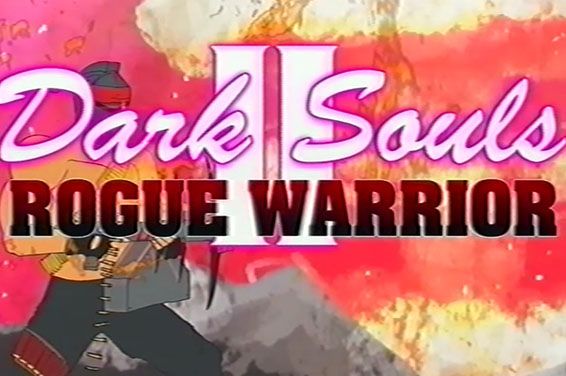 Dark Souls was one of the most frustrating games I never played.

No, I never played it myself – I just watched a friend play – but I could feel his pain and suffering as he died over, and over, and over again. It’s hard to see a friend in such pain, unless you’re very drunk… which I was. Then it’s just funny.

But now Dark Souls 2 is coming out, and I expect more of the same. Will I play it? Actually, I think I will. Let’s just say that I’ve been… inspired.

“They Took His GIRL. Now He’ll take their SOULS!”

Do you remember the 80s? Me neither, but I was born then, so I know it was a time of wonder and mystery – just like me.

The 80s were also a time of really bad great cartoons, like Thundercats and He-Man and The Masters of the Universe. Yes, if Dark Souls came out during the 1980s, I’m sure it would have a show just like this…

Undead by nature…
Unmatched in skill…
All hero.

Just… just one little thing: I’m pretty sure this fellow doesn’t have a machine gun in the game, but maybe I’m just being nit-picky here. The point is that he’s a total bad-ass and exists only to kick undead ass.

The music in this video was pure 80s bliss. No, really… I listen to this kind of music all the time. It’s a guilty pleasure, except that I really don’t feel too bad about it.

If you enjoy it as much as I do, then consider supporting some of the musicians featured. Here they are:

They’ll love you forever, and besides, you’ll get some awesome pumpin’ beats to listen to while you work out at the gym. Cause I’m sure you totally do that.