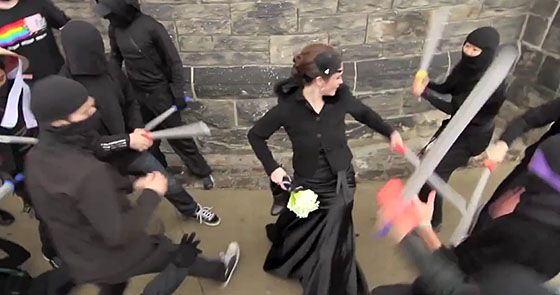 Halloween is just around the corner, and I’ve decided to go as a ninja this year. When street battles between ninjas and samurai were a daily affair, the ninjas would act like complete d-bags and prance around tossing shurikens at the samurai before vanishing back into the shadows. It’s for this reason that ninja costumes are great, and I plan to do the ninja justice by following such an example.  Being a ninja is tough work, and I needed a bit of guidance from ninja masters who have already braved the Canadian mean streets.

Improv In Toronto recently organized and filmed a group of would-be ninjas bounding around the university campus while confusing the hell out of absolutely everyone they came in contact with. Between running full-bore at strangers, and twirling their plastic swords around while jumping like idiots, the ninjas managed to engage in combat with a slew of non-ninja students and passersby. Hell, even a Ninja Turtle got in on the action.

My favorite part of the video is when a fellow in a business suit picks up a foam sword and takes on a legion of ninjas by himself. He was a good sport about the whole thing, especially given that the ninjas were trying to smack him with their foam swords. Were I surrounded by a bunch of larper-esque ninjas, I doubt I would be half as composed.

If you’re looking for more of Improv In Toronto’s handiwork, you’ll find plenty at their official website. They seem to organize all the time, including pantsless subway rides. Now that’s something I can get behind.