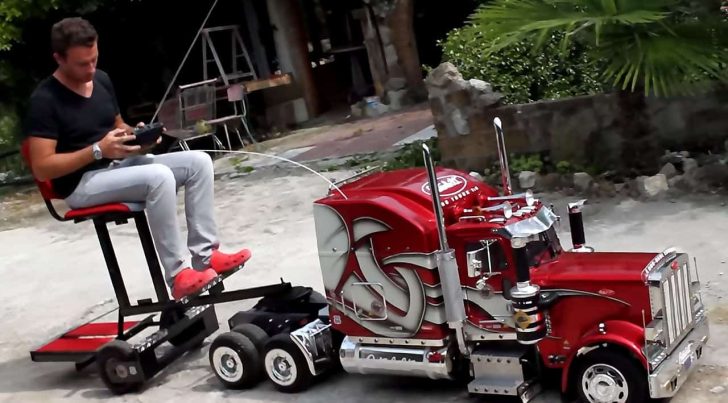 So what do you get when you have one bored Italian dude, a love for big-ass trucks, and some deep pockets? When those three things are combined, we get is one sweet project: a Peterbilt 359 1:4 Scale RC Truck model.

Some of you guys may have seen videos months ago of a 1:4 scale RC truck pulling an SUV along a driveway or doing other crazy tasks. There was not much information available initially, but new details have surfaced about the build.

The remote-controlled custom truck was built by Bordin Luca of Italy.

Luca was inspired to build the truck after viewing a video online of a man driving a model truck. Being a fan of American trucks, Luca took it upon himself to build the Peterbilt 359. The projected started off with the construction of the cabin out of fiberglass and using a wooden frame. The chrome that can be seen on the truck is actually plastic which has been polished to resemble chrome.

The chassis of the truck was built using two 1.5mm thick steel pipes which is sufficient enough for the scale model truck. As for the power plant of this truck, Luca used a 36-volt 750 Watt electric motor which drives the twin rear wheels using a sprocket drive chain. Although the truck looks fantastic, it lacks in the sound department as the scale model is using an electric engine and not a combustion engine. To overcome this issue, Luca installed a Tamiya sound model which simulates the sounds of a real truck. An audio amplifier and two coaxial speakers are also installed to make sure the truck can be heard by the whole neighborhood.

Borin Luca is all about attention to detail. What truck is complete without a proper horn? Luca has also installed a two-tone horn and even a device to make smoke for the exhaust pipes. The project took Luca nine-months to complete and weighs in at 180 kg (397 pounds). The truck model is 2.10 meters in length but Luca also plans on building a 5-meter long trailer for the custom 1:4 scale truck. To see more random videos of the truck in action, check out his YouTube channel.

The Peterbilt 359 1:4 Scale RC Truck model is based on the very popular Peterbilt 359 truck. The truck was originally produced in the late 1970’s and could be customized with many different engine choices, which made it very popular. One of the most popular engines on the 359 was the 3408 Cat engine. The truck came with an aluminum body, which made it corrosion proof and reduced weight. There are still plenty of these truck on the road, almost 40 years later. It is a testament to the great quality of this truck and that’s why it’s still dearly loved by truckers and non-truckers alike.