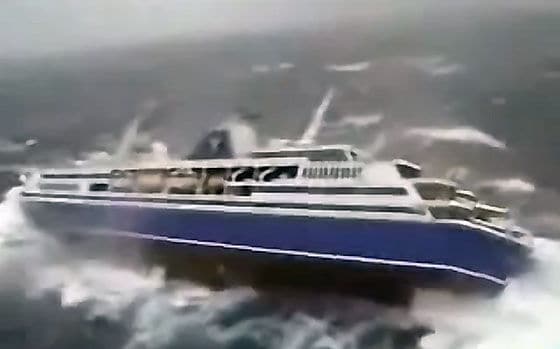 I keep trying to convince a few friends of mine to go on a cruise with me, but they always tell me that they avoid them for fear of getting seasick. Well, after watching this video of a cruise ship in the middle of a bad storm, I’m starting to see where they’re coming from.

The video below was taking from inside the Pacific Sun after it encountered a huge storm about 400 miles off the coast of New Zealand. The cruise ship faced 25-foot-tall waves and heavy winds… waves and winds big enough to make me want to vomit just from watching this clip. The music in the video makes it a bit easier to watch, but one can just imagine how scary it actually was on that August 1st afternoon.

Now, if you’re a kind and gentle soul, you’re probably wondering what happened to the passengers and crew. Well, fortunately, all 1732 passengers made it home safely with only 42 people being injured. What kind of injuries they sustained, I haven’t the foggiest; I just hope they were given some kind of compensation. People pay for a crazy ride when they go to an amusement park, but probably not when they decide to take a cruise.

Next time you decide book with a cruise line, make sure the ship has a good track record. The winds that battered the ship in this video were moving in excess of 50-knots, which is pretty damn hefty. Believe me, you wouldn’t want to be on this thing if the ship were anything less than sound and sturdy.