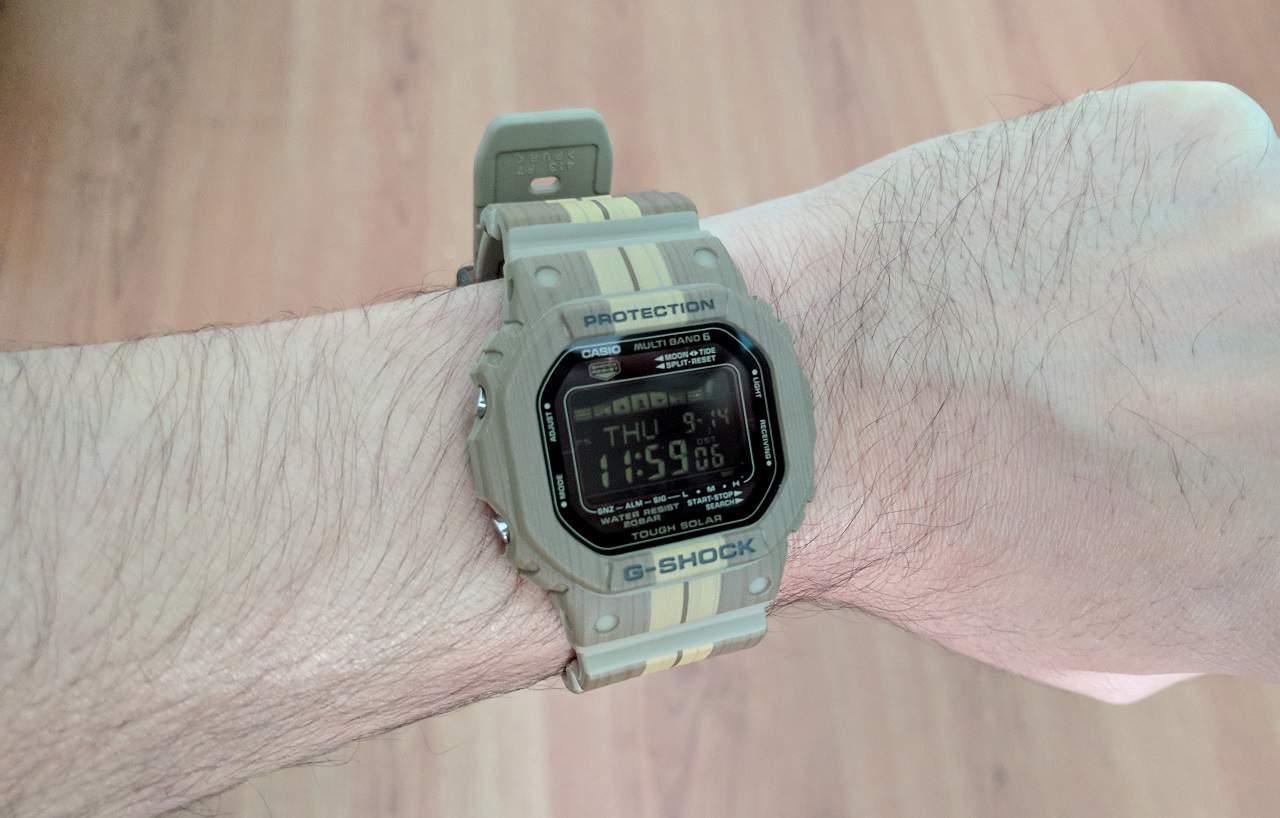 This summer Casio introduced some surfing inspired watches to their G-Shock lineup, more specifically the Gwx5600wb-5 to their G-Lide collection of watches. The new additions included two watches that were inspired by the water and waves, and two that mimic the design of surfboards, in white and wood-tone.

Why? Because apparently these watches are favorites by surfers.

We were provided with a G-Lide GWX5600WB-5, which is the brown model. This watch looks like it’s made from some sort of wooden material, a trend that was quite popular a few years ago, but it’s actually made from the same shock resistant resin/silicone material that all (or most) G-Shock watches are made out of. The entire watch body is brown with some dark brown lines, giving it a wood grain look, in the middle there are two tan stripes, which is reminiscent of a surfboard with stripes on it. 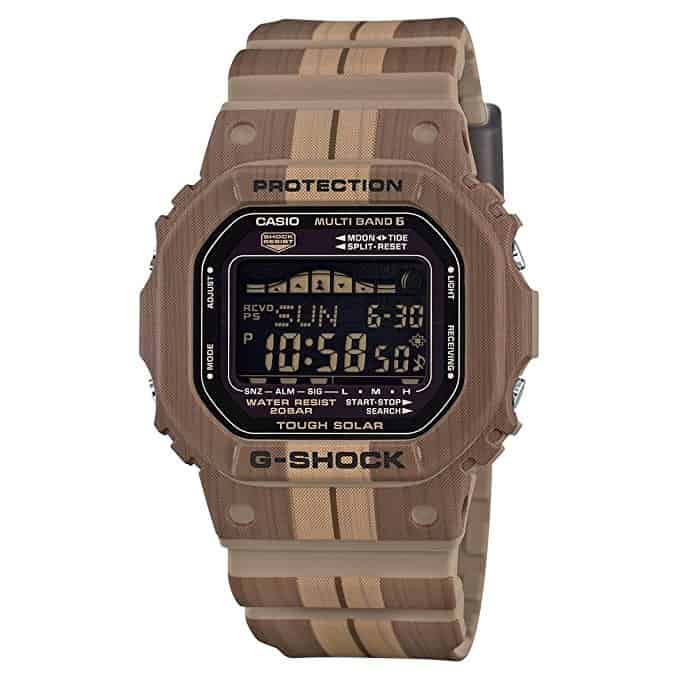 The Casio G-Shock G-Lide GWX5600WB-5 comes with the standard features we’ve come to expect from G-Shock watches, such as multiple alarms, countdown timer, 12/24-hour formats, day/date, multiple time zones, 200 meter water resistance, and a shock resistant body. The GWX5600WB-5 also comes with additional features like atomic time keeping with auto receive function, the watch automatically receives signals up to 6 times a day to keep the most accurate time. The GWX5600WB-5 is solar powered, with a full charge it can function for up to 10 months without being exposed to light again. The watch also comes with tide graph, which is a useful feature for surfers, and it comes with a moon phase data.

This is the third G-Shock watch I’ve reviewed, and it’s the biggest and has the most features. I normally like smaller watches and have always favored watches in the 40 to 42 mm range. The G-Shock GWX5600WB-5 is 48.9 mm, it’s by far the biggest watch I have ever owned, but it doesn’t look big at all, I was expecting it to look ridiculous on my smaller wrist, but it looks just fine. The next biggest watch I own is the Black Out Series G100BB-1A, which measures 47.8 mm, a bit smaller than the G-Lide watch, but because of the rectangular/square body of the G-Lide GWX5600WB-5, it feels smaller than the GB100BB watch. The watch sits comfortably on the wrist and it feels light, the straps are soft yet durable. The watch is easy to read, it does feature reverse LED display with a black background, but the time and graphs etc are easy to read and the watch comes with a light to make it easier to look at the time in darker places.

Setting time on this watch is even easier than other G-Shock watches (which is already easy enough), all you have to do is pick your time zone and the watch will automatically set the correct time according to the signal received from the atomic towers. You can also manually adjust the time, since the time is not always correct initially, which was the case with my watch. But according to the manual, if you let the watch sit overnight, when it receives signal in the middle of the night, it should adjust. My watch was initially one hour behind but after leaving it next to the window overnight, the watch had adjusted to the correct time. I could’ve manually adjusted it, but I wanted to see the automatic update do its thing, which it did. The G-Shock G-Lide GWX5600WB-5 is a bit of a different take on the popular G-Shock line of watches, I really like the wooden look of the watch and like all the additional features of this watch, even though I don’t really have a need for incoming or outgoing tides, but I’m sure it’s useful for surfers. The G-Lide GWX5600WB-5 is currently priced at $160 US and can be ordered online or at authorized G-Shock dealers. For more info on this and other G-shock watches, visit gshock.com. How to Make Money as a Personal Trainer