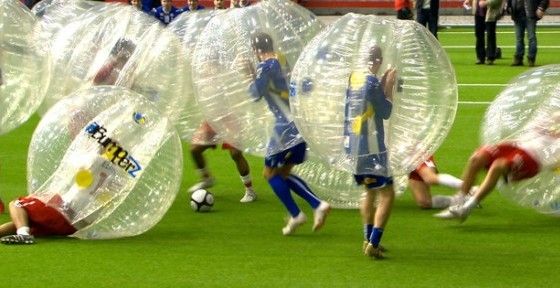 Boblefotball – Have You Got The Balls For Bubble Soccer?

Soccer is one of those sports that somehow manages to simultaneously maintain both the most ravenous die-hard fans in the world, and the attitude that most footie players are giant wussbags. Largely, this comes down the the fact that tackling vs. foul tackling is hotly debated, and acting as though you may die right there on the pitch is pretty common (especially when someone kicks nowhere near you.) The best way to man soccer up a bit? Let everyone smash the shit out of each other all the time- but don’t worry for the pretty faces of your euro stars… Boblefotball is here, and it means bubble soccer; you’re going to want to see this video.

Boblefotball / Bubble Soccer – Simultaneously the Best and Worst Thing to Happen to a Sport, Ever 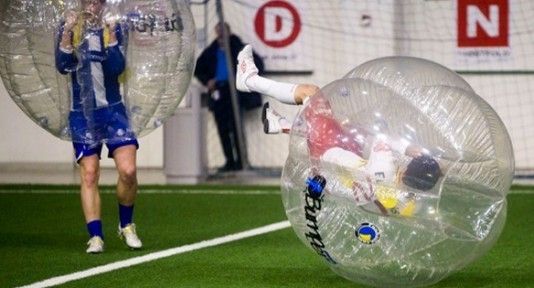 The video clip below from a Norwegian comedy sports TV show called Golden Goal. Two of the presenters decide to join up with some bubble soccer players to test out the game hands on. There are almost no adequate ways to describe the hilarity that ensues, as soccer players dash wildly around the pitch, slamming into each other, acting like assholes, falling down comically and flailing their legs wildly like overturned turtles. Watching the players bump balls (yikes) and roll around in an armless goal celebration is somehow both uplifting and supremely saddening, like a dog with wheels for back legs. What’s even better, is that Boblefotball is constantly referred to as “Funball,” due to the manufacturers of the clear plastic inflatable bubbles- yes, there is a company called Funballz that is in no way related to the adult industry. In fact, they’re you’re go-to people if you want to buy Zorbs, water balls, bubble soccer balls, running balls, and anything you can stuff yourself inside of with the purpose of supreme idiocy and impaired vision.

What really makes these things are a few of the features. You have handles to help keep you inside of the bubble, but they’re located just under your chin, which makes for everyone looking like a drunken Irish bar fighter. You’re pretty much completely unable to turn around or see properly in any direction but straight, which means hardly anyone realizes a hit is coming. I’ve also noticed that the top is open so you can breathe (details, details); all I see there is the potential for friends to dump stuff on your unprotected head as you roll around desperate to escape and unable to fight back. I can’t help but wonder how  fun these would be for every day life. I know for certain that I would become an even worse person and would knock down everyone in my immediate vicinity at all times, just to watch them roll away down a hill, bounce off a wall, or hope they puke in their own bubble. I would never stop running and jumping, because what little self restraint and instinct for preservation I still maintain would immediately be banished. In short, someone buy me one of these post-haste. I swear it’s just because I want to play bubble soccer, and not because I plan on demolishing a children’s birthday party or anything. 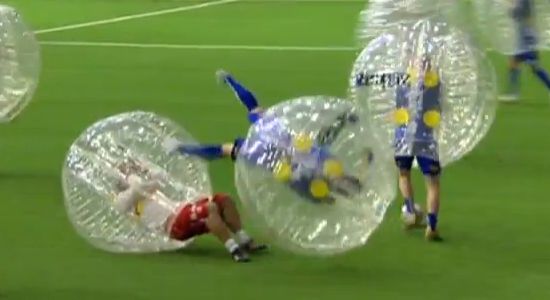 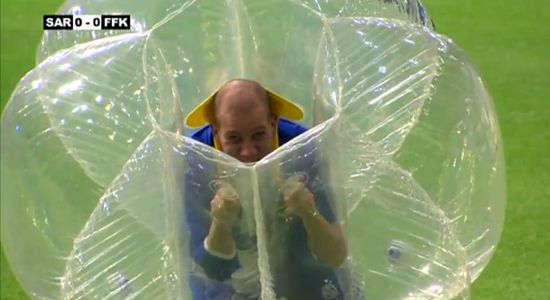