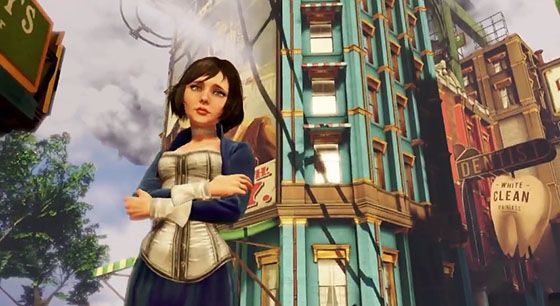 Bioshock Infinite is on its way. Slowly but surely Irrational Games is releasing more pictures and footage from the game, and based on what I’ve seen so far, we’re all in for a real treat. Ken Levine did an excellent job on the original Bioshock, and I’m glad that he’s once again taking the wheel. His work style is interesting to say the least, doing things like only writing the Bioshock story late in the development cycle after much of the other development had been done, but it seems to work for him. Oh, and he’s also willing to speak his mind, a trait which I greatly appreciate in this age of lawyer speak. Candor goes a long way in my book.

This Bioshock Infinite trailer is from this years Spike Video Game Awards (VGA), and though the choice of music is strange, we do get to see quite a bit of new and interesting footage. Based on what I see in the trailer, the world is in a state of depression. We see poor and dejected people standing infront of hand painted signs asking for money, and for access to a doctor. The world looks like it’s on the verge of collapse, the perfect set for a fantastic game.

In terms of the visuals, well… see for yourself. The game looks stunning, and most importantly to me, the characters all look extremely emotive – especially the large breasted lady. In a time where many games have characters with dead eyes and flat, poorly done facial animations, I’m happy to see something that looks a bit more realistic.